Enrique Esqueda scored the only goal of the match as East Bengal beat Minerva Punjab 1-0 to stay in I-League title hunt. 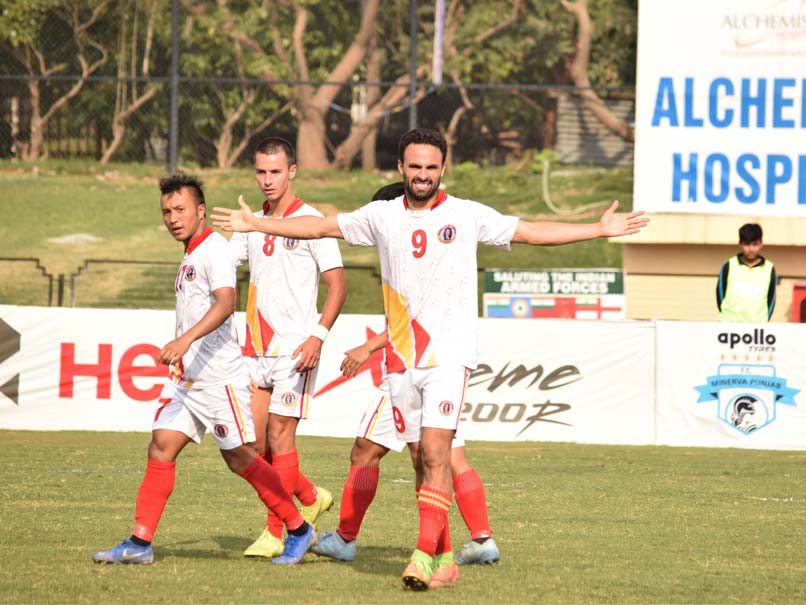 Enrique Esqueda scored the winner for East Bengal in the 75th minute.© I-League

The race for the I-League title is almost at its culmination but there is very little to separate the teams at the top. Kolkata giants Quess East Bengal's crucial 1-0 win over Minerva Punjab FC at the Tau Devi Lal Stadium in Panchkula on Sunday put them just a point behind league leaders Chennai City FC. Having played 19 games each, Chennai City currently head the table with 40 points, followed by East Bengal, who are on 39 points. Churchill Brothers are third with 34 points while Real Kashmir FC are fourth with 33 points but have played 18 games.

On Sunday, the defending champions started the game strongly with a high press helping them enjoy a good spell of possession in the first few minutes. But East Bengal were solid in the middle and stopped the opposition from making any attacking threat.

Much of the first quarter was mostly played in the middle of the park with chances hard to come by.

East Bengal, with their urgency for a win, did try pressing hard but a disciplined Minerva defence ensured that the visitors did not get an opportunity to draw first blood.

Esqueda, Santos and Ralte combined well to come close to scoring twice, but some great keeping by Arshdeep and the woodwork contributed to the first 45 minutes of the game remaining 0-0.

The second half began with East Bengal taking the initiative to in search of the opening goal but failed to find a way past the Minerva defence.

Minerva, on the other hand, kept attacking in short bursts through the combination of Juan Quero and Sreyas VG.

East Bengal, however, came really close to scoring on a couple of occasions but some exceptional goalkeeping by Minerva's Arashdeep ensured that the visitors did not get the elusive goal.

Minerva, who were playing an organised game, somehow gave way to the visitors, when a wrong clearance saw Enrique Esqueda make no mistake in grabbing the opportunity and finding the back of the net in the 75th minute.

The game, thereafter, saw both teams playing more attacking football with Minerva doing all they can to grab an equaliser, while East Bengal hoped for an insurance goal.

The game finally came to an end with Minerva Punjab FC losing 0-1 to East Bengal.

Comments
Topics mentioned in this article
iLeague Football
Get the latest updates on IPL 2021, check out the IPL 2021 Schedule and Indian Premier League Live Score . Like us on Facebook or follow us on Twitter for more sports updates. You can also download the NDTV Cricket app for Android or iOS.