Hugo Lloris hopes France can give Antoine Griezmann a fitting way to celebrate his 100th international appearance by winning the Nations League. 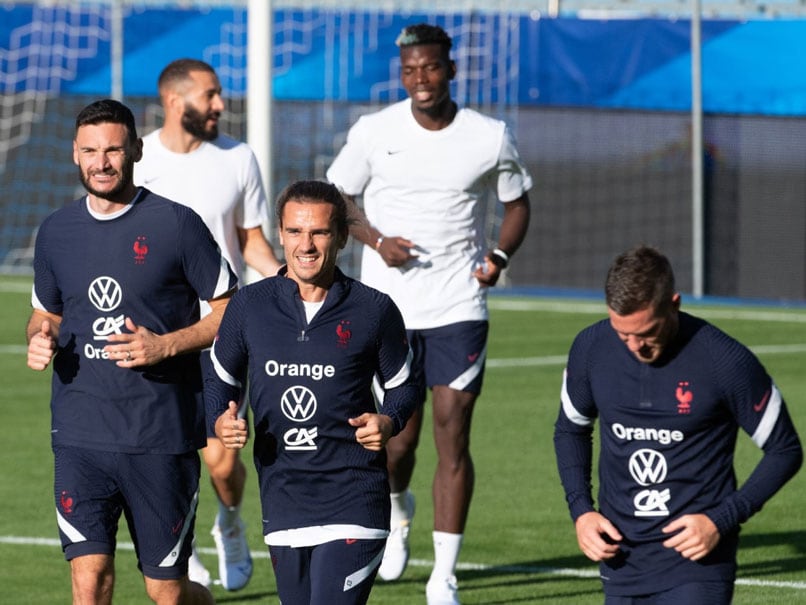 World champions France will take on Spain in the Nations League final on Sunday.© AFP

Hugo Lloris said on Saturday that he hopes France can give Antoine Griezmann a fitting way to celebrate his 100th international appearance by winning the Nations League. Les Bleus head into Sunday's final at the San Siro with Spain after a thrilling semi-final win over the world's top-ranked team Belgium, and Lloris was full of praise for Griezmann, one of an all-star attacking trident which also includes Kylian Mbappe and Karim Benzema. "It's impressive, it shows how important he is for our team, and how much trust the coach and his teammates put on him," said captain Lloris.

"I really hope we're all happy after the final to celebrate his 100th game."

France are in good spirits thanks to their last-gasp 3-2 win on Thursday at Juventus' Allianz Stadium, but have had to deal with Lucas Digne's muscle injury and Adrien Rabiot testing positive for Covid-19.

Juve midfielder Rabiot was left in Turin after his result came through on Saturday morning, and Lloris said that players did feel some anxiety about the virus despite the worst of the pandemic appearing to be over.

"We are sad for Adrien, it's always disappointing to see a teammate leaving, especially for a final," said Lloris.

"There is always this cloud above us before games, we always have to get tested as Covid is still there. Unfortunately we need to keep protecting ourselves in order to work as best we can."

Coach Didier Deschamps said that fear of the virus "is still there" after learning of Rabiot's test result just before they departed for Milan.

"We did a quick test when we got to Milan and everybody is negative. We only have 21 players but they should all be fit and available tomorrow," he told reporters.

Spain coach Luis Enrique said that France were "the best team in the world, looking at individuals" but seemed confident after watching his team beat European champions Italy on their own patch on Wednesday.

"Football is a great sport in which the team that plays best wins, and I hope that's the case for us tomorrow," he told reporters.

The former Barcelona coach is expected to pick a similar team to the one which impressed in their 2-1 win over the Azzurri at the San Siro, with teen sensation Gavi set to start his second match for La Roja after becoming his country's youngest ever senior international earlier this week.

However Luis Enrique could be without Ferran Torres, whose double sank Italy, as he is still recovering from a foot injury picked up in that semi-final victory.

Antoine Griezmann
Get the latest updates on Fifa Worldcup 2022 and check out  Fifa World Cup Schedule, Stats and Live Cricket Score. Like us on Facebook or follow us on Twitter for more sports updates. You can also download the NDTV Cricket app for Android or iOS.