Manchester City will take on Arsenal in the semi-finals while Chelsea and Manchester United will battle it out in the other semi-final clash. 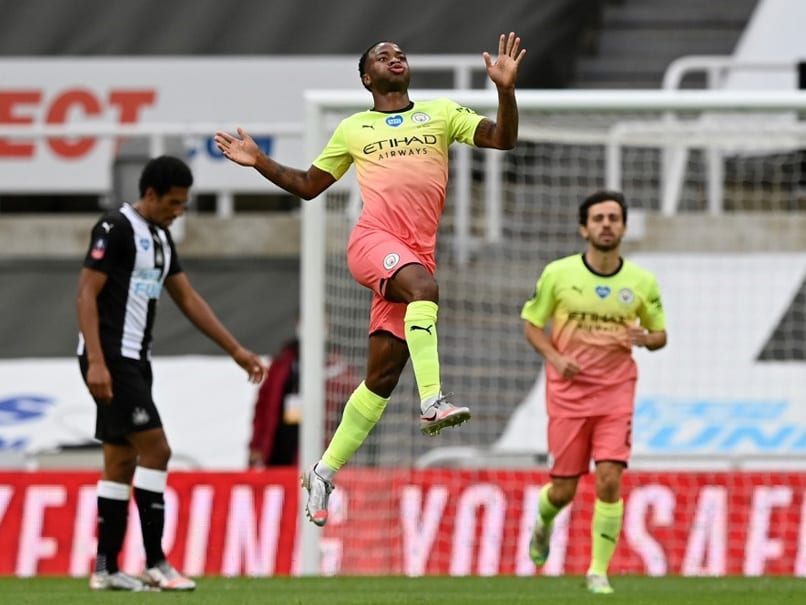 FA Cup: Manchester City will face Arsenal at an empty Wembley in the last four next month.© AFP

Pep Guardiola believes it is easier for Manchester City to focus on cup glory for the rest of the season as the holders reached the FA Cup semi-finals with a 2-0 win at Newcastle on Sunday. Manchester City will face Arsenal at an empty Wembley in the last four next month after the Gunners struck in stoppage time to beat Sheffield United 2-1. Chelsea were 1-0 victors at Leicester thanks to Ross Barkley's winner which set up a semi-final clash with Manchester United. Kevin De Bruyne's penalty and a stunning strike from Raheem Sterling got City back to winning ways on Tyneside after a 2-1 defeat at Chelsea in midweek crowned Liverpool Premier League champions for the first time in 30 years.

"In the Premier League we are struggling to focus," admitted Guardiola. "Now the Cup and the Champions League it is a little bit different."

City were utterly dominant in the first half but had to wait until Gabriel Jesus was pushed by Javier Manquillo inside the box eight minutes before half-time for De Bruyne to break the deadlock.

"We should score more but we played really well and created enough chances to score a lot of goals," said De Bruyne.

"We know it is really weird (to play behind closed doors), it is not something that I enjoy, but we are professionals and we need to keep going. We wanted to respond in a good way. We are happy we are in a semi-final now."

City's eighth league defeat of the season in midweek again exposed the defensive deficiencies they have to solve if they are to add the club's first ever Champions League and another FA Cup to the League Cup they retained in March.

Newcastle had a glorious opportunity to equalise when Dwight Gayle somehow fired over Allan Saint-Maximin's cross.

However, City possess plenty of firepower at the other end and moments later Sterling cut inside to curl into the bottom corner from outside the box to kill the tie as a contest.

Chelsea boss Frank Lampard made six changes to the team that beat City and was nearly made to pay by a very slow start from his side at the King Power.

Harvey Barnes, Wilfred Ndidi and Jonny Evans wasted chances for Leicester as Lampard could be heard bellowing "liven up" at his sloppy stars.

The former England midfielder showed his dissatisfaction by sending on Barkley, Mateo Kovacic and Cesar Azpilicueta at half-time.

Chelsea instantly looked more vibrant after the changes and took the lead in the 63rd minute.

Willian swung in a teasing cross from the right and Barkley got in front of Evans to guide a clinical finish past Kasper Schmeichel.

"It is a learning experience. I could have taken more off. I am not pulling those out on their own," Lampard said after hauling off youngsters Mason Mount, Reece James and Billy Gilmour.

"They will be top players for this club and have top careers. But if I have to do something in games I will do it. They will take it on the chin."

At Bramall Lane, Dani Ceballos fired Arsenal into semi-finals just as the Blades were smelling blood in Sheffield.

United had two goals ruled out for offside by VAR either side of Pepe's penalty and Basham also headed a huge chance wide.

The hosts finally got their reward when David McGoldrick equalised with three minutes left before Emiliano Martinez produced a fine save to deny Billy Sharp a winner.

But in the first minute of stoppage time, Arsenal broke and on-loan Real Madrid midfielder Ceballos slotted low past Dean Henderson from a narrow angle.

"This is a difficult place to get a win. We are back at Wembley. I am really happy with the attitude and performance of the players," Arteta said.

"It is a great opportunity to try and win a title and play in Europe."

Manchester United booked their place in the semi-finals on Saturday but needed extra time to see off 10-man Norwich 2-1.