FA Cup: Chelsea moved into the FA Cup semi-finals as Ross Barkley sealed a 1-0 win at Leicester, while Arsenal joined their London rivals in the last four after a dramatic 2-1 victory against Sheffield United. 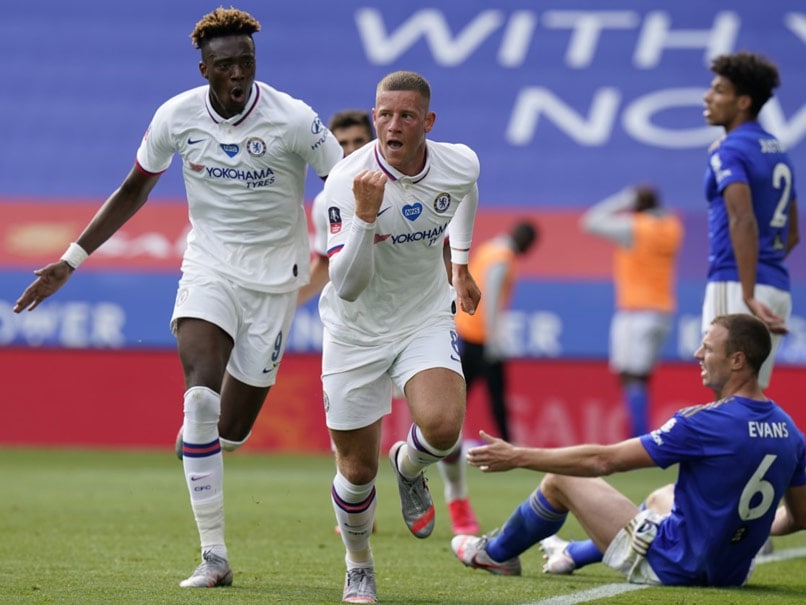 FA Cup: Ross Barkley scored the solitary goal of the match to secure a win for Chelsea.© AFP

Chelsea moved into the FA Cup semi-finalsas Ross Barkley sealed a 1-0 win at Leicester, while Arsenal joined their London rivals in the last four after a dramatic 2-1 victory against Sheffield Unitedon Sunday. Looking to win the first trophy of Frank Lampard's reign, Chelsea recovered from a woeful start at the King Power Stadium. The Blues could easily have been behind before the break, but Lampard rang the changes at half-time and Barkley -- one of the players introduced -- grabbed the winner with a cool finish.

Chelsea's quarter-final success could be a good omen for the Blues, who beat Leicester at the same stage en route to winning the competition for the eighth and most recent time in 2018.

Lampard made six changes to the team that handed the Premier League title to Liverpoolwith a victory over Manchester City on Thursday.

Chelsea were initially out of sorts as a result and Leicester's Harvey Barnes had a sight of goal inside 30 seconds, the winger's heavy touch letting the ball squirt away as he prepared to shoot.

It was a sluggish start from Chelsea and Blues defender Antonio Rudiger angrily admonished his team-mates after snuffing out a Youri Tielemans raid.

When Wilfred Ndidi was given acres of space to head straight at Willy Caballero, Lampard could be heard bellowing "liven up" at his sloppy stars.

There was no immediate improvement from Chelsea and Billy Gilmour gifted possession to Tielemans, who forced Caballero to turn his drive away for a corner.

Christian Pulisic had scored in each of Chelsea's first two games since the restart and the United States winger led their response with a fierce strike that Kasper Schmeichel tipped over.

Chelsea looked more vibrant after the changes, with Kovacic dominating in midfield.

Pressing harder and breaking with purpose, Chelsea took the lead in the 63rd minute.

Willian swung in a teasing cross from the right and Barkley got in front of Evans to guide a clinical finish past Schmeichel.

It was the England midfielder's fourth club goal of the season, with three of those coming in the FA Cup.

There was a worry for Lampard when the in-form Pulisic was forced to come off and needed an ice pack on his leg when he reached the bench.

Azpilicueta blocked a goalbound header from Caglar Soyuncu and Ndidi curled wide as Chelsea held on.

Mikel Arteta's side rode their luck after surviving a second-half barrage from the Blades.

Arteta was Arsenal's captain when they won the FA Cup final against Hull in 2014.

And the Gunners boss remains on course to get his hands on the silverware again as Arsenal look to win the competition for a record-extending 14th time.

"This is a difficult place to get a win. We are back at Wembley. I am really happy with the attitude and performance of the players," Arteta said.

"It is a great opportunity to try and win a title and play in Europe."

Leicester City Ross Barkley Willian Football
Get the latest updates on Fifa Worldcup 2022 and check out  Fifa World Cup Schedule, Stats and Live Cricket Score. Like us on Facebook or follow us on Twitter for more sports updates. You can also download the NDTV Cricket app for Android or iOS.