Manchester United had to work hard for their last-four place as Harry Maguire won it late in extra time at Carrow Road. 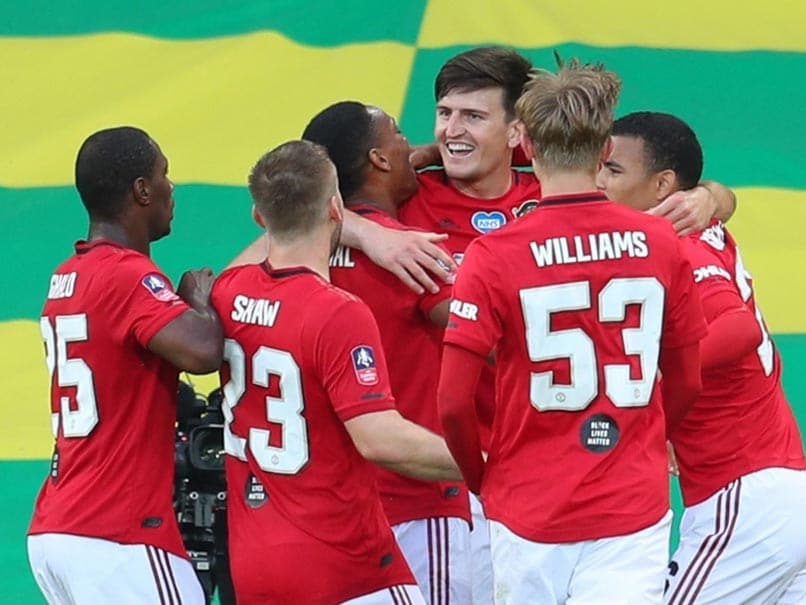 Ole Gunnar Solskjaer believes Manchester United's strength in depth will be crucial to their bid to win the FA Cup after they moved into the semi-finals with a 2-1 win over 10-man Norwich on Saturday. Solskjaer's side had to work hard for their last-four place as Harry Maguire won it late in extra time at Carrow Road. Odion Ighalo's opener was cancelled out by Norwich's Todd Cantwell, but Canaries defender Timm Klose was sent off for hauling down Ighalo in the 89th minute. Manchester United gradually wore Norwich down and England defender Maguire pounced to extend their unbeaten run to 14 games in all competitions.

Man United, who won their 12th and most recent FA Cup in 2016, remain on course to reach the final for the second time in three years.

"I'm delighted to be in the last four. Many of these players did not play the last game and now have 90 or 120 minutes in their legs," Solskjaer said.

"We made many changes so I didn't make it easy for the players. The game was not the greatest spectacle but I felt we kept the ball ok.

"It is great to have the option to rotate. Anthony Martial came on and did brilliant, but Odion Ighalo gives me a chance to rotate.

"He is a proven goalscorer and played his part in both goals."

Exactly 114 days after United won at Derby in the fifth round on March 5, the FA Cup returned following the coronavirus hiatus with the competition's first ever match in June.

Solskjaer made eight changes as only Maguire, Luke Shaw and Bruno Fernandes survived from the midweek Premier League win against Sheffield United.

United's stand-ins were out of sync for much of a first half that followed the pattern of many post-lockdown matches, both teams lacking energy and invention.

In a rare threat, Maguire had to stop Lukas Rupp's shot with an alert block after Cantwell's run opened up the visitors' defence.

Solskjaer's team finally awoke from their slumber after the interval and grabbed the lead in the 51st minute.

Luke Shaw's cross was helped on by Juan Mata and Ighalo sniffed out the chance, flicking an agile finish past Tim Krul from inside the six-yard box.

The Nigerian has scored in each of his four United starts, making it five goals in 11 appearances since he arrived from Shanghai Shenhua in January.

Norwich were playing in their first FA Cup quarter-final since 1992, but Canaries boss Daniel Farke had dampened the mood when he insisted they had no chance of winning the competition.

Suddenly in the ascendancy, Norwich almost won it in the final minutes when Buendia shot just past the far post.

But with extra time looming, Fernandes' superb flick found Ighalo on the edge of the area and Klose's panicked response, hauling down the Nigerian, triggered a red card from referee Jonathan Moss.

Krul made good saves to keep out efforts from United substitutes Paul Pogba and Mason Greenwood in a frantic finale.

With five subs allowed since the lockdown and an additional one given to teams who go to extra time in the FA Cup, United become the first English side to make six changes in the same game when Anthony Martial replaced Eric Bailly.

United dominated extra time and Marcus Rashford's strike was pushed over by Krul, who made an even better save to stop Maguire's header.

Maguire wasn't to be denied and in the 118th minute United's pressure finally told as the England defender poked home from close range after Ighalo flicked on.

Norwich City Harry Maguire Odion Ighalo Football
Get the latest updates on IPL Auction 2023 and check out  IPL 2023 and Live Cricket Score. Like us on Facebook or follow us on Twitter for more sports updates. You can also download the NDTV Cricket app for Android or iOS.