Manchester United reached the FA Cup fifth round thanks to a thrilling 3-2 win over Liverpool on Sunday. 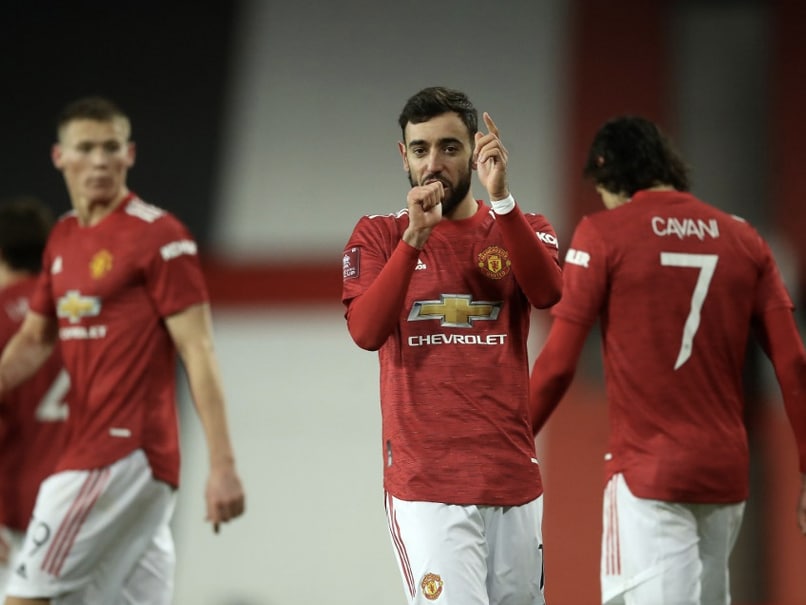 Ole Gunnar Solskjaer hailed Bruno Fernandes's dedication to perfecting his free-kick technique as the Portuguese's stunning strike earned Manchester United a thrilling 3-2 win over Liverpool to reach the FA Cup fifth round on Sunday. Solskjaer handed Fernandes a rare rest from the start with Manchester United leading the way in a tight Premier League title race. But the Red Devils' talisman came off the bench to win a compelling cup tie at Old Trafford, devoid of the caution both sides showed in a 0-0 draw when they met a week ago on league duty.

"When you leave him out like I did today, he stayed about 45 minutes after training yesterday shooting free kicks so I was pretty confident he could score one if he got the chance," said Solskjaer.

"He's never happy with me when I tell him to go inside after training when he's playing the next day, so he got some practice yesterday."

Liverpool's wait for a first domestic cup win of Jurgen Klopp's reign goes on to compound their faltering league form.

The English champions have fallen six points behind United after failing to score in their last four league games.

However, there was hope for Klopp of a revival as Mohamed Salah scored twice.

"If you want to win here you have to be absolutely top and we were not," said Klopp, who is yet to win in six visits to Old Trafford as Liverpool manager.

"If you win a game there are negatives, if you lose a game too but I saw the boys really, really wanted it. We had problems on the counter-attack, it was intense, but there were positives."

Liverpool's only goals in January came against an Aston Villa youth team in the last round of the FA Cup after Dean Smith's side were struck down by a coronavirus outbreak.

Roberto Firmino and Salah's lack of form had seen them dropped for Thursday's shock 1-0 home defeat to Burnley.

Restored to the starting line-up, they combined perfectly for the opener on 18 minutes as the Firmino's pass opened up the United defence and the Egyptian provided a dinked finish over Dean Henderson.

United have made a habit of coming from behind to win this season and took just eight minutes to hit back.

Marcus Rashford's raking cross-field pass just evaded James Milner and Mason Greenwood did not look like a striker lacking confidence as he fired past Alisson Becker for his first goal in 11 games.

A number of injuries to centre-backs have disrupted Liverpool's season with Virgil van Dijk and Joe Gomez expected to miss the rest of the season, while Joel Matip has struggled to stay fit.

Klopp has been forced to field two midfielders in Jordan Henderson and Fabinho together at the heart of the defence in recent weeks and the performance of 19-year-old Rhys Williams showed why the German has been reluctant to rely on his young centre-backs.

Williams failed to cut out Greenwood's through ball for Rashford three minutes into the second half and the England international composed himself before slotting past the advancing Alisson.

This time, United's momentum was short-lived as  Firmino and Milner combined to tee up Salah to smash home his second just before the hour mark.

Both managers turned to their match winners off the bench for the final half-hour as Klopp first turned to Sadio Mane before Fernandes made his entrance.

This week will be the first anniversary of his arrival from Sporting Lisbon that has transformed United's fortunes.

A year ago, Solskjaer's men trailed Liverpool by 30 points in the Premier League having played two games more.

The past seven days have shown they are now more than a match for their old rivals.

Fernandes's strike was a worthy winner of a thrilling tie as he used Paul Pogba to unsight Alisson and fired the ball low into the Brazilian's left-hand corner.

"Before the free-kick, Edinson Cavani told me, 'Try the hard one on the side of the keeper'. I tried it and it went well," said Fernandes.

United will face West Ham in the last 16 next month.

Liverpool Bruno Fernandes Marcus Rashford Mohamed Salah Roberto Firmino Football
Get the latest updates on IPL Auction 2023 and check out  IPL 2023 and Live Cricket Score. Like us on Facebook or follow us on Twitter for more sports updates. You can also download the NDTV Cricket app for Android or iOS.