Tammy Abraham eased the pressure on under-fire Frank Lampard as the Chelsea striker's hat-trick sealed a 3-1 win against Luton in the FA Cup fourth round on Sunday. 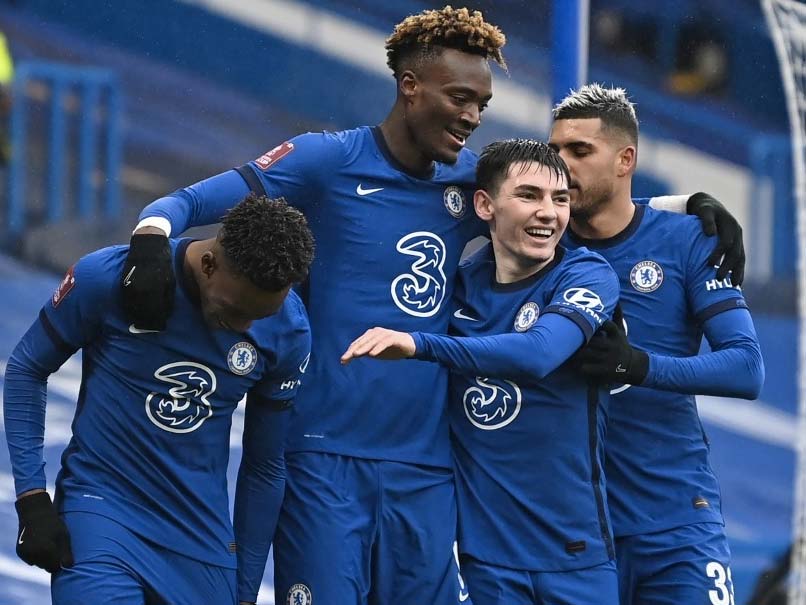 Tammy Abraham scored a hat-trick as Chelsea eased past Luton in FA Cup on Sunday.© AFP

Tammy Abraham eased the pressure on under-fire Frank Lampardas the Chelsea striker's hat-trick sealed a 3-1 win against Luton in the FA Cup fourth round on Sunday. In just his second season in charge at Chelsea, Lampard is fighting to avoid the sack after a wretched run in the Premier League. An embarrassing FA Cup exit against Championship opposition would have pushed Lampard closer to the axe, but Abraham's clinical display gave his manager some much-needed breathing space. Abraham scored twice in the first half before Jordan Clark got one back for Luton after yet another blunder from Chelsea keeper Kepa Arrizabalaga.

Luton gave Lampard some nervous moments after that, before Abraham finally sent Chelsea through to a last 16 tie at second tier Barnsley.

Lampard will know that Chelsea, who were FA Cup runners-up last season, are still a long way from the finished article.

One of his biggest headaches has been the poor form of Timo Werner and there was more bad news for the Germany striker as he missed a late penalty.

After notoriously demanding Blues owner Roman Abramovich bankrolled a £200 million spending spree in the close-season, Lampard was expected to mount a title challenge.

But a dismal run of five defeats in their last eight Premier League games has left Chelsea languishing in ninth place.

Amid talk that Lampard will be sacked if Chelsea don't finish in the top four or fall completely out of contention, former Paris Saint-Germain boss Thomas Tuchel and ex-Juventus manager Massimiliano Allegri have been linked with his job.

Lampard insisted this week that he is a "fighter" capable of dragging Chelsea back into contention for the Champions League places.

But as snow blanketed west London, leaving the Stamford Bridge pitch with a white dusting at kick-off, the potentially treacherous conditions must have alarmed Lampard, who made seven changes from the midweek defeat at Leicester

Standing huddled in a thick winter coat and hat on the touchline, Lampard's fears were initially assuaged as Chelsea made the perfect start.

Abraham was denied by Luton keeper Simon Sluga and Kurt Zouma ahead over before Chelsea scored in the 11th minute.

A quick throw caught Luton napping, with Nathan Jones' side complaining that two balls were briefly on the pitch at the same time.

Chelsea took advantage of Luton's loss of concentration and Werner's deflected cross reached Abraham, who slotted a composed low finish into the far corner from 10 yards.

Abraham's movement was too clever for Luton and the striker netted again six minutes later.

Reece James hooked a cross into the Luton area and Abraham got in front of his marker to power an unstoppable header over Sluga for his 10th goal of the season.

Luton were gifted a lifeline in the 30th minute when James Bree crossed towards Clark and his scuffed shot crept past Kepa's woeful attempted save.

Christian Pulisic, stretching to meet James' cross, was denied by Sluga early in the second half.

Yet Lampard's men remained nervous and Kepa had to make a good save to keep out Harry Cornick's shot after Luton carved open the Blues defence.

Fortunately for Lampard, his decision to send on Callum Hudson-Odoi proved decisive.

Hudson-Odoi surged away down left, played a one-two with Billy Gilmour and crossed low for Abraham to complete his treble from a yard out in the 74th minute.

Werner had a chance to score just his second goal in 16 games when he was tripped by Clark, but his dreadful spell continued as his tame penalty was saved by Sluga.

Chelsea Frank Lampard Football
Get the latest updates on IPL Auction 2023 and check out  IPL 2023 and Live Cricket Score. Like us on Facebook or follow us on Twitter for more sports updates. You can also download the NDTV Cricket app for Android or iOS.