Gennaro Gattuso's side entered the field all wearing the number 10 jersey of Diego Maradona, who won Napoli's only Serie A titles in 1987 and 1990 as well as the 1989 UEFA Cup. 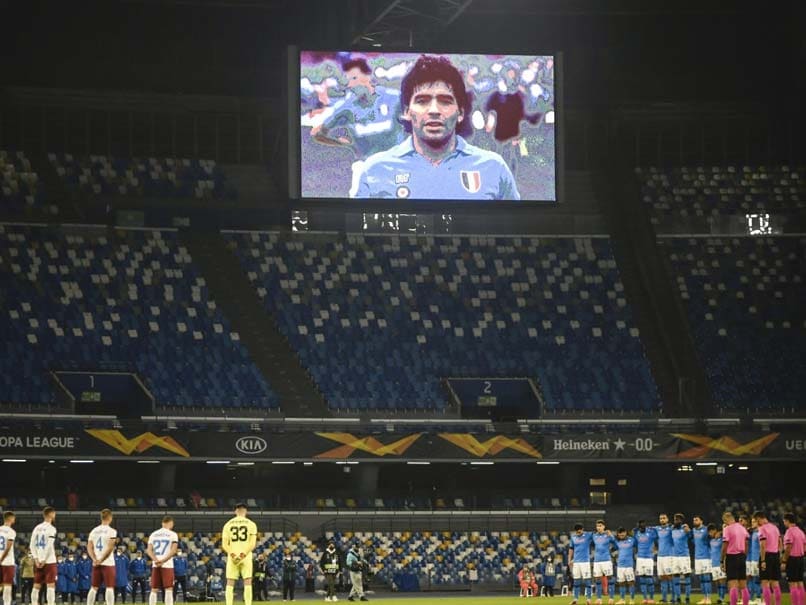 Napoli honoured the memory of Diego Maradona with a 2-0 win over Rijeka.© AFP

Napoli honoured the memory of Diego Maradona with a 2-0 win over Rijeka which allowed them to go top of Europa League Group F in the first match since the death their Argentine icon. Gennaro Gattuso's side entered the field all wearing the number 10 jersey of Maradona, who won Napoli's only Serie A titles in 1987 and 1990 as well as the 1989 UEFA Cup. "Diego is a legend and will never die," Gattuso said after the match.

"Since yesterday you could see that the city breathed a different atmosphere. We hope to dedicate something important to him and win a trophy. In this city, we have talked about it for too many years."

Napoli made sure the fans gathered outside to pay their respects to Maradona weren't disappointed by the current team, as an Armando Anastasio own goal and a simple Hirving Lozano finish sealed the points.

Napoli are now two points ahead of AZ Alkmaar and Real Sociedad following their goalless draw in the Netherlands.

Fellow Italian side Roma made their way into the last 32 with a 2-0 win at Romanian side Cluj, while Hoffenheim joined them after ensuring their respective passages into the next round.

Earlier Jamie Vardy's last-gasp leveller in a thrilling 3-3 at Braga sent Leicester City through to the knockout rounds, where they were also joined by Arsenal thanks to their 3-0 win at Molde.

Leicester looked dead and buried when Fransergio put the hosts 3-2 ahead in the first minute of added time, but Vardy stole in at the back post shortly after to tap in the goal that put the Premier League side into the last 32.

Brendan Rodgers' side are top of Group G on 10 points, three ahead of Braga in second and seven in front of third-placed AEK Athens with two games to play after the Greeks' 3-0 home defeat at the hands of Zorya Luhansk.

Tottenham Hotspur are level on nine points with Group J leaders Royal Antwerp after a 4-0 thumping of bottom side Ludogorets, who are yet to pick up a single point.

Spur's comfortable home win was the stage for an incredible long-range strike from Harry Winks, whose launch from near the left-wing put Jose Mourinho's side three goals ahead following an earlier Carlos Vinícius brace.

However, Winks admitted to BT Sport after the match that he wasn't aiming for the goal.

"I'd love to sit here and say that I did, but I've got to be honest and say no. I saw Gaz (Gareth Bale) run in," said the England international.

Lucas Moura rounded off the scoring in the 73rd minute as the Premier League high-flyers eye an intriguing London derby, with in-form Chelsea at the weekend.

Lille missed out on qualification after they could only draw 1-1 with an AC Milan side missing the injured Zlatan Ibrahimovic.

The Ligue 1 outfit are top of Group H, one point ahead of Milan and with Sparta Prague lurking a further point back after dumping Celtic out of the competition with a 4-1 thrashing in the Czech Republic.

Tottenham Hotspur Football
Get the latest updates on IPL Auction 2023 and check out  IPL 2023 and Live Cricket Score. Like us on Facebook or follow us on Twitter for more sports updates. You can also download the NDTV Cricket app for Android or iOS.