Sarri described Hazard as one of the top two or three players in Europe and said he would like to meet with him. 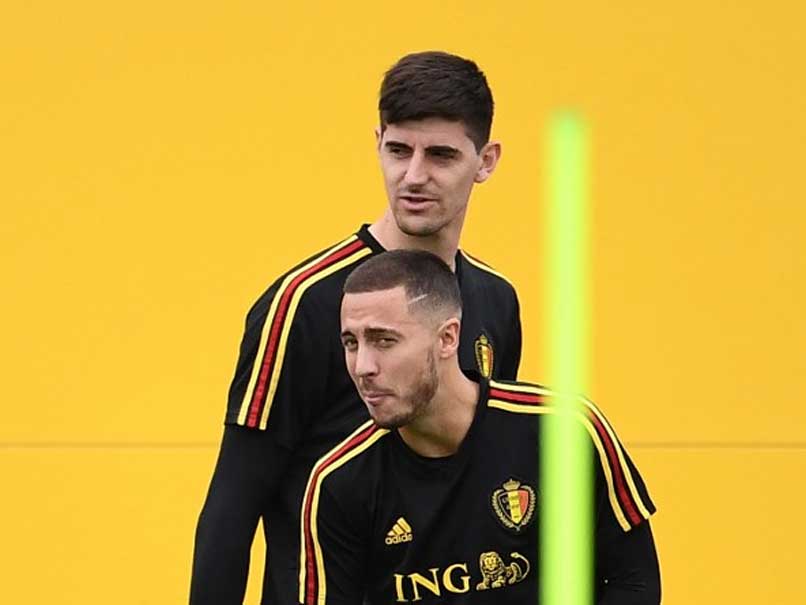 Hazard is on holiday and Sarri admitted phoning him would not be sufficient.© AFP

The futures of star Belgian duo Eden Hazard and Thibaut Courtois can be decided by the Chelsea board said the club's new manager Maurizio Sarri on Wednesday. The 59-year-old Italian speaking at his unveiling, after being appointed the successor to sacked compatriot Antonio Conte, admitted to being disinterested by the transfer market. This will be music to the board's ears as one of the reasons for Conte falling out badly with them shortly after guiding the club to the Premier League title in 2017 was his carping over a lack of say in buying new players and the ones being bought were not of the same level to those who left.

Hazard and Courtois both shone at the World Cup - the latter winning The Golden Glove for goalkeeper of the tournament as Belgium finished a best ever third - but with their contracts running down have been linked with moves to Spain.

Hazard said after the Belgians beat England 2-0 in the third place play-off last Saturday it "Might be time to discover something different," and Real Madrid are prepared to pay a reported £200million ($260million, 224million euros) for the Belgian playmaker.

Sarri, who forged his reputation in charge of Napoli guiding them to runners-up twice and third in his other season, said of course it would be for the better to keep the best players.

"Clearly we would always like to keep all the strongest players," said Sarri, who began in English but switched to his native Italian so he did not "say anything wrong".

"Then we will have to see how the transfer market goes over the next few days.

"I think that I am one of the few managers who is bored by the transfer market.

"I don't want to talk about the transfer market and I'm not that interested in it."

Sarri described Hazard as one of the top two or three players in Europe and said he would like to meet with him.

Hazard, though, is on holiday and Sarri admitted phoning him would not be sufficient.

"A telephone call without looking them in the eye would not give me any certainty," said Sarri.

"I'd like to meet them face to face. I would also like a player to come on the (training) pitch four or five days to have a clear idea."

Sarri, a chain-smoking former banker, said he came to the Chelsea job with an open mind and had chosen not to ask his successor at Napoli and former Chelsea handler Carlo Ancelotti for any advice or insight into a post that has seen many different faces down the years since Roman Abramovich bought the club in 2003.

"Well, for me this is a difficult challenge, but a fascinating one," said Sarri.

"I know this will be an extremely difficult challenge for me.

"I have not asked anything of anyone."

Despite having won no silverware Sarri was named Serie A coach for the 2016/17 season and has praised Conte for what he had achieved in his two year spell at the club.

Conte won the FA Cup last term, but crucially failed to secure them a spot in this season's Champions League.

"This is a post-World Cup time," said Sarri.

"It will take some time to build a slightly different way of playing.

"All good things Antonio Conte did must be left. They must not be changed."

Sarri, whose methods are admired by title winners Manchester City's manager Pep Guardiola, said he would not go into the discussions he had had with Abramovich.

"They have just asked me to build a season to be competitive in all competitions," said Sarri.

"Then during the season we'll see whether or not we want to have more specific objectives."

Chelsea Eden Hazard Thibaut Courtois English Premier League Football
Get the latest updates on IPL Auction 2023 and check out  IPL 2023 and Live Cricket Score. Like us on Facebook or follow us on Twitter for more sports updates. You can also download the NDTV Cricket app for Android or iOS.