This Cristiano Ronaldo was almost unrecognisable from the one that had, less than 24 hours before, been prickly and restless, as he insisted he could leave Real Madrid. 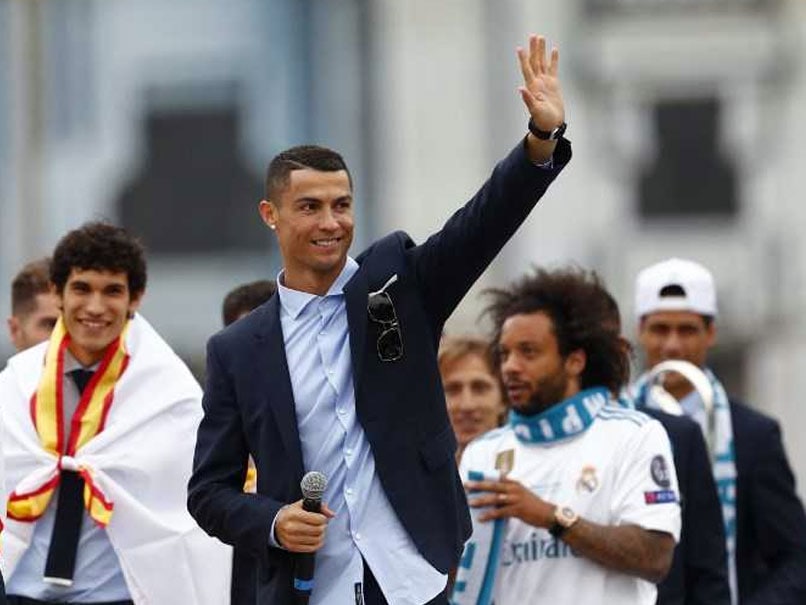 Microphone in hand Cristiano Ronaldo was back at the centre of things.© AFP

As Cristiano Ronaldo milked every last drop of his moment on the microphone at the Santiago Bernabeu on Sunday night, it was hard to imagine this was a player about to leave Real Madrid. Real's players were introduced one-by-one onto the podium and when Ronaldo's moment came, a gap left after "Cristiano" for the delirious fans to fill, he predictably made the most of it. A Portugal flag draped over his shoulders, Ronaldo pirouetted before counting out on his fingers to five, the number of Champions League titles he now owns.

He pulled out the badge on his shirt and kissed it, twice, before blowing a few more kisses to the crowd. By now they were chanting "Cristiano" and some of the Real players were joining in.

Even when Marcelo, the next one out, emerged, the grinning Ronaldo strutted back down the walkway to welcome him with the pair's familiar celebratory dance.

This Ronaldo was almost unrecognisable from the one that had, less than 24 hours before, been prickly and restless, as he insisted he could leave Real, despite them just beating Liverpool to mark a third consecutive European triumph.

Even amid wrangling contract negotiations, a frosty relationship with president Florentino Perez, a perceived lack of support in his row with Spanish tax authorities and perhaps even jealousy over Real's courting of Neymar, his timing was inexplicably bad.

Zinedine Zidane had summed up the mood. "I'm not thinking about that now," he said.

Microphone in hand, however, Ronaldo was back at the centre of things and this time his message was different.

"What can I say?" he said over the supporters' cheers. "You have given us so much love in every single match. It's an honour to play for the biggest club in the world, that's the truth, it's an honour."

As the fans roared, Real's players bounced around Ronaldo, chanting "Cristiano, quedate", "Cristiano, stay", and soon the whole stadium was singing too.

When Ronaldo resumed, the big screen briefly catching a stoney-faced Gareth Bale next to a beaming Casemiro, he said: "Thank you, this is very important to me. I am so happy with your passion, the passion of the players and coaches.

"What I like most is winning. So for one last time, one, two three - Hala Madrid!"

Earlier, in the Plaza de Cibeles, he had signed off a more modest speech with: "Thank you guys and see you next year."

At euphoric events like these, there must always be a pull to draw the biggest cheer, but Ronaldo's behaviour at least suggests Real could satisfy the 33-year-old if they want to.

He reportedly seeks a new deal in line with Lionel Messi's at Barcelona and Neymar's at PSG.

But Perez was not impressed by Ronaldo's posturing on Saturday. "We hear the same every summer," Perez said. "And then nothing happens."

In 2012, Ronaldo said he was "sad" and last year, Portugese newspaper A Bola claimed the forward wanted to leave, unhappy with the club not backing him in the face of tax investigators.

Perez and Ronaldo need each other, but neither will want to be seen to have lost the argument. At the very least, Real's celebrations showed nothing has been decided yet.

Comments
Topics mentioned in this article
Real Madrid Liverpool Cristiano Ronaldo Football
Get the latest updates on ICC T20 Worldcup 2022 and CWG 2022 check out the Schedule, Live Score and Medals Tally. Like us on Facebook or follow us on Twitter for more sports updates. You can also download the NDTV Cricket app for Android or iOS.