Chelsea's lacklustre FA Cup fifth round exit was another painful blow for Maurizio Sarri, who is facing a fight to save his job following a dismal debut season. 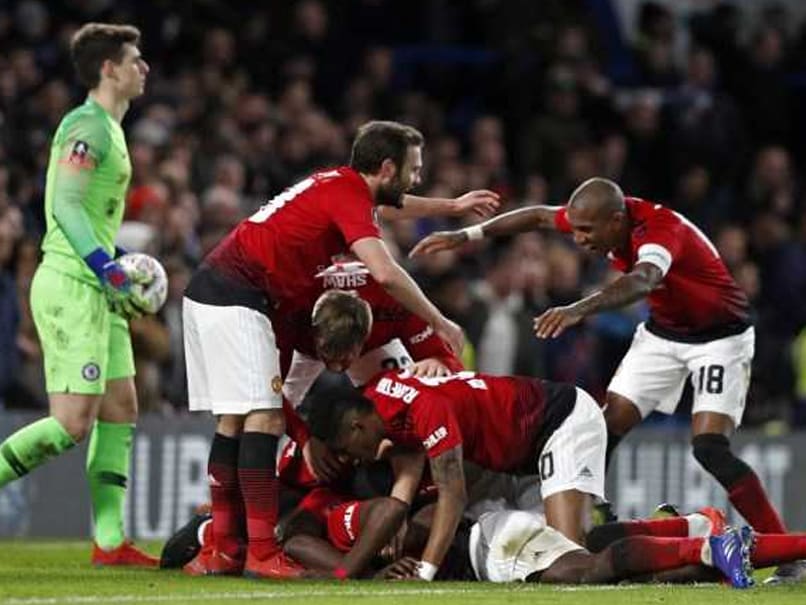 Paul Pogba drove Manchester United into the FA Cup quarter-finals and pushed Chelsea manager Maurizio Sarri closer to the sack as the troubled holders crashed to a 0-2 defeat on Monday. Pogba set up United's opening goal for Ander Herrera with a majestic cross and the France star added the second himself as Ole Gunnar Solskjaer's side produced a commanding display at Stamford Bridge. Chelsea's lacklustre fifth round exit -- their first FA Cup defeat since the 2017 final -- was another painful blow for Sarri, who is facing a fight to save his job following a dismal debut season.

Chelsea suffered their heaviest defeat for 28 years when they were thrashed 6-0 at Manchester City earlier this month, an indignity that came just weeks after a humiliating 0-4 loss at Bournemouth.

Amid claims Sarri has lost the support of his players, the former Napoli boss watched ashen-faced as Chelsea collapsed again for a fifth defeat in their last 10 games.

Sarri was subjected to chants of "you don't know what you're doing" and "you're getting sacked in the morning" from frustrated Chelsea fans, who called for their former star Frank Lampard, now in charge of Derby, to replace the Italian.

It was the worst possible start to a defining period for Sarri, whose stubborn tactics and dubious man-management have come under intense scrutiny.

Chelsea, currently outside the Premier League's top four, return to action against Malmo in the Europa League last 32 second leg holding a 2-1 lead on Thursday.

Assuming he hasn't been axed by demanding Chelsea owner Roman Abramovich before then, a shock defeat against Malmo would be catastrophic for Sarri ahead of next Sunday's League Cup Final date with Manchester City.

United are through to the last eight for a fifth consecutive season as they look to win the FA Cup for a record-equalling 13th time and first since 2016.

Ending United's nine-game winless run at Chelsea was another feather in Solskjaer's cap as his team bounced back from last week's Champions League last 16 first leg loss to Paris Saint-Germain.

Solskjaer went unbeaten in his first 11 games and the interim boss showed his tactical skills by out-witting Sarri with his switch to a midfield diamond formation.

In a frantic opening, Romero was called into action when David Luiz drilled a dipping free-kick over the United wall.

Romero kept out Luiz's effort and scrambled to his feet to save Pedro's powerful shot from the rebound.

Gonzalo Higuain should have opened the scoring from Cesar Azpilicueta's teasing cross, but the Argentine striker headed wide.

Those misses proved fatal for Chelsea, whose early pressure was rendered irrelevant by another lapse of concentration in the 31st minute.

Mata picked out Pogba on the left wing and the United midfielder, unchecked by the slow-to-react Antonio Rudiger, unfurled a sublime cross that looped towards the far post.

Herrera timed his run perfectly to meet Pogba's delivery in stride and Marcos Alonso fatally lost his man as the Spanish midfielder planted a close-range header past Kepa Arrizabalaga for his first goal since December.

Pogba was only just getting warmed up and he single-handedly ripped Chelsea part to double United's lead on the stroke of half-time.

Playing an incisive pass down the right flank to Rashford, Pogba surged into the Chelsea area and muscled his way above Azpilicueta to meet his team-mate's pin-point cross with a diving header that Kepa couldn't keep out.

It was the 15th goal Pogba has been directly involved since Solskjaer took charge, underlined his renaissance since the sacking of his nemesis Jose Mourinho.

Even Eden Hazard, marked out of the game for long periods, couldn't rescue the beleaguered Sarri as he found a sliver of space, only to see his shot deflected over by Victor Lindelof as Chelsea succumbed tamely.

Paul Pogba Ander Herrera Football
Get the latest updates on ICC T20 Worldcup 2022, check out the Schedule and Live Score. Like us on Facebook or follow us on Twitter for more sports updates. You can also download the NDTV Cricket app for Android or iOS.