Should Real Madrid suffer a humiliating group stage exit, ending their remarkable run as the only team to ever avoid elimination at this phase, coach Zinedine Zidane's future will be at risk. 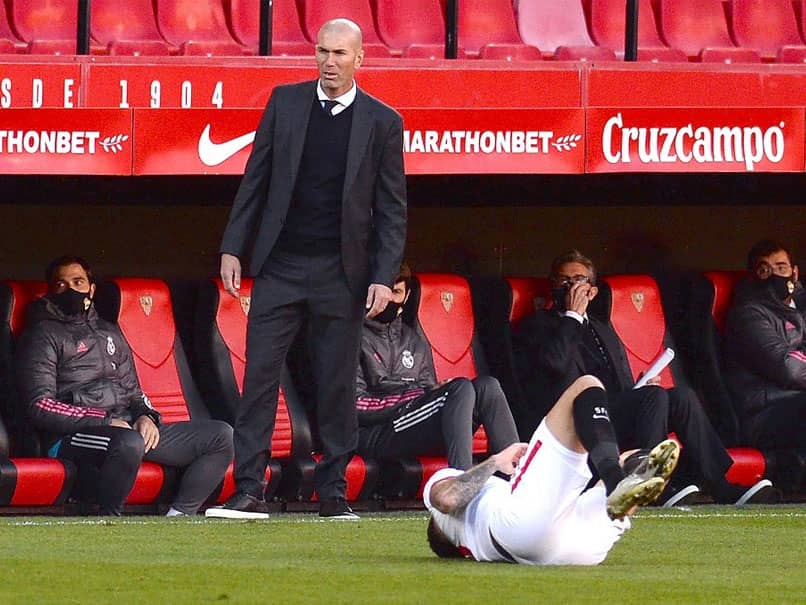 Zinedine Zidane is under huge pressure with Real Madrid's qualification hopes hanging by a thread.© AFP

Real Madrid value success in the Champions League above all else, but the 13-time champions head into Wednesday's game against Borussia Moenchengladbach with their qualification hopes hanging by a thread. Should they suffer a humiliating group stage exit, ending their remarkable run as the only team to ever avoid elimination at this phase, coach Zinedine Zidane's future will be at risk. A win for either side in the Spanish capital will guarantee them passage through to the last 16 from Group B. If Madrid draw and Shakhtar win or draw with Inter Milan in the other group match, the Spanish giants will be out.

Reports in the Spanish capital have linked Madrid with former Tottenham coach Mauricio Pochettino, currently without a club, should they part ways with Zidane, while Real Madrid Castilla coach Raul Gonzalez, a prolific striker for the club in the past, has been touted as a 'plan B'.

The Frenchman's predecessor Santiago Solari was sacked after the humiliating last-16 exit against Ajax in the Champions League in 2019, paving the way for him to return just 10 months after his sudden departure.

Last season's elimination at the same phase by Manchester City was mitigated by the team's strong domestic performance, as they ground their way to the Spanish title, but another early failure in Europe may prove to be the final straw for trigger-happy president Florentino Perez.

"Zizou is a magnificent coach, a good friend and will do everything possible to have Madrid in the best position possible,” said former Madrid goalkeeper Iker Casillas, defending the coach against the mounting speculation over his future.

"You cannot live in the past, but he has earned the right to lead Madrid."

However, despite his success during two stints in charge, winning three Champions League trophies, two La Liga titles and two Club World Cups among other silverware, and his fine history as a player, a defeat could make Zidane Madrid's eighth managerial casualty in 10 years.

He is at least boosted by the return of captain Sergio Ramos and right back Dani Carvajal. The Spanish duo are important parts of Madrid's defence.

Ramos in particular is essential, with Madrid having lost eight of their last 10 European games in which the 35-year-old has not played, including the Ajax and Manchester City eliminations.

Zidane got a boost after a narrow 1-0 victory over Sevilla on Saturday, Real's first Liga win since October.

"The last few days have been very tough but this team has a lot of character and loves challenges,” Zidane said.

"Today's win is very important for what is coming next. We know when we don't play well we will be criticised but we have to focus on the positives and keep trying to find consistency."

Madrid almost fell to defeat in Germany in October but last-gasp goals from Karim Benzema and Casemiro helped them earn a 2-2 draw after Marcus Thuram's double put Gladbach ahead.

A pair of wins against Antonio Conte's underwhelming Inter Milan got Madrid back on track but a dismal 2-0 away defeat by Shakhtar Donetsk at the start of December left Zidane desperately needing a victory this week.

Madrid then host league leaders Atletico Madrid in a derby clash on Saturday, another crucial match in a week which could define the Spanish champions' season, and their coach's future.

After the Shakhtar defeat Zidane insisted he had no intention of resigning, but if the team stumble against Marco Rose's Gladbach, that decision may be taken out of his hands.

Shakhtar Donetsk Zinedine Zidane Football
Get the latest updates on IPL 2021, IPL Points Table , IPL Schedule 2021 , live score . Like us on Facebook or follow us on Twitter for more sports updates. You can also download the NDTV Cricket app for Android or iOS.