Tottenham Hotspur have lost both of their group matches after a 1-2 defeat at Inter Milan in their Champions League opener. 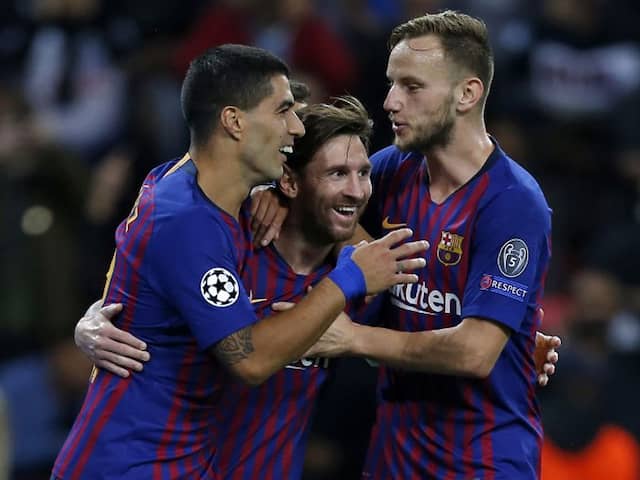 Lionel Messi's Wembley masterclass and a sublime strike from Ivan Rakitic got Barcelona back in the groove as they clinched a pulsating 4-2 victory against Tottenham Hotspur on Wednesday. Ernesto Valverde's side arrived in London for the Champions League Group B tie amid a mini-crisis after failing to win their last three La Liga games. But the Spanish champions have fond memories of the English national stadium, where they won the European Cup in 1992 and 2011, and they were revitalised by the sight of the iconic venue.

Aided by a rush of blood from Tottenham goalkeeper Hugo Lloris, Barcelona went ahead after only 92 seconds as Philippe Coutinho scored their quickest Champions League goal since 2005.

Rakitic stole the spotlight midway through the first half when the Croatia midfielder struck with a thunderous half-volley.

In a dramatic second half, Tottenham's Harry Kane reduced the deficit before the majestic Messi added Barcelona's third.

Erik Lamela's deflected strike kept Tottenham in the hunt, but Messi capped a mesmerising performance in the final moments to give Barca a second successive group-stage victory as they emerged from their recent struggles.

Tottenham are in danger of crashing out at the group stage for the second time in three years.

Mauricio Pochettino's side have lost both of their group matches after a 2-1 defeat at Inter Milan in their opener.

They head to PSV Eindhoven for their next European fixture on October 24 knowing a win is essential as they already trail Barca and Inter by six points.

It took Messi less than two minutes to show reports of Barca's demise were greatly exaggerated.

Taking possession on the halfway line, Messi was pressured by Son Heung-Min, but his devastating response was simply sublime.

Messi twisted away from Son as if swatting away an annoying fly, then unfurled a perfectly-weighted pass that picked out Jordi Alba's run behind Tottenham defender Kieran Trippier.

Alba alertly picked out Coutinho on the edge on the penalty area and, with Lloris having needlessly rushed off his line, the former Liverpool forward was able to fire into the empty net.

It was a bad mistake by Lloris in the French World Cup winner's first appearance since August after a torrid period marred by a thigh injury and his arrest for drink-driving.

Tottenham were decimated by injuries to Christian Eriksen, Dele Alli and Mousa Dembele and it took 25 minutes before they finally had a shot when Kane brought a routine save from Marc-Andre ter Stegen.

That was only a brief respite for Tottenham as Valverde's team doubled their lead in the 28th minute.

Once again the creation and execution were breath-taking.

Messi clipped a pass to Luis Suarez before Coutinho smartly hooked the ball back from the touchline to the edge of the area, where Rakitic launched himself into the air for an agile half-volley that flashed past Lloris.

Messi was toying with Tottenham and it seemed only a matter of how many Barcelona would win by when he glided away for a shot that struck a post early in the second half.

Spellbound by Messi's magic, Tottenham backed off again moments later as the striker hit the woodwork for a second time.

Yet Kane gave Tottenham a lifeline when the England forward netted against the run of play in the 52nd minute.

Powering into the Barca area with intent, Kane side-stepped Nelson Semedo and planted a powerful low strike into the far corner for his 10th goal in 12 Champions League appearances.

Messi had the perfect response in the 56th minute when he cantered onto Alba's pass and side-footed past Lloris.

Tottenham refused to surrender and Lamela set up a tense finale when his 66th minute shot deflected off Clement Lenglet and flew past ter Stegen.

But Messi had the last word when he slotted home from Alba's cross to ease Barca's nerves in the 90th minute.

Hugo Lloris Philippe Coutinho Tottenham Hotspur vs Barcelona, B Football
Get the latest Cricket news, check out the India cricket schedule, Cricket live score . Like us on Facebook or follow us on Twitter for more sports updates. You can also download the NDTV Cricket app for Android or iOS.