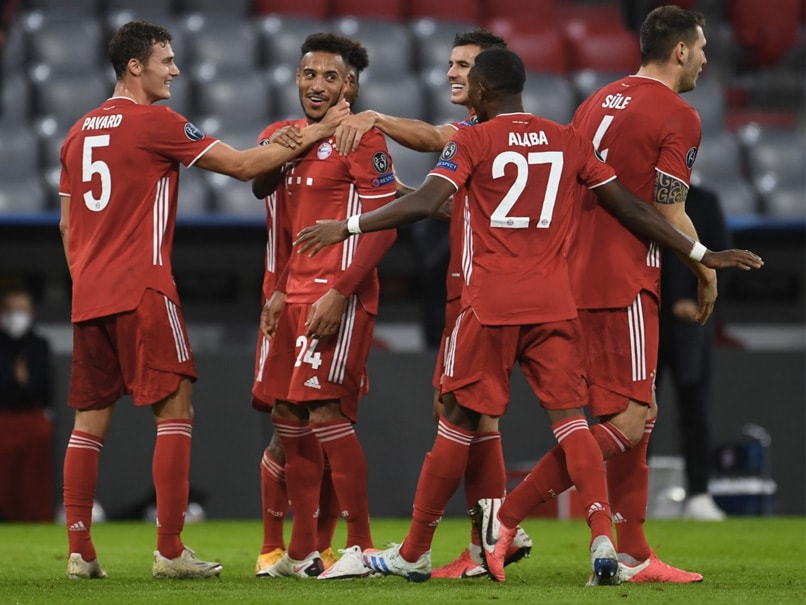 Bayern Munichwinger Kingsley Coman picked up where he left off last season with two goals in a 4-0 home rout of Atletico Madrid on Wednesday as the holders got the defence of their Champions League campaign off to a winning start. Coman, whose header settled last season's Champions Leaguefinal against Paris Saint-Germain just 59 days ago in Lisbon, scored Bayern's opening goal, created their second and claimed their fourth behind closed doors at the Allianz Arena.

"We played very well, I am very happy with my two goals," Coman told Sky Sports.

"The winning goal in last season's final is a good motivator, but it's in the past now and we have fresh goals this season."

Coman saved his best for last with a superb effort, turning the Atletico defence inside out before firing home on 72 minutes.

Goals by midfielders Leon Goretzka and Corentin Tolisso, who produced an unstoppable long-range strike from outside the box, added to Atletico's misery in Munich.

The defeat was the joint heaviest Atletico has suffered under Diego Simeone, rivalling the 4-0 drubbing dished out at Dortmund almost exactly two years ago.

"I am very pleased with the win, especially in defence, and we were rewarded for our hard work," said head coach Hansi Flick after Bayern's 12th straight win in Europe dating back to their 2018/19 last 16 defeat to Liverpool.

There were nervous moments in the build-up before UEFA confirmed the game could go ahead after Bayern winger Serge Gnabry tested positive for Covid-19 on Tuesday.

The rest of the Munich squad tested negative in Wednesday morning's round of testing, but Goretzka later admitted Gnabry's positive test was a "shock".

Both sides had clear early chances as Luis Suarez just failed to connect with a low cross from Atletico left back Renan Lodi, while at the other end Bayern centre-back Niklas Suele hit the post.

Joshua Kimmich, who celebrated the birth of his second child the night before, won the ball, then turned and put a superb pass into the box which found Coman who fired past Atletico goalkeeper Jan Oblak on 29 minutes.

Coman then turned provider when the France winger darted into the area, spotted Goretzka free and the central midfielder beat Oblak to make it 2-0 at the break.

Atletico appeared to have pulled a goal back early in the second half when Joao Felix tapped home, but the VAR spotted Suarez offside in the build up.

Tolisso grabbed Bayern's third just after the hour mark when he blasted home a thunderous strike after Kimmich's effort had been charged down.

Coman capped a fine individual display when he twisted and turned his way past marker Felipe before deftly firing home on 77 minutes.

The 24-year-old was almost immediately substituted after helping establish a four-goal cushion with back-to-back away group games at Moscow and Salzburg in the coming weeks.

Atletico Madrid Kingsley Coman Football
Get the latest updates on ICC T20 Worldcup 2022, check out the Schedule and Live Score. Like us on Facebook or follow us on Twitter for more sports updates. You can also download the NDTV Cricket app for Android or iOS.