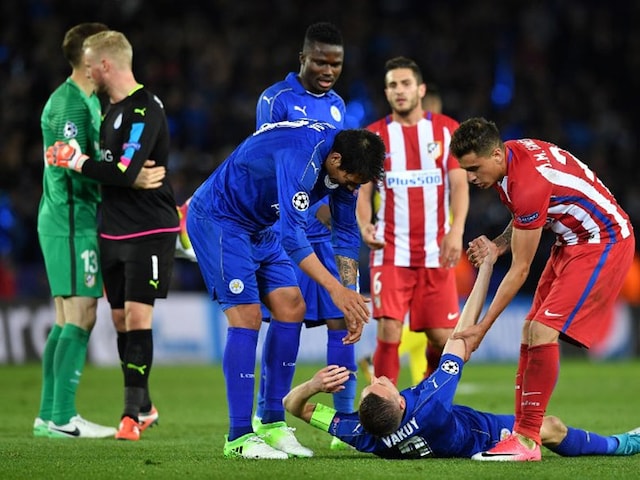 Jamie Vardy scored in vain as Leicester City's Champions League fairytale came to a valiant end following a 1-1 quarter-final draw at home to Atletico Madrid on Tuesday. Seeking to overturn a 1-0 first-leg deficit, Leicester fell further behind to Saul Niguez's first-half header, before Vardy's 61st-minute strike gave them hope. But despite heavy Leicester pressure and furious noise inside the King Power Stadium, Atletico completed a 2-1 aggregate win to reach the semi-finals for the third time in four seasons.

"We had them rattled with the effort and commitment we showed. It's no discredit to lose to a team of that calibre," Leicester manager Craig Shakespeare told BT Sport.

Leicester had hoped to become the competition's first debutant semi-finalists since Villarreal in 2006, but they were unable to engineer a repeat of their last-16 triumph against Sevilla.

Having successfully staved off the threat of relegation under new manager Shakespeare, the rest of their season now holds nothing more than a return to pre-title normality.

It is the third time Atletico have eliminated Leicester from continental competition, after previous triumphs in the 1961-62 European Cup Winners' Cup and the 1997-98 UEFA Cup.

Beaten by city foes Real Madrid in the 2014 and 2016 finals, Diego Simeone's side can continue to dream that this will be the year they finally end their wait for European football's biggest prize.

"I'm full of emotion and pride at the performance of my team," said Simeone.

"I also have to say, what a great performance from our opponents. It was almost a pleasure to compete against them."

Leicester's desire to make the most of the occasion was clear from the start, pyrotechnics greeting the players as they came out while fans twirled blue, white and gold foil flags distributed by the club.

But whereas Leicester had quickly taken charge of their second-leg match against Sevilla in the previous round, Atletico made it clear they would not be pushed around.

They defended with their customary tenacity, while two dangerous crosses from Yannick Carrasco -- preferred up front to the fit-again Kevin Gameiro -- demonstrated their threat on the counter.

It was just as Leicester were threatening to make inroads, Shinji Okazaki stabbing wide at the near post from Vardy's cross, that the visitors tightened their grip on the tie.

Filipe Luis was given space to shape a cross into the box from the left and the unmarked Saul expertly guided a header past Kasper Schmeichel's outstretched right hand.

Riyad Mahrez volleyed straight at Jan Oblak at the other end after Marc Albrighton's cross was headed away, but it was the voices of the away fans that rang loudest as the half-time whistle sounded.

The second half brought with it drastic changes for the hosts, with Ben Chilwell and Leonardo Ulloa replacing Yohan Benalouane and Okazaki as Shakespeare switched to a bold 3-4-3 system.

Antoine Griezmann gave them a scare with an early dart into the box, but Atletico soon found themselves on the back foot.

After left wing-back Chilwell thrashed over, Leicester levelled, Vardy slamming in from inside the six-yard box after Chilwell's shot had been charged down by Stefan Savic.

The final half-hour was virtually one-way traffic, but Atletico repelled everything Leicester threw at them.

Ulloa and Vardy both had shots blocked, while Vardy's flick was caught by Oblak and Mahrez whipped a free-kick narrowly over the bar.

Leicester captain Wes Morgan, passed fit to play after six games out with a back problem, succumbed to injury late on, symbolically hobbling off as Leicester's European dream faded away.

Comments
Topics mentioned in this article
Atletico Madrid Leicester City Jamie Vardy Football
Get the latest Cricket news, check out the India cricket schedule, Cricket live score . Like us on Facebook or follow us on Twitter for more sports updates. You can also download the NDTV Cricket app for Android or iOS.