Thomas Mueller, 31, converted an early penalty to put the visitors on the way to a success which saw him match the tally of legendary goalkeeper Oliver Kahn on 260 league wins. 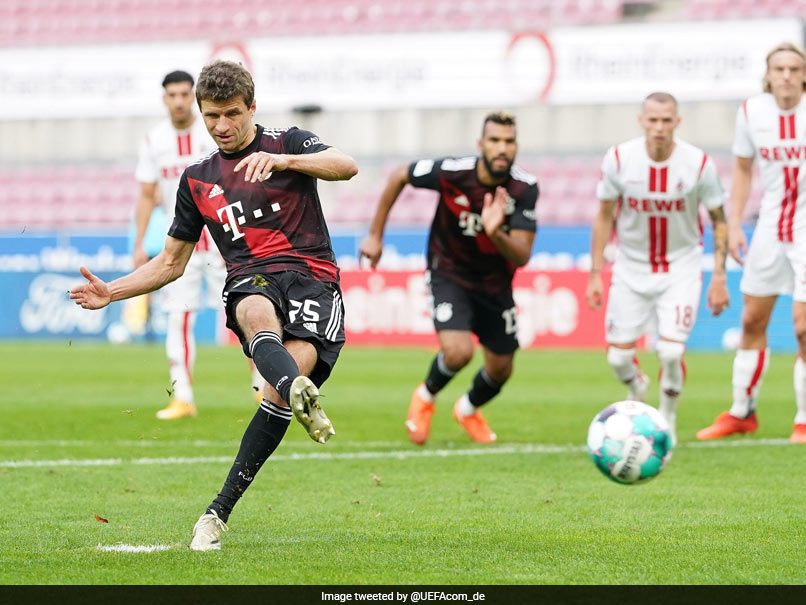 European champions Bayern Munich went top of the Bundesliga on Saturday as Thomas Mueller equalled Oliver Kahn's record for most league wins in the famous shirt in Saturday's 2-1 victory at Cologne. Mueller, 31, converted an early penalty to put the visitors on the way to a success which saw him match the tally of legendary goalkeeper Kahn on 260 league wins. Robert Lewandowski, who scored 10 goals in the opening five league games, was rested ahead of Bayern's midweek Champions League match at Salzburg and the Bundesliga showdown at second-placed Dortmund next Saturday.

"(We were) too nonchalant up front, even though the passion was there," said Mueller despite the reigning champions' victory.

Serge Gnabry, who scored Bayern's second goal, admitted: "We let the opponent back into the game, it wasn't our best performance."

However, RB Leipzig, who are now two points behind in third, can go back to the top of the table if they beat Borussia Moenchengladbach later on Saturday.

An early header by Gnabry led to Cologne defender Marius Wolf giving away the 13th-minute penalty which Mueller scored.

Gnabry added the second on the stroke of half-time when he rolled the ball into the net to finish a counter-attack.

However, Cologne improved in the second half and substitute midfielder Dominick Drexler pulled back a late goal.

Dortmund climbed to second, despite resting striker Erling Braut Haaland, as defender Mats Hummels scored both goals in a 2-0 win at Arminia Bielefeld.

Hummels picked up a late thigh injury while making a tackle.

However, Dortmund forward Julian Brandt backed Hummels to be fit for their Champions League match at Club Brugge on Wednesday, saying: "He'll make it -- he heals quick."

Dortmund took the lead when England winger Jadon Sancho curled in a corner which bounced off Hummels and rolled over the line on 53 minutes.

Hummels grabbed his second with a header from a Marco Reus cross 19 minutes from time.

Augsburg climbed to fourth as winger Andre Hahn scored two late goals in a 3-1 home win against bottom side Mainz.

Werder Bremen coach Florian Kohfeldt picked up a point on his third anniversary in the job with a 1-1 draw at Eintracht Frankfurt.

US striker Josh Sargent swept his shot home early in the second half to give Bremen the lead.

However, the Portugal international made amends when he buried Kamada's cross into the Bremen net for the equaliser on 65 minutes.

Schalke, second from bottom, have gone 22 league games without a win after being held to a 1-1 draw at home to Stuttgart on Friday.

A first-half header by Schalke's teenage defender Malick Thiaw was cancelled out by a leveller from Argentinian forward Nicolas Gonzalez for the visitors.

Schalke are edging towards the unwanted record of Tasmania Berlin, who now play in Germany's fifth tier, who went 31 Bundesliga matches without victory in 1965/66.

Thomas Muller Serge Gnabry Football
Get the latest updates on ICC Women's Cricket World Cup 2022 and IPL 2022, check out the Schedule , Live Score and IPL Points Table. Like us on Facebook or follow us on Twitter for more sports updates. You can also download the NDTV Cricket app for Android or iOS.