Having managed a record 21 assists in the Bundesliga last season, Thomas Mueller has continued his sparkling form by scoring five goals and creating four more so far in 2020/21. 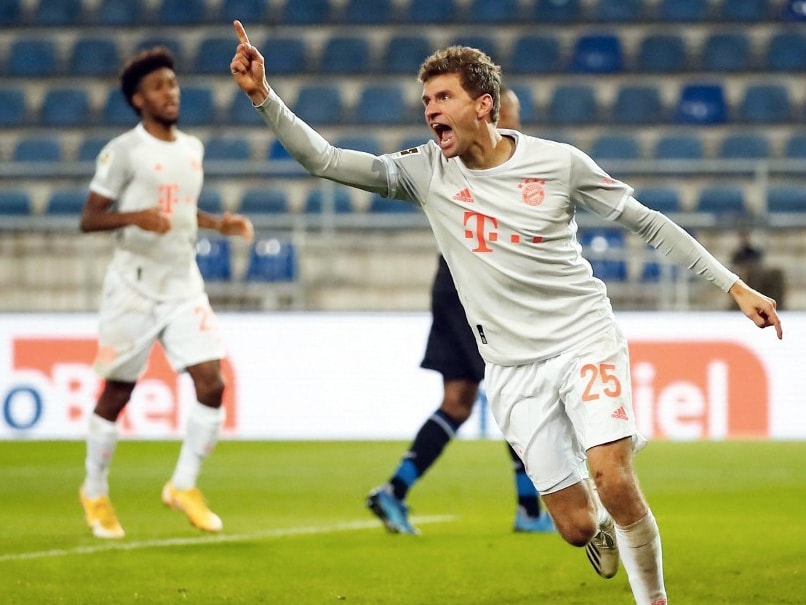 Thomas Mueller can further fuel appeals for him to be recalled by Germany when Bayern Munich launch their Champions League defence at home to Atletico Madrid on Wednesday behind closed doors. Having managed a record 21 assists in the Bundesliga last season, Mueller has continued his sparkling form by scoring five goals and creating four more so far in 2020/21. The 31-year-old netted twice in a 4-1 win at Arminia Bielefeld last Saturday when Robert Lewandowski also grabbed two goals for Bayern. His latest eye-catching club performance has prompted fresh hopes of a Germany recall for Mueller, who was dropped by Joachim Loew from the national set-up in 2019 alongside Jerome Boateng and Mats Hummels.

Now Bastian Schweinsteiger has joined fellow former Bayern and Germany players Didi Hamann and Lothar Matthaeus in calling for Mueller to be reinstated.

"If I was national coach, Mueller as well as Boateng would be in the national side," Schweinsteiger, 36, told Monday's edition of German magazine Kicker.

Schweinsteiger helped win the 2014 World Cup in Brazil alongside Mueller, who knows he still has plenty to offer Germany after 100 internationals and 38 goals for 'die Mannschaft'.

"Everyone can see that I am in good form. Let's just see what happens," Mueller told broadcaster ZDF on Saturday, yet Loew has so far showed no signs of reversing his decision.

Last month, Mueller became the most successful German footballer of all time -- surpassing Schweinsteiger's record of 26 titles -- when Bayern won the German Super Cup as he lifted a trophy for the 27th time in his career.

After an early season plagued by tired legs and defensive wobbles, Bayern will need Mueller's creativity against an Atletico side who have conceded just one goal in four games so far this season.

Bayern, who won their first ever European Cup against Atletico back in 1974, will begin their Champions League defence behind closed doors.

The Bavarians have a perfect record at home against Diego Simeone's side, having twice beaten them in Munich in 2016.

Yet Atletico knocked Bayern out of the semi-finals in 2015/16 and the German side remain wary of their Spanish opponents.

Goalkeeper Manuel Neuer warned that Atletico are a "strong team" who were "uncomfortable" to play against.

"The good thing is that the game is on Wednesday, so we have an extra day to prepare," said the Bayern captain.

After having less than a month between last season's Champions League final and the first Bundesliga weekend, Bayern's relentless schedule has continued apace.

Wednesday's game will be their third in six days, while further Champions League fixtures against Salzburg and Lokomotiv Moscow mean Bayern have midweek and weekend games in each of the next three weeks.

The physical strain and the need to rotate has led to a few early-season hiccups.

Bayern suffered a shock 4-1 defeat to Hoffenheim last month, and needed a late Robert Lewandowski penalty to seak a 4-3 win over Hertha Berlin before the international break.

On Saturday, Flick criticised his team for a poor second half performance, after individual errors led to a goal for Bielefeld and a red card for Bayern's Corentin Tolisso.

They can ill-afford a repeat against Atletico.

Others have also noted Bayern's lapses in concentration at the back, which has seen Neuer let in five goals in four league games so far.

Matthaeus has accused the champions of being "passive" and "vulnerable" at the back this season.

Joshua Kimmich should bring more stability to Bayern's midfield, with the Germany midfielder expected to return after he missed last weekend's game to be with his wife, who is expecting the couple's second child.

"Joshua is very important for us against Atletico. I hope he can play," Flick told Sky.

Thomas Muller Football
Get the latest updates on ICC T20 Worldcup 2022, check out the Schedule and Live Score. Like us on Facebook or follow us on Twitter for more sports updates. You can also download the NDTV Cricket app for Android or iOS.