Robert Lewandowski took his Bundesliga tally to a record 10 goals in the first five games this season with a hat-trick as Bayern Munich thumped Eintracht Frankfurt 5-0. 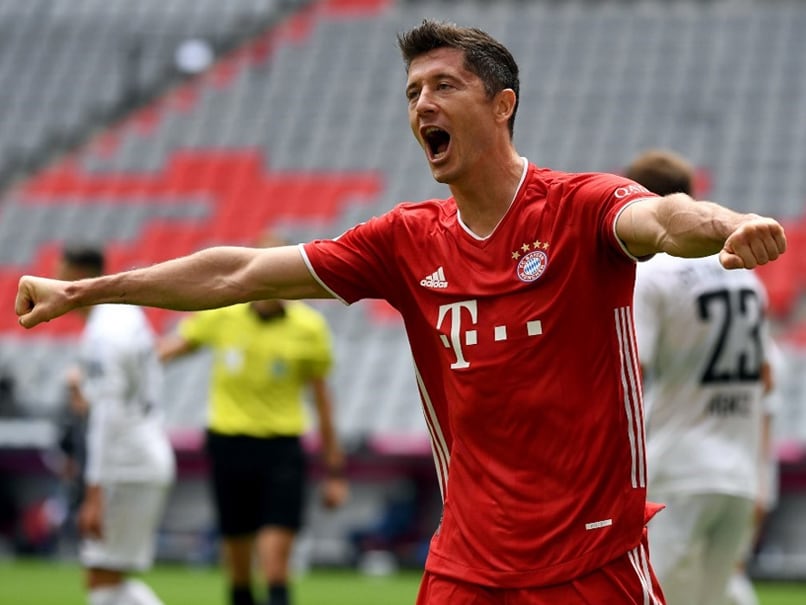 Robert Lewandowskitook his Bundesliga tally to a record 10 goals in the first five games this season with a hat-trick as Bayern Munichthumped Eintracht Frankfurt 5-0 on Saturday, then issued a warning to the European champions' future opponents. "I hope that we will keep this form for a very long time -- it doesn't matter against who we play, we always want to show our best football, we always want to win," Lewandowski told Sky.

Lewandowski has scored nine goals in his last three league games and wrapped up his treble within an hour at the Allianz Arena.

Bayern sit one point behind in second place, level on 12 points with third-placed Dortmund who later saw off Schalke 3-0 at home in the Ruhr derby with goals by Manuel Akanji, Erling Braut Haalandand Mats Hummels.

In Munich, Leroy Sane marked his return from injury with the fourth goal during a brief cameo, before England Under-17 midfielder Jamal Musiala also came off the bench to net the fifth.

However, Bayern's victory came at a price with Canadian left-back Alphonso Davies out for up to eight weeks with torn ankle ligaments.

Lewandowski underlined his status as one of the world's best strikers last season by scoring a career-best 55 goals in 47 games, including 34 in the Bundesliga.

The Polish international opened the scoring on 10 minutes when he fired home, then beat Frankfurt goalkeeper Kevin Trapp with a powerful header in the 26th minute.

Bayern had a penalty appeal turned down when Douglas Costa's cross clipped the hand of Frankfurt's Makoto Hasebe.

Lewandowski wrapped up his hat-trick on the hour mark with a clinical finish from another Costa cross.

Sane then came on to ghost past a defender and drive his shot into the bottom corner with 18 minutes left before Musiala grabbed the final goal as Frankfurt suffered their first league defeat of the season.

Later, Haaland, 20, netted his 23rd goal in 26 games since his January transfer to Dortmund as they extended Schalke's miserable record to 21 Bundesliga games without a win.

Dortmund bounced back from their 3-1 Champions League defeat in mid-week at Lazio with an impressive display.

Dortmund centre-back Akanji, back in the side after recovering from the coronavirus, opened the scoring on 55 minutes when he rifled home a rebound.

"I'm fully fit and it's nice to score after a few unpleasant days at home in quarantine," Akanji later told Sky.

Haaland put the result beyond doubt with a superb chip over Schalke goalkeeper Frederik Ronnow on 61 minutes after staying on his feet despite a defender's lunging challenge.

Hummels struck with a powerful header from a corner 12 minutes from time.

Earlier, Leipzig came from behind in a 2-1 win over Hertha, whose Colombian striker Jhon Cordoba scored in the eighth minute.

Berlin were reduced to 10 men after the break when substitute Deyovaisio Zeefuik was shown two yellow cards within four minutes of coming on.

Leipzig made the man advantage count when Marcel Sabitzer converted a penalty with 13 minutes left.

Hertha were lucky not to finish with nine men when another sub, Jessic Ngankam, scythed down Leipzig left-back Angelino and the referee changed his decision to a yellow card having initially shown a red.

Borussia Moenchengladbach warmed up for Tuesday's Champions League game at home to Real Madrid with a 3-2 comeback win at Mainz.

Germany midfielder Lars Stindl gave Gladbach an early lead, but the visitors were 2-1 down at half-time after French striker Jean-Philippe Mateta scored twice for Mainz.

Gladbach midfielder Jonas Hofmann converted a penalty on 76 minutes before Matthias Ginter headed the winner as Gladbach climbed to fifth.