Bundesliga: Jadon Sancho capped a fine display having also provided the corner from which Manuel Akanji scored in Borussia Dortmund's win over Wolfsburg. 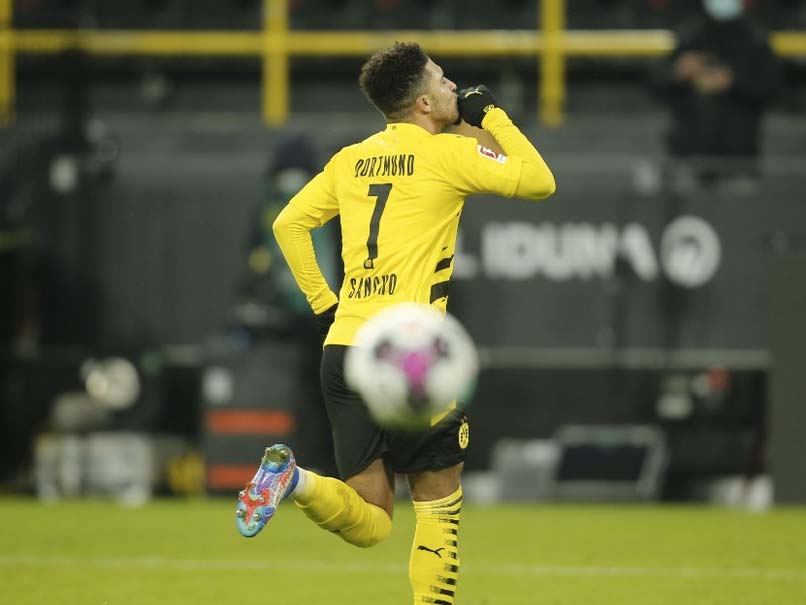 England winger Jadon Sancho scored his first Bundesliga goal this season to seal a 2-0 win for Borussia Dortmund at home against Wolfsburg on Sunday to breathe life back into his side's fading title hopes. After crashing to a shock 2-1 defeat at Union Berlin a fortnight ago before the league's two-week winter hiatus, Dortmund saw off a spirited Wolfsburg side who created plenty of chances for Dutch striker Wout Weghorst. Dortmund finally broke the deadlock at Signal Iduna Park when Manuel Akanji's powerful header hit the net on 66 minutes before Sancho broke clear to score their second in added time.

Having occasionally struggled this season, the 20-year-old Sancho capped a fine display having also provided the corner from which Akanji scored.

"It wasn't an easy win, but we stayed calm and I'm pleased that Sancho put in such a good corner and the ball went in," goal-scorer Akanji told Sky.

Dortmund move up to fourth, six points behind leaders RB Leipzig, who went top of the league table after Saturday's 1-0 win at Stuttgart thanks to Dani Olmo's winning goal.

Having missed the previous seven games, Dortmund striker Erling Braut Haaland returned from a hip injury and although short of match fitness, he went close with several chances before coming off with ten minutes left.

In the goalless first-half, Wolfsburg were unlucky not to be awarded a penalty after the ball struck the hand of Dortmund midfielder Axel Witsel, but the VAR refused to award a spot kick after a lengthy review.

Having been booked on 80 minutes for kicking the ball away in frustration after a missed chance, Haaland was subbed off shortly after.

His replacement Steffen Tigges came within a whisker of claiming Dortmund's second goal when he fired across the Wolfsburg goal.

With Wolfsburg pushing hard for the equaliser, Dortmund counter-attacked from their own goalmouth as Sancho broke clear and fired past Casteels in the 91st minute.

VfL Wolfsburg Jadon Sancho Manuel Akanji Football
Get the latest updates on IPL Auction 2023 and check out  IPL 2023 and Live Cricket Score. Like us on Facebook or follow us on Twitter for more sports updates. You can also download the NDTV Cricket app for Android or iOS.