The debacle is Borussia Dortmund's heaviest home defeat since being humbled 5-1 at home to Bayern Munich in 2009. 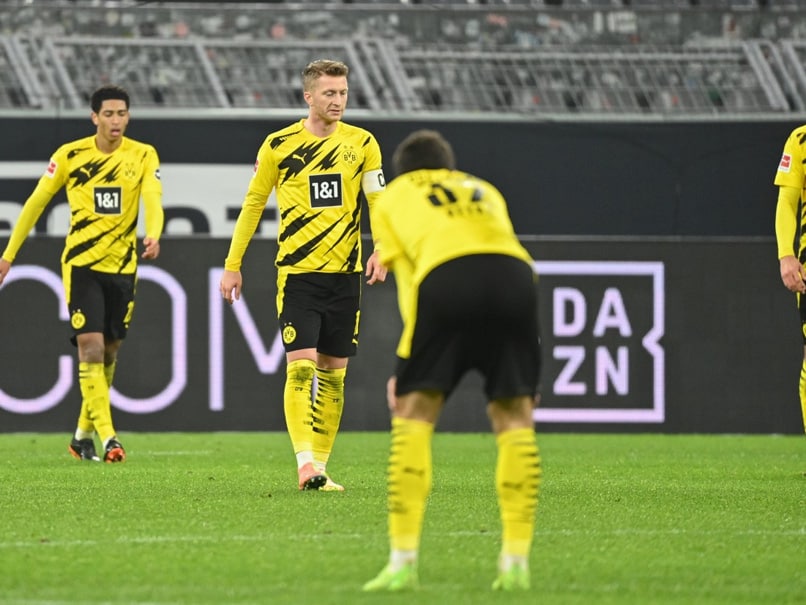 Borussia Dortmund have taken a point in their two league games since Erling Braut Haaland was ruled out.© AFP

Borussia Dortmund coach Lucien Favre admitted his side suffered a "disaster" in the Bundesliga title race on Saturday, after being routed 5-1 by VfB Stuttgart to suffer their heaviest home defeat in over a decade. Stuttgart's Congo winger Silas Wamangituka netted twice in the romp which piled the pressure on Favre, with fifth-placed Dortmund now five points behind leaders RB Leipzig. "Things went mercilessly wrong," admitted Dortmund defender Mats Hummels."We shot ourselves in the foot every few minutes."

Dortmund have taken just a point in their two league games since star striker Erling Braut Haaland was ruled out until January with a hip injury.

"We are not a team that can defend well, that has to be said quite clearly," fumed Dortmund captain Marco Reus, while Favre admitted it was "a disaster".

Wamangituka converted a penalty midway through the first half, after Dortmund's Emre Can brought down Mateo Klimowicz.

It was 1-1 at the break, but the floodgates opened in the second period as nearly every Dortmund mistake was punished with a Stuttgart goal.

Guerreiro lost control of the ball on the edge of his penalty area and Wamangituka claimed his second goal eight minutes after the break.

Midfielder Philip Foerster, in for suspended Stuttgart captain Gonzalo Castro, scored with a perfectly timed run into the area with an hour played.

Jude Belligham's stray pass was then snapped up by Wamangituka and moved to striker Tanguy Coulibaly, who fired home on 63 minutes.

The debacle is Dortmund's heaviest home defeat since being humbled 5-1 at home to Bayern Munich in 2009.

Fresh from knocking Manchester United out of the Champions League in midweek, RB Leipzig saw off Werder Bremen 2-0 to leapfrog Bayern into top spot in the table.

Leipzig captain Marcel Sabitzer converted a penalty and Dani Olmo, who shone in the attacking midfield role, grabbed a first-half goal for the hosts.

The victory left Leipzig a point clear of defending champions Bayern, who can regain first place at FC Union later in Berlin.

The home win capped a good week for Leipzig, who knocked United out of Europe on Tuesday with a 3-2 victory to reach the last 16 of the Champions League.

Guendouzi scored just after the break when Gladbach's Denis Zakaria lost possession on the edge of his area.

Gladbach, who also reached the last 16 of the Champions League in midweek, fought their way back and equalised through Breel Embolo on 70 minutes.

Freiburg ended their nine-match winless run with a 2-0 win over Arminia Bielefeld.

Cologne stay just above the relegation places after their 1-0 win at second-from-bottom Mainz.

VfB Stuttgart Football
Get the latest updates on SA vs IND 2021-22, check out the Schedule and Live Score . Like us on Facebook or follow us on Twitter for more sports updates. You can also download the NDTV Cricket app for Android or iOS.