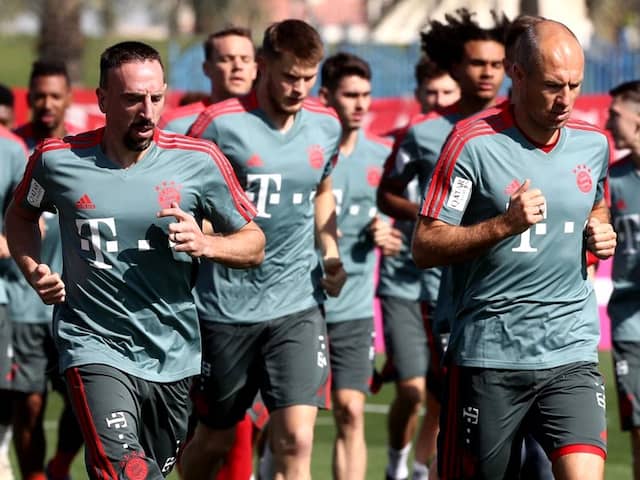 Arjen Robben and Franck Ribery are both expected to leave Bayern Munich at the end of the season.© AFP

Bayern Munich coach Niko Kovac has said that veteran wingers Arjen Robben and Franck Ribery will be on hand to help his side hold their nerve in the last weeks of a tense Bundesliga title race. League leaders Bayern, who host bottom club Hanover on Saturday, currently sit two points ahead of rivals Borussia Dortmund with three games to go. Kovac said on Thursday that the title race would be a "question of nerves", and said that he hoped to be able to count on the experience of club legends Robben, 35, and Ribery, 36.

The long-serving Dutch and French superstars are both expected to leave the club at the end of the season, though there had been fears that injury problems would deny both men a fitting send-off.

Robben has been out of action since November with thigh and calf problems, while Ribery has missed the last two weeks with muscle injuries.

Yet Kovac said that both players were "doing well" and he expects them to play a role in the Bundesliga run-in and German Cup final later this month.

"I am very positive that the two of them will contest these four games alongside us," he said.

"We won't throw everything over board in order to give someone a send-off, but we want to see that they get a few minutes on the pitch."

The departure of Robben and Ribery after 10 and 12 years respectively is just one element of a major generational shift expected at Bayern this summer.

The Munich giants have already completed the signings of young French defenders Benjamin Pavard and Lucas Hernandez, and reports in the German press this week suggested that senior players Mats Hummels and Thomas Mueller are considering a move away.

For now, though, Kovac is focused on crowning his first season in charge with a league and cup double.

"The runner-up is always just the first of the losers, only winning counts," he said.

"I hope that we can wrap up the title before the last day of the season."

Bayern missed the chance to go four points clear of Borussia Dortmund when they were held to a draw at relegation-threatened Nuremberg last Sunday, and Kovac urged his team to bounce back against Hanover.

"The team knows that they missed a big opportunity against Nuremberg, but they are only human," he said.

"We need to be better this weekend."

A win over Hanover would pile the pressure on Dortmund, who face a tough trip to Werder Bremen on Saturday.

Dortmund coach Lucien Favre declared the title race was over after his side's derby defeat to Schalke last weekend, and now faces the next two games without captain Marco Reus, who was suspended for his red-card challenge on Schalke's Suat Serdar.

Favre is expected to play Paco Alcacer and Mario Goetze up front in Reus' absence, as Dortmund look to at least keep within two points of Bayern.

Club CEO Hans-Joachim Watzke rubbished Favre's claim that the title was already lost this week, saying that Dortmund would fight until the bitter end.

"We will do everything we can to try and catch them," Watzke told AFP subsidiary SID on Monday.

"It has been a long time since the league leader has had only a two-point lead with three games to go, and that is good for the Bundesliga."

Elsewhere, both Hanover and Nuremberg could be relegated this weekend if they lose to Bayern and Wolfsburg respectively, and Stuttgart beat Hertha Berlin.

Franck Ribéry Football
Get the latest Cricket news, check out the India cricket schedule, Cricket live score . Like us on Facebook or follow us on Twitter for more sports updates. You can also download the NDTV Cricket app for Android or iOS.