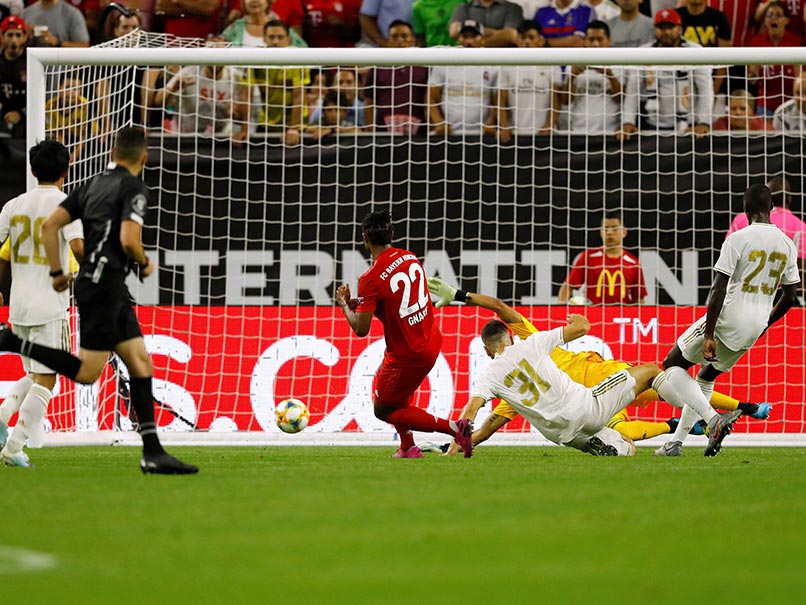 Bayern Munich spoiled Eden Hazard's Real Madrid debut, downing the Spanish giants 3-1 in a friendly in Houston Saturday despite goalkeeper Sven Ulreich's sending off. Corentin Tolisso, Robert Lewandowski and Serge Gnabry had given Bundesliga champions Bayern a comfortable 3-0 lead before recent Real Madrid signing Rodrygo grabbed a consolation goal with a brilliant free kick. That followed Ulreich's departure in the 81st for a foul on Brazilian teen Rodrygo outside the area. Rodrygo, Luka Jovic and Ferland Mendy all made their debuts for rebuilding Real Madrid -- all coming on at halftime as Zinedine Zidane changed his entire side.

Hazard's first outing in a Madrid jersey since his high-priced move from Chelsea had dominated the headlines.

But despite getting a starting nod he made little impact at the NRG Stadium -- home of the NFL's Houston Texans, where the European giants produced plenty of lively end-to-end action from the kickoff.

It needed a stellar display from Bayern goalkeeper Manuel Neuer to keep Real Madrid at bay.

Bayern led at the interval thanks to Tolisso's 15th-minute strike.

Thomas Muller freed Kingsley Coman whose cross made it to Tolisso -- who was denied by Real Madrid keeper Thibaut Courtois on his first attempt but slotted home the rebound.

Down a goal with halftime approaching Real Madrid poured it on.

Karim Benzema let a golden chance go begging in the 43rd, meeting a cross from Isco but knocking his effort wide.

Neuer came up with another impressive save in the 45th, diving to his right to grab Luka Modric's effort from 10 yards out of the air.

Courtois fended off a blast from Coman in first-half injury time to keep Bayern from stretching their advantage before the break.

While Real Madrid applied plenty of pressure, Hazard was circumspect, often opting to pass off to his new teammates.

The closest the 28-year old Belgian came to his first Real Madrid goal was in the 39th minute, when he found space on the left and bent a shot toward the far post only for Neuer to punch it away.

Zidane's wholesale changes at the interval did nothing to further Real Madrid's cause, even though they controlled possession early in the second half.

Lewandowski doubled Bayern's lead in the 67th controlling a high ball from Niklas Sule, turning and firing into the bottom corner.

Two minutes later Madrid gave the ball away deep in their own end and an unmarked Gnabry was able to control the ball and fire past Keylor Navas in goal.

Real Madrid Eden Hazard Football
Get the latest updates on IPL Auction 2023 and check out  IPL 2023 and Live Cricket Score. Like us on Facebook or follow us on Twitter for more sports updates. You can also download the NDTV Cricket app for Android or iOS.