Barcelona and Espanyol were both reduced to 10 men in the second half before Luis Suarez netted the winner for the home side at the Camp Nou. 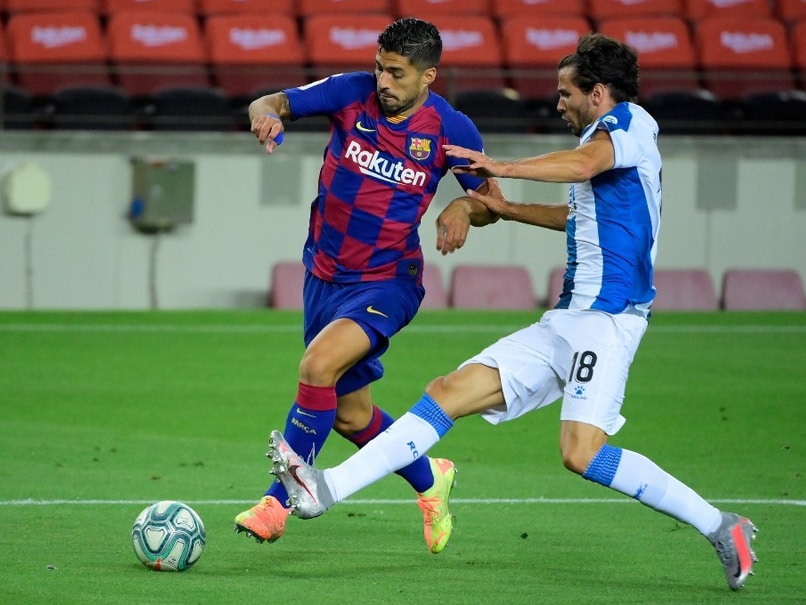 Barcelona kept their faint title hopes alive and doomed Espanyol to relegation on Wednesday as Luis Suarez's goal proved the winner in a pivotal Catalan derby at the top and bottom of La Liga. A cagey contest at Camp Nou exploded into life for six frantic minutes at the start of the second half as Ansu Fati and Pol Lozano were sent off, leaving each side with 10 men before Suarez struck. Suarez profited after another superb contribution from a reinvigorated Antoine Griezmann, his backheel setting up Lionel Messi to shoot, with Suarez turning in the rebound.

This 1-0 victory was a far cry from the sparkling 4-1 win over Villarreal on Sunday but it moves Barca to within a point of Real Madrid, who play their game in hand at home to Alaves on Friday.

Espanyol, rooted to the bottom of the table, will be relegated. They sit 11 points adrift of safety with only three games left to play.

"Life or death" read the front page of Mundo Deportivo on Thursday morning - for Barcelona, who had to win to stay in touch with Madrid, and for Espanyol, given they needed a victory to prolong their survival effort.

Griezmann's combination with Suarez and Messi, coming after his sumptuous chip against Villarreal, sustains the Frenchman's momentum but this was more of a gritty win against an Espanyol team that hit the post at 0-0 and had chances.

"We have to win our next three games," said Suarez. "What Madrid do is up to them. If they drop points, fantastic. We just have to be there if they do."

Espanyol needed to win but have not beaten Barcelona in the league since 2009 when Mauricio Pochettino was in charge and Rufete, the team's fourth coach this season, accepted Messi's commiserations at the final whistle with a look of resignation.

The club's supporters this week expressed anger after a "shameful season" under the Chinese Rastar Group, which took majority control in 2016.

Only Barcelona, Real Madrid and Athletic Bilbao have spent more seasons in the top flight than Espanyol, who after 26 consecutive campaigns there must now rebuild.

"We ask forgiveness from our fans," said Javi Lopez.

"We know these are tough moments for us but for our fans as well. This season nothing has gone right. It's our fault and we are committed to coming back stronger."

Barcelona had a lot of the ball in the first half but did little with it and in fact Espanyol had the better chances on the counter-attack.

Adri Embarba sped away down the right after honing on goal his finish had to be blocked by the outstretched right leg of Marc-Andre ter Stegen.

Ter Stegen was called upon again before half-time and this time Didac Vila raced clear down the left, his shot rebounding off the goalkeeper and Clement Lenglet before falling back to Vila, who hit the far post.

Quique Setien acted at the break, bringing Fati on and shifting Sergi Roberto to right-back but the 17-year-old lasted only five minutes, a high challenge on Fernando Calero earning in him a straight red card on review.

But any advantage Espanyol had was short-lived because Lozano then flew in high on Gerard Pique, with his studs up, and was also sent off to make it 10 against 10.

With the numbers equal but the spaces bigger, Barcelona could attack with greater freedom and they took the lead three minutes later.

A delightful Griezmann backheel teed up Messi to shoot and the ball spilled out for Suarez to tap in.

Messi almost added a second with a thumping volley at the back post while Espanyol wanted a penalty in injury-time when a shot hit the shoulder of Arturo Vidal. The appeals were rightly waved away.

Villarreal had earlier beaten Getafe 3-1 to reduce the gap behind Sevilla in fourth to three points.