Barcelona attempted to re-sign Neymar, sold to PSG for a world record 222 million euros ($249 million) in 2017, but the two teams were unable to agree a deal. 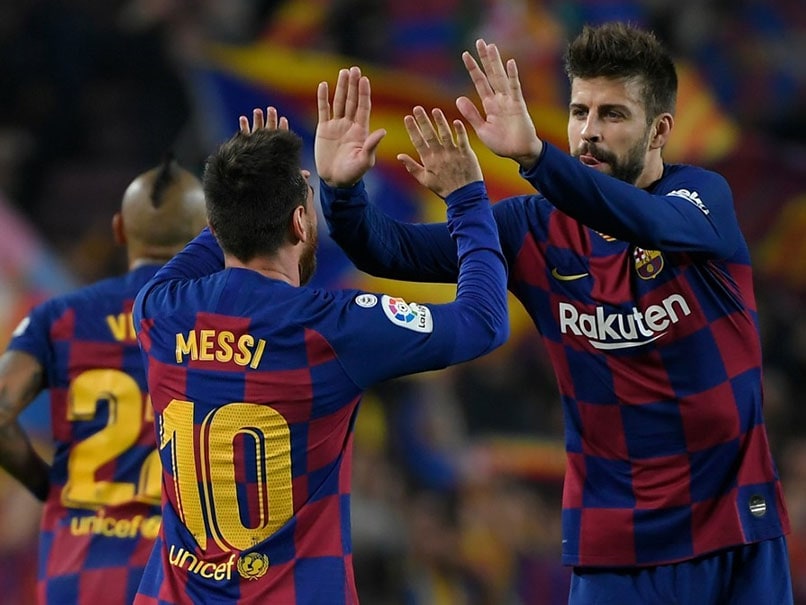 Key Barcelona players, including Lionel Messi, were eager for Neymar to return.© AFP

Gerard Pique has said Barcelona players offered to alter their own contracts to help the club buy Neymar from Paris Saint-Germain last summer. Barca attempted to re-sign Neymar, sold to PSG for a world record 222 million euros ($249 million) in 2017, but the two teams were unable to agree a deal. Key players, including Lionel Messi, were eager for the Brazilian to return and Pique says they tried to help the club's president, Josep Maria Bartomeu, complete the transfer while satisfying UEFA's Financial Fair Play rules.

"What we proposed to the president was that we could tweak our contracts because we knew there was an issue with Fair Play," Pique told Cadena Ser on Wednesday night.

"Instead of getting paid what we were owed for that year, we could transfer it to the second, third of fourth year so Ney could come.

"Ultimately we wanted to support the club and if we could help in some way, we had no problem with that."

Neymar earns 38 million euros a year at PSG and the financial implications of signing the 27-year-old would be huge.

"We told him, 'you live in a golden prison'," Pique added. "But in football anything can happen and the door is open."

Pique also said the postponement of last Saturday's Clasico between Barcelona and Real Madrid was unnecessary.

The fixture has been rescheduled for December 18 after violent protests broke out last week in Catalonia, following the imprisonment of nine pro-independence leaders.

"My opinion is the postponement was unnecessary," said Pique. "Common sense says that in Spanish stadiums there has not been any violence. We are civilised people.

"That same weekend the Espanyol-Villarreal game was played and nothing happened. And why isn't something going to happen on December 18 if it was going to happen before? The situation will be similar.

"It was magnifying a problem that wasn't a problem in the first place."

Pique is also the founder of Kosmos, the investment group leading the revamp of tennis' Davis Cup, which begins in its new format in Madrid on November 18.

The 32-year-old said the plan is for the new one-week competition with 18 teams to expand to two weeks and 24 teams, although Roger Federer has expressed scepticism about the changes.

Asked if he would mind Roger Federer changing football, Pique said: "Not at all."

Pique added: "We sent him a letter and were surprised by his statements. They see the Davis Cup as competing with the tournament he has."