Barcelona have now won seven consecutive matches in all competitions, a run that began by beating Villarreal on September 24, when Lionel Messi returned from injury to make his first start of the season. 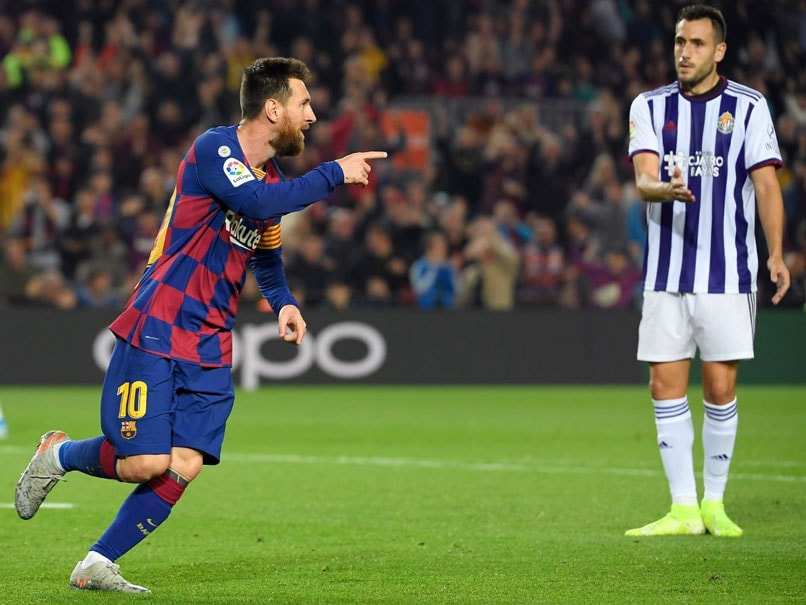 Lionel Messi made it clear he is fit and back to his scintillating best by tearing apart Real Valladolid on Tuesday in a thumping 5-1 victory for Barcelona. Messi scored another spell-binding free-kick at Camp Nou after his sumptuous pass had already teed up Arturo Vidal for Barca's second. He then drove home his second late on before sliding through Luis Suarez to make it five. Yet in truth his two goals and two assists were just the start of it, the defining moments of another mesmeric all-round performance that was dotted with flicks, passes and dribbles, not to mention two humiliating nutmegs.

"I don't know what more I can say," said Barcelona coach Ernesto Valverde.

"There were wonders coming out of his foot," said Valladolid's Michel. "You can only applaud and enjoy it."

Valladolid had threatened to make a game of it when Kiko Olivas benefitted from a rare Marc-Andre ter Stegen error to equalise, after Clement Lenglet had struck in the second minute.

But with Messi in this sort of mood, the result never felt in doubt as victory sent Barcelona back to the top of La Liga, after Atletico Madrid were held to a 1-1 draw by Alaves a couple of hours before.

Valverde's side have now won seven consecutive matches in all competitions, a run that began by beating Villarreal on September 24, when Messi returned from injury to make his first start of the season.

He has needed time, admitting earlier this month he was still short of sharpness even as goals flew in against Sevilla, Eibar and Slavia Prague.

But this display sent a resounding message that Messi is back to his best even if Valverde feels there is more to come.

"He is still getting back to full fitness," Valverde said. "But he is getting better and better."

Valladolid were perhaps unfortunate the 32-year-old was fresh after the postponed Clasico on Saturday meant Barcelona and Real Madrid were given the weekend off.

It meant this was the first game at Camp Nou since violent protests broke out across Catalonia after nine pro-independence leaders were sentenced to imprisonment on October 21.

Giant yellow banners with 'Independencia' and 'Llibertat' written across them were unfurled before kick-off but there was no sign of unrest. Instead, the mood turned celebratory as Messi got to work.

It was his free-kick that Valladolid made a mess of clearing, as Sergi Guardiola lashed the ball against Joaquin Fernandez and Lenglet reacted fastest, his shot deflecting in before two minutes were on the clock.

The procession was briefly halted when Ter Stegen, perhaps unsighted, slapped a cross straight into the shin of Olivas but the remaining 30 minutes of the first half belonged to Messi.

He switched the ball for Frenkie de Jong to slightly overhit a pass for Arturo Vidal and then replicated the Dutchman's effort but did it better, this time picking out Vidal perfectly to score at the back post.

Five minutes later he sent a free-kick curling away from Jordi Masip, who scuttled across his line but could never reach the ball as it nestled in the top right-hand corner.

Messi flicked one through the legs of Oscar Plano, who threw his head back and for a moment stopped dead in frustration. Then it was Guardiola's turn, only this time the nutmeg doubled up as a pass.

After half-time, Ansu Fati, making his last appearance before turning 17, should have tucked away a Messi pass before two goals in the 75th and 77th minutes put Valladolid out of sight.

Messi cushioned Ivan Rakitic's cute pass on his thigh and drove it into the corner and then slid in Suarez, who finished for his eighth goal of the season.

In injury time, Messi should have had his hat-trick but curled wide of the left post when he seemed certain to score. It might have been his first mistake all night.

Atletico Madrid could have done with a drop of Messi's attacking inspiration as they were held to a disappointing draw by Alaves.

Alvaro Morata came off the bench to score his third goal in as many games but Lucas Perez hit a stunning late equaliser at Menizorrotza to ensure a tight contest between two of La Liga's most stubborn defences ended all square.

Atletico sit third, two points behind Barcelona and level with Granada, having played one game more.