Arsenal Through To Europa League Last 32, Everton Out

Jack Wilshere, overlooked by England manager Gareth Southgate earlier in the day, had the best chance for Arsenal but saw a second-half effort cleared off the line. 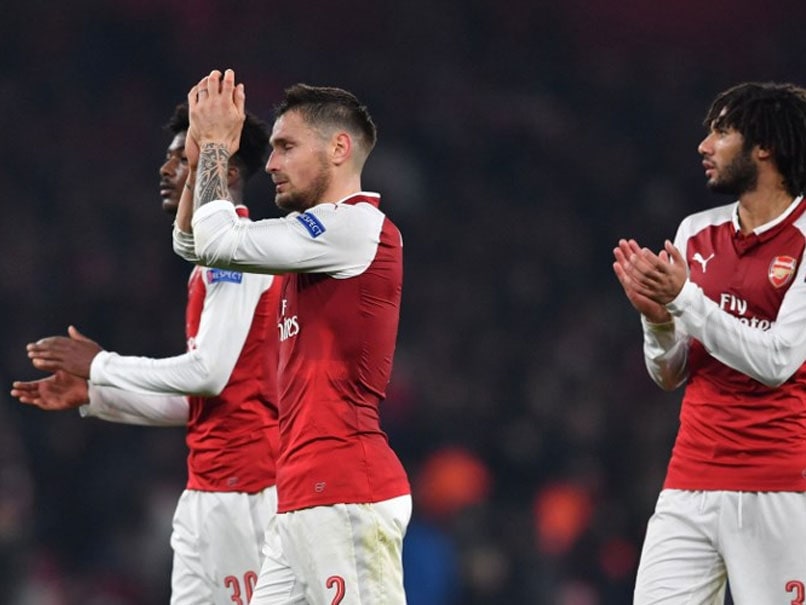 Arsenal stretched their unbeaten home run in all competitions to 16 games.© AFP

Arsenal reached the Europa League last 32 on Thursday as Everton crashed out and Patrice Evra was red-carded for a karate kick at one of his own Marseille fans -- before the match had even started. Arsene Wenger's Arsenal fought out a drab 0-0 draw with Red Star Belgrade at the Emirates but the point was enough to make sure of qualifying for the knockout round with two games to spare in Group H. Jack Wilshere, overlooked by England manager Gareth Southgate earlier in the day, had the best chance but saw a second-half effort cleared off the line.

The result allowed the Gunners to stretch their unbeaten home run in all competitions to 16 games.

"If you can't win the game, don't lose it. We're not delighted with the point, but we'll take it," said Wilshere.

Veteran Marseille defender Evra was sent off after launching a karate-style kick at one of his team's own supporters before the match against Vitoria Guimaraes in Portugal.

Former Manchester United star Evra, 36, was engaged in a heated exchange with a group of fans from an area reserved for around 500 Marseille supporters before aiming a head-high left-footed kick at one of them.

"Pat has experience, and he must not react, it's obvious," said Marseille coach Rudi Garcia whose side lost 0-1 and had Boubacar Kamara sent off three minutes from time.

"Patrice is a more than just an experienced player. You can't respond to insults as bad as they are and as incredible as they might be because they come from one of our supporters.

"He must learn to keep his cool."

The incident immediately brought back memories of another act of kung-fu kick madness by a French footballer.

In January 1995, Eric Cantona, playing for Manchester United, launched a flying kick at a Crystal Palace supporter at Selhurst Park who had jeered him after he had been sent off.

Struggling Everton crashed out after a 3-0 defeat in Lyon.

Languishing in the relegation zone in the Premier League and without a permanent manager since the sacking of Ronald Koeman last week, Everton succumbed to three second-half goals.

Bertrand Traore rounded Jordan Pickford to break the deadlock on 68 minutes in the Group E clash.

Memphis Depay then set up 19-year-old Houssem Aouar to steer in a slick second goal for the hosts on 76 minutes.

The former Manchester United winger completed the scoring himself late on after another ex-United player, Morgan Schneiderlin, was sent off for a second booking.

"We're really disappointed with the result. For nearly 70 minutes, we were nearly perfect with our game plan and created a couple of opportunities and should have scored," said Everton caretaker manager David Unsworth.

Everton also lost defender Cuco Martina to a worrying incident in the first half as the Curacao international was stretchered off in a neck brace following an awkward fall.

Despite suffering a concussion and needing hospital treatment, Martina was later discharged and travelled back to Merseyside.

Seven-time European champions AC Milan, in the midst of a poor run of form in Serie A, failed to relieve much pressure on under-fire manager Vincenzo Montella following a 0-0 draw at AEK Athens.

The Italians hit the post on 57 minutes through Riccardo Montolivo, while Turkey midfielder Hakan Calhanoglu had a powerful drive turned away as Milan remained two points clear of their Greek hosts in Group D.

Vitaliy Buyalskiy fired Dynamo Kiev into the knockout phase after the Ukrainian side secured a 1-0 victory over Group B rivals Young Boys in Switzerland.

Villarreal are on course to advance from Group A after a 2-0 victory at Slavia Prague, but Hoffenheim's qualification hopes in Group C suffered a costly blow as the Germans conceded a stoppage-time equaliser in a 1-1 draw away to Istanbul Basaksehir.

Meanwhile, Lazio downed Nice 1-0 in Group K to remain the only team with a 100 percent record, moving into the last 32 as a result.

Zenit Saint Petersburg and FCSB of Romania are also into the knockout round.

Comments
Topics mentioned in this article
Arsenal Everton Jack Wilshere Patrice Evra Football
Get the latest updates on ICC T20 Worldcup 2022 and CWG 2022 check out the Schedule, Live Score and Medals Tally. Like us on Facebook or follow us on Twitter for more sports updates. You can also download the NDTV Cricket app for Android or iOS.