Tottenham Hotspur are through to the Champions League last 16 from Group H with two games to spare, while Real Madrid will have to wait to join them. 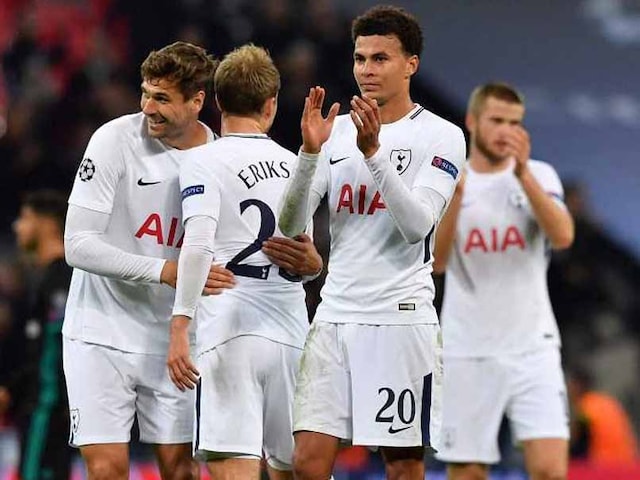 Brilliant Tottenham Hotspur took Real Madrid apart in a 3-1 win over the reigning champions on Wednesday as they clinched their place in the UEFA Champions League last 16 along with Manchester City. Dele Alli starred with a brace for Tottenham with Christian Eriksen also scoring before Cristiano Ronaldo's late consolation. The result ensured that Mauricio Pochettino's side are through from Group H with two games to spare, while Real will have to wait to join them. "We don't want to just compete with these teams -- we want to beat them. I'm happy to get two goals, but more importantly it was a win," Alli told BT Sport.

Tottenham profited from an officiating error to go in front on 27 minutes as Kieran Trippier should have been flagged offside before he crossed for Alli to score.

Alli netted again on 56 minutes when his shot beat Kiko Casilla with the aid of a deflection off Sergio Ramos.

Eriksen made it 3-0 at the end of a counter-attack on 65 minutes, before Real reduced the deficit late on as Ronaldo scored his sixth goal in the competition this season.

This was Real's first group-stage defeat in five years and, following a shock La Liga loss at Girona at the weekend, the pressure is building on coach Zinedine Zidane.

Nevertheless, a win at APOEL later this month will do for the 12-time champions to qualify after the Cypriot side held Borussia Dortmund 1-1 in Germany.

Raphael Guerreiro gave Dortmund a first-half lead but they are still looking for a win in Europe this season after Mickael Pote levelled for APOEL on 51 minutes.

Manchester City continued their sensational form as they saw off Napoli 4-2 in Italy to make it four wins from four in Group F and advance to the knockout phase for the fifth season running.

Lorenzo Insigne put the Serie A leaders in front, but Nicolas Otamendi headed City level and his fellow centre-back John Stones then scored with a header that went in off the underside of the bar.

A Jorginho penalty restored parity again, but Sergio Aguero made it 3-2 and Raheem Sterling completed the scoring.

Aguero's strike allowed him to become City's all-time leading scorer on 178 goals, passing the old mark of 177 set by Eric Brook in the 1930s.

"What he has achieved has made him a legend, he's gone down in history, so I would tell him to enjoy," said City coach Pep Guardiola of Aguero, the former son-in-law of Argentina and Napoli great Diego Maradona.

Shakhtar Donetsk need just a draw in Naples in three weeks to go through too after beating Feyenoord 3-1.

Nicolai Jorgensen headed the Dutch champions into the lead in Kharkiv only for Facundo Ferreyra to equalise.

Marlos, the Brazil-born Ukraine international, then scored twice to secure the victory as Feyenoord are eliminated.

Meanwhile Liverpool moved clear at the top of Group E with a comfortable 3-0 win over Maribor at Anfield.

There would be no repeat of their 7-0 romp in the reverse fixture in Slovenia as the Reds had to wait until the 49th minute for Mohamed Salah to give them the lead.

James Milner then saw his penalty tipped onto the post but he set up Emre Can to double Liverpool's lead before substitute Daniel Sturridge completed the scoring.

Liverpool are a point clear of Sevilla, who beat Spartak Moscow 2-1 in Spain, Clement Lenglet and Ever Banega with their goals before Ze Luis pulled one back.

Earlier, Besiktas missed a chance to secure their place in the last 16 as they drew 1-1 with Monaco in Istanbul, Cenk Tosun's penalty cancelling out the opener from Rony Lopes.

The Turkish champions would have been through with a win but will now hope for a draw at home to second-placed Porto to qualify next time out.

Monaco, semi-finalists last season, are bottom and look unlikely to make it through.

Comments
Topics mentioned in this article
Tottenham Hotspur Real Madrid Dele Alli Christian Eriksen Cristiano Ronaldo Manchester City Football
Get the latest Cricket news, check out the India cricket schedule, Cricket live score . Like us on Facebook or follow us on Twitter for more sports updates. You can also download the NDTV Cricket app for Android or iOS.