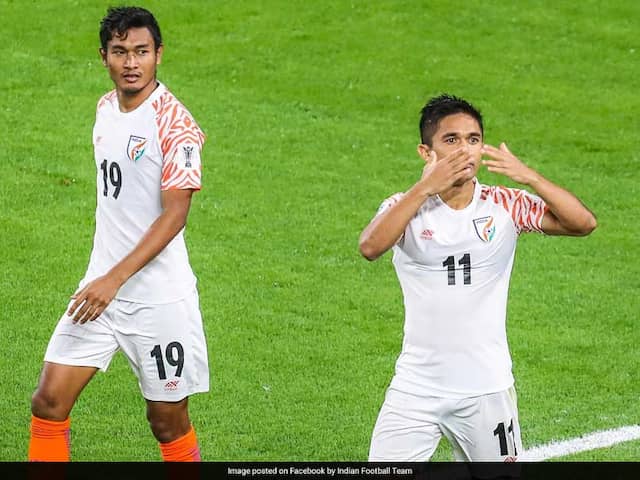 India were handed a reality check against UAE.© Facebook

India were handed a reality check when they lost against hosts United Arab Emirates due to their poor finishing in the previous group stage match of the AFC Asian Cup 2019. However, on Monday, the 97th-ranked India will have a chance to book their maiden knock-out round berth in the continent's showpiece event when they play Bahrain in Sharjah. A draw against the West Asian side, currently ranked 113, will be enough for India to qualify for the round of 16 for the first time in the tournament after failed attempts in 1984 and 2011.

India's talisman Sunil Chhetri will equal former captain Bhaichung Bhutia's record of highest appearances for the country at 107 each on Monday.

India had finished runners-up in the 1964 edition in Israel but that tournament was played in a round-robin format comprising four countries with the winners being decided on the basis of points collected in the league.

There was not a single knock-out match in that edition. But even a defeat on Monday may still see India (3 points from 2 matches) through to the knock-out rounds as one of the four third-placed teams if hosts United Arab Emirates (4 from 2 matches) beat Thailand (3 from 2 matches) in Al Ain in the other Group A match to be played simultaneously.

Four third-placed sides from the six groups of four team each will also advance to the knock-out rounds, along with the top two countries.

Under the competition rules of the Asian Cup, if two teams end their group stage engagements on equal points, the ranking will be decided first on the basis of head to head result.

So, if both Thailand and India lose their matches on Monday, India will end at third as they have defeated the 'War Elephants' 4-1 in their opening match.

But the Stephen Constantine side cannot lose to Bahrain -- to whom India lost 2-5 in the 2011 Asian Cup -- by a big margin as goal difference will get the first preference while deciding which team makes it to the Round of 16 among third place sides of equal points.

India may again deploy a defensive approach and hit on the counter against a physical Bahrain as they need just a draw while it is a must-win for the West Asian side as they are with just one point from two matches after their 0-1 loss to Thailand.

Constantine fielded the same starting eleven in both against Thailand and UAE in a 4-4-2 formation and it will have to be seen whether he does the same against Bahrain.

The central defender duo of Sandesh Jhingan and Anas Edathodika largely marshalled the back-line well so far but there were periods of lack of understanding between them which led to the two goals by UAE.

The head coach is unlikely to make changes at the heart of the defence as well as in the upfront duo of Chhetri and Kuruniyan.

However, Constantine may try out Balwant Singh at some point in time considering the physicality of the Bahrain side.

Historically, India have won just one match against Bahrain in seven matches played so far between the two countries. That win (2-0) had come in an international friendly in Bahrain in October, 1979 with striker Shabir Ali scoring both the goals.

India Sunil Chhetri Jeje Lalpekhlua Gurpreet Singh Football
Get the latest Cricket news, check out the India cricket schedule, Cricket live score . Like us on Facebook or follow us on Twitter for more sports updates. You can also download the NDTV Cricket app for Android or iOS.