Watch: Virat Kohli's Woes Continue, Edges One Outside Off To Get Dismissed By David Willey

Virat Kohli scored 16 runs off 25 balls in the second ODI against England that India lost by 100 runs. 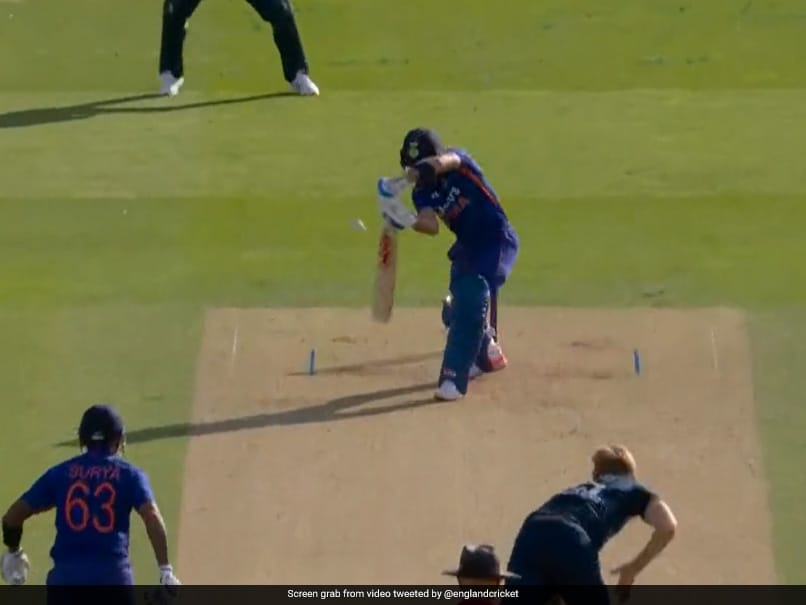 Virat Kohli got dismissed by David Willey in the second ODI against England on Thursday.© Twitter

Virat Kohli's lean patch is showing no signs of ending. In the fifth rescheduled Test against England, he scored 11 and 20 in the two innings. Then in the T20I series, he played two matches and could only score 1 and 11. Then a groin strain saw him missing the first ODI against England. He came back in the second ODI only to fall for 16 to David Willey. After India were reduced to 29/3 by the 11th over, chasing a 247-run target, a lot was expected from the former Indian cricket team captain but he could not deliver yet again.

In the 12th over, bowled by fast bowling allrounder Willey, poked at a length ball that was shaping away and was caught by wicketkeeper Jos Buttler.

This is some spell. Kohli departs...

Earlier, Yuzvendra Chahal's clever variations complemented by Hardik Pandya's steady fast medium bowling saw India bowl out England for 246 in 49 overs. However, it was Moeen Ali (47 off 64 balls) who took the attack back to the opposition camp with his audacious hooked and pulled sixes interspersed with slog sweeps as England's total had some semblance of respectability after the feared top-order promised much but delivered little.

Moeen and Willey (41 off 49 balls) added 62 runs for the seventh wicket to help set up a 250-run target after 200 looked improbable at one point in time.

At the other end, Pandya (6-0-28-2), who is slowly getting his bowling rhythm back, chipped in with wickets of Jason Roy (23) and Liam Livingstone (33) to choke the run-flow as Rohit Sharma had another fine day in office, maneuvering his six-man attack.

Mohammed Shami (10-0-48-1) was regal as usual as he castled rival skipper Jos Buttler (4) with a sharp inswinger that tailed in late. Jasprit Bumrah (10-1-49-2) and Shami were once again in the zone although it wasn't as big a debacle for England compared to the opening game.

Jos Buttler England vs India, 2022 England vs India, 2nd ODI
Get the latest updates on Fifa Worldcup 2022 and check out  Fifa World Cup Schedule, Stats and Live Cricket Score. Like us on Facebook or follow us on Twitter for more sports updates. You can also download the NDTV Cricket app for Android or iOS.