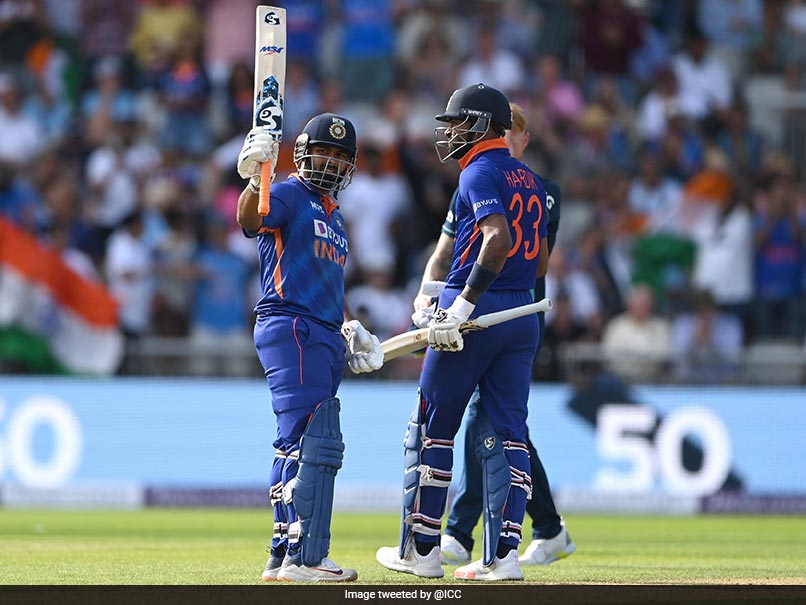 Rishabh Pant's maiden ODI century and Hardik Pandya's all-round heroics fired India to an emphatic five-wicket win over England in the series-deciding third match here on Sunday. The visitors claimed the three-match rubber 2-1. After India were in a spot of bother at 72 for four in a chase of 260, the crack team of Pant (125 not out off 113 balls) and Hardik (71 off 55 and 4/24) engaged in a battle to outdo each other, as the tourists completed the task with 47 balls to spare. Hardik grabbed a career-best 4/24 as a disciplined India bowled out England for 259 with more than four overs left in the innings.

Skipper Jos Buttler top-scored for England with an 80-ball 60, but it was the flamboyant all-rounder from Gujarat, who dominated the first half of the match with his excellent bowling, sending out a warning to the opponents in the year of the T20 World Cup.

In the company of Hardik, Pant then showed his extraordinary skills with the bat as he smashed 16 fours and two sixes in his sublime knock at Old Trafford.

This was after lanky seamer Reece Topley (3/35) again proved to be the wrecker-in-chief by removing the trio of Shikhar Dhawan, Rohit Sharma and Virat Kohli in quick succession.

Dhawan's subdued run in the series continued as he fell for one while Rohit (17) reached out to a delivery that was angling away only to nick it to Joe Root at first slip.

Kohli edged one to Buttler after Topley bowled a ball that angled across.

As has often been the case with him in recent times, Kohli looked good until he was in the middle, but one small mistake and the maestro was walking back shaking his head.

England were on top, as India were struggling at 38 for three in the ninth over.

Suryakumar Yadav made 16 before a Craig Overton ball took off awkwardly for him to nick it to Buttler. India could have been in a bigger hole had Buttler not missed a stumping off Moeen Ali to give Pant a life on 17.

Pant and Hardik then stabilised the innings by mixing caution with aggression. The duo quickly put up a half-century stand to ensure India remained in the game, gradually taking control of the proceedings.

With a wide array of strokes at their disposal, both Pant and Hardik went about their task in a professional manner, rarely looking in any sort of discomfort.

Hardik got out to a magnificent catch by Ben Stokes, but a flurry of boundaries by Pant meant India had it easy in the end.

Earlier, playing in place of injured Jasprit Bumrah, Mohammed Siraj got a massive confidence boost early on, when he dismissed Jonny Bairstow with his third ball of the day. As the England opener shaped up to play it on the leg-side, the bat turned in his hand and the ball ballooned to Shreyas Iyer at mid-off following a leading edge.

His tails up, Siraj then ran in to bowl to the prolific Root, got the ball to move away, and the outside edge was nicely taken by skipper Rohit at second slip. Siraj, in fact, squared Root up with his late movement.

With two of their in-from batters back in the hut for ducks, England were in trouble at 12 for two.

This was after Jason Roy (41) collected three boundaries off Mohammed Shami, including a four through mid off in the very first delivery of the match.

Rohit made a bold move to field first given that eight of the last nine games at Old Trafford have been won by teams batting first.

His English counterpart Buttler was happy to bat first and Bumrah not around was comforting for the hosts. But little did he know that the world-class bowler's replacement for the day would rock their boat so early into their innings, that too on a batting-friendly wicket.

Stokes showed what a good pitch it was to bat on when he offered the face of the blade to push the ball through the off-side for a four.

Roy and Stokes steadied the innings but when their counterattacking partnership reached 54 runs, Hardik had the former caught behind after tying him down by bowling to a tight line and length.

The ball was on the shorter side but there was hardly any room for Roy to free his arms, and the result was England losing their third wicket with 66 runs on the board.

In the middle of a fine spell, Hardik sustained the pressure from his end and soon he had the English Test captain caught and bowled. It was a reward for some brilliant bowling by Hardik who dropped the ball short after he saw a frustrated Stokes stepping out, the all-rounder getting his second wicket maiden.

India's bowling was tight, so much so that England could score just 16 runs in seven overs since Roy's departure.

Returning to the attack, Siraj hit Buttler on the helmet twice in the space of three balls. On both occasions, the physio took a look at him as per the concussion protocol, but the batter seemed okay.

Old Trafford, Manchester England vs South Africa, 3rd ODI
Get the latest updates on IPL Auction 2023 and check out  IPL 2023 and Live Cricket Score. Like us on Facebook or follow us on Twitter for more sports updates. You can also download the NDTV Cricket app for Android or iOS.