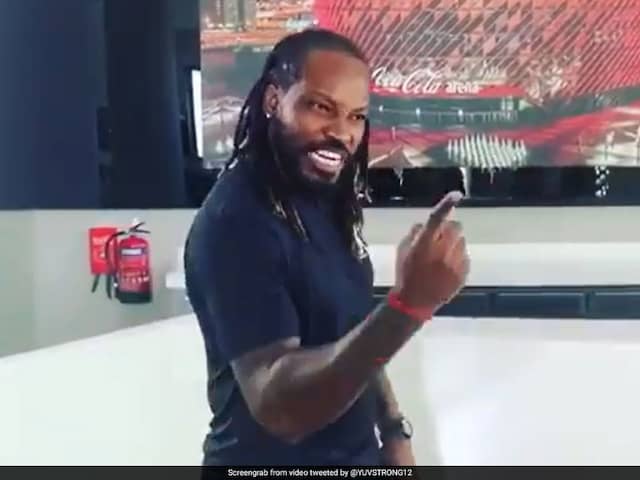 Chris Gayle tried his hand at a Hindi dialogue.© Twitter

Yuvraj Singh, former India all-rounder, took to Twitter on Sunday to share a hilarious video of Chris Gayle trying his hand at Hindi. In the video shared by Yuvraj Singh, Chris Gayle can be seen failing as he tried to deliver a hindi dialogue. As Chris Gayle failed "Confidence meraaaa! Kabar banegi teri !! Well said kaka @chrisgayle333," Yuvraj Singh captioned the video on his Twitter account.

Yuvraj Singh recently returned to the cricket field when he represented India Legends in the Road Safety World Series, which was later postponed due to Coronavirus outbreak.

On the other hand, the West Indies' opening batsman Gayle will represent Kings XI Punjab in the upcoming season of Indian Premier League (IPL).

The 13th edition of the IPL was postponed until April 15, the Board of Control for Cricket in India announced on Friday.

Earlier, the IPL was scheduled to begin on March 29 but the board postponed the tournament amid the coronavirus outbreak.

The BCCI statement came at the back of the announcement made by the Delhi government that it will not allow any sporting activity in the national capital due to the health crisis.

"The BCCI is concerned and sensitive about all its stakeholders, and public health in general, and it is taking all necessary steps to ensure that, all people related to IPL including fans have a safe cricketing experience," the statement read.

On Saturday, the BCCI president Sourav Ganguly said that the IPL will be truncated if it kicks off next month.