Yuvraj Singh played a crucial knock during the quarter-final of the 2011 World Cup to send Australia packing. 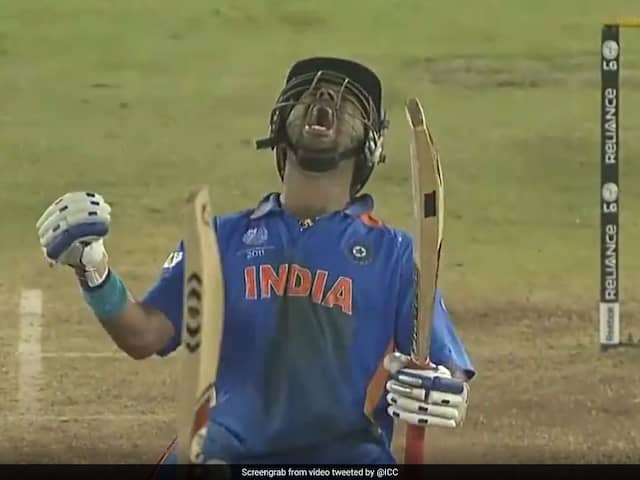 Yuvraj Singh, former Indian batsman, was one of India's batting mainstays during the ICC World Cup 2011. The left-handed batsman played a crucial role throughout India's World Cup campaign and played several match-winning knocks to help India lift the trophy. During the quarter-final against Australia, Yuvraj scored a crucial 57 off 65 balls which was instrumental in helping India win the game. Revisiting the memory, ICC shared a tweet of his knock and captioned of the post, "#OnThisDay in 2011, a ferocious Yuvraj Singh took India to five-wicket win against Australia in the @cricketworldcup quarter-final!". This was their first #CWC win over Australia in 24 years".

57* runs
65 balls
8 fours#OnThisDay in 2011, a ferocious Yuvraj Singh took India to a five-wicket win against Australia in the @cricketworldcup quarter-final!

This was their first #CWC win over Australia in 24 years pic.twitter.com/7Qejhqr5fM

During the ICC World Cup 2011, Yuvraj Singh scored 362 runs in nine games for the country. He scored four half-centuries and one century against the West Indies.

The former Indian middle-order batsman was also very good with the ball as claimed 15 wickets which helped him become the Player of the tournament in the 2011 World Cup.

Yuvraj Singh made his debut back in 2000 against Kenya in the ICC Knockout Trophy at the Gymkhana Club Ground in Nairobi. However, it was in his second game that he got a chance to bat against Australia in which he scored 80 to help India win. He was awarded the player of the match for his performance.

The left-hander announced his retirement last year on June 10, 2019, from all formats of the game. During his ODI career, Yuvraj Singh played 304 matches and scored 8701 runs with an average of 36.5 and a strike rate of 87.7.

Brett Lee Cricket
Get the latest Cricket news, check out the India cricket schedule, Cricket live score . Like us on Facebook or follow us on Twitter for more sports updates. You can also download the NDTV Cricket app for Android or iOS.