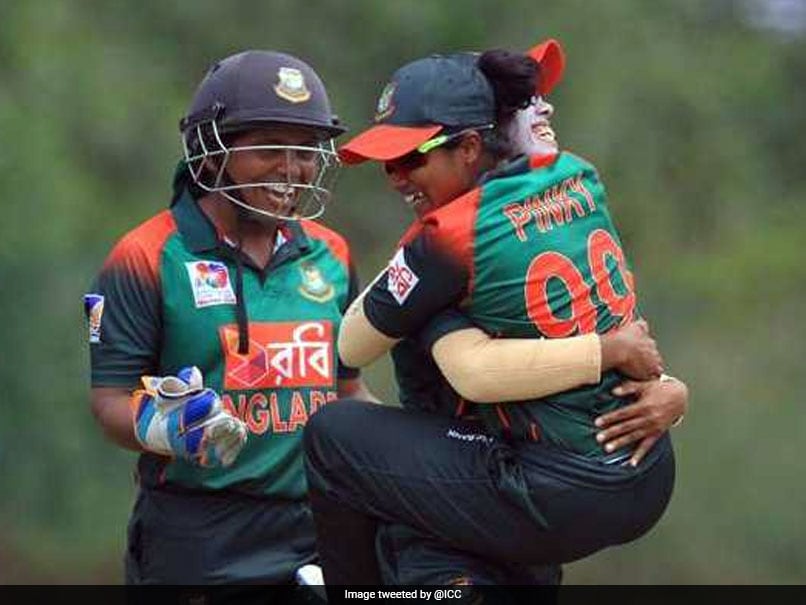 Record defending champions India suffered a three-wicket loss to Bangladesh in the summit clash of the Women's Asia Cup cricket tournament at the Kinrara Academy Oval in Kuala Lumpur on Sunday as the latter lifted their maiden title. After India scored 112/9, thanks to Harmanpreet Kaur's 56 run knock, Bangladesh managed to got over the line in the final ball of their innings. For India, leg-spinner Poonam Yadav returned with figures of 4/9 but her terrific bowling effort ended in-vain courtesy of crucial knocks from Bangladesh's Nigar Sultana (27) and Rumana Ahmed (23).

What a finish! Two needed off the last ball and Jahanara Alam gets them!

2:39 IST: OUT! Rumana run out by Deepti Sharma, who picks the balls and Harmanpreet dislodges the bails.

2:38 IST: WICKET! Sanjida tries to hit over the long on as Veda takes the catch, Harmanpreet strikes. 3 required off 2 balls.

2:35 IST: BOUNDARY! Inside-out shot, the fall races to the fence. Jemmimah Rodrigues failed to reach the ball. 3 runs off 3 balls.

2:29 IST: OUT! Fahima Khatun has been stumped by Taniya Bhatia while trying to slog Harmanpreet, Bangladesh 96/5 after 17.3 overs.

2:27 IST: BOUNDARY! Fahima Khatun takes a top edge off  Harmanpreet Kaur's delivery as the ball races to the fence over the head of the keeper.

2:20 IST: OUT! In-form Nigar Sultana has been sent back by Poonam Yadav through her tossed up delivery which was referred to the third umpire for no-ball. Yadav bags her fourth to keep India in the hunt.

2:17 IST: BOUNDARY! Deft touch from Nigar and the ball races down to the boundary past the keeper, Jhulan has been expensive. Bangladesh 82/3 in 15 overs.

2:13 IST: WIDE! Jhulan Goswami tries to ball the slower one, drifts down the leg stump, wide ball signaled by the umpire.

2:10 IST: NOT OUT! Mithali Raj makes a direct hit but the batter survives as the bails were dislodged before the ball hit the stumps by Anuja Patil.

2:01 IST: Bangladesh need 54 runs off 44 balls, pressure begging to mount on the Bangladesh as the required run-rate has gone a hint over 7 now.

1:59 IST: OUT! Fargana Hoque catches a snick off Poonam Yadav as she tries to smash the ball out of the ground, Yadav has picked up her third wicket here. Bangladesh 55/3 after 11.3 overs.

1:51 IST: BOUNDARY! Paddle sweep from Nigar and the ball races down to boundary, Bangladesh 48/1 in 9.1 overs.

1:42 IST: WICKET AGAIN! Shamima tries to drive the ball outside off stump by Poonam, Mithali Raj collects it. Both set batters sent back. Bangaldesh 35/2 in 7 overs.

1:40 IST: OUT! Ayasha tries to sweep, takes the top edge from Poonam Yadav which is easily collected by Jhulan Goswami. Bangladesh 35/1 in 6.5 overs.

1:35 IST: Back-to-back boundaries for Bangladesh as they race down to 33/0 after the end of powerplay.

1:33 IST: BOUNDARY! Edged by Ayasha Rahman and goes past the wicket-keeper for a boundary off Deepti Sharma. Bangladesh 24/0 after 5 overs.

1:29 IST: Another controlled over from the Indians, courtesy of Anuja Patil. Bangladesh 17/0 after 4 overs.

1:23 IST: 11 runs off the second over, Shikha conceded two boundaries as Deepti finished off the over with a wide, Bangladesh 12/0 after 2 overs.

1:20 IST: Shikha Pandey has been helped off the pitch by her teammates, looks like she has done herself some damage after 4 balls.

1:15 IST: Fine start by Bisht, just one run from the first over.

1:14 IST: Openers Shamima Sultana and Ayasha Rahman walk to the crease for Bangladesh as Ekta Bisht opens the bowling for the record Asia Cup Champions.

1:02 IST: OUT! Lone warrior Harmanpreet Kaur departs on the final delivery by Khadija Kubra as she tries to hit a maximum but the ball ends in the safe arms of Jahanara. India pile up 112/9 at the end of the innings.

12:58 IST: OUT! Jhulan Goswami walks back after she tried to hit the ball which grabs her pad and wicket keeper Sultana quickly collects it to run her out. India 107/8 in 19.1 overs.

Half-century! What a fine knock this has been from India's captain @ImHarmanpreet as she brings up her fifty in 39 balls with the help of 7 boundaries. She has held India's innings together.
IND 1077 after 19 overs. #INDvBAN #AsiaCupfinal pic.twitter.com/THVcRgGZs3

12:56 IST: BOUNDARY! Harmanpreet notches up her half century as she hits her seventh boundary of the innings, India 107/7 in 19 overs.

12:50 IST: BOUNDARY! Harmanpreet sweeps Khadija for a much needed boundary!

12:45 IST: Jhulan Goswami punches through the back-foot over the mid-on for four vital runs.

12:35 IST: STUMPED! Taniya tried to step down, misses the ball completely bowled by Rumana Ahmed as Shamima Sultana makes no mistake to gather it and stump her out. India 72/6 in 14.2 overs.

12:32 IST: BOUNDARY! Harmanpreet dances down the pitch and hits the ball that races through the mid-wicket for four vital runs.

12:28 IST: BOWLED! Veda tried to sweep the ball from Salma Khatun, a pre-meditated shot but the ball ends up hitting the timber! India 62/5 in 12.3 overs.

12:20 IST: FOUR MORE! Veda Krishnamurthy this time, opens the face of the bat and the ball races away to the boundary. Jahanara Alam has conceded two boundaries in three balls now.

12:18 IST: Boundary! Harmanpreet chips the ball down the deep mid-wicket and the ball sails to the fence. India 46/4 after 10.1 overs.

12:12 IST: Boundary! Harmanpreet opens the face of the bat and the ball races away to the boundary. Meanwhile, Veda Krishnamurthy is the new batter at the crease.

12:07 IST: OUT! Harmanpreet plays a defensive shot, Anuja tried to snatch a cheeky single but sent back as she falls in line of the throw been made on the stumps. Anuja has been given out for obstructing the field, India 32/4 in 8.2 overs.

12:03 IST: Anuja Patil steps in the crease along side skipper Harmanpreet Kaur.

11:58 IST: BOWLED! Deepti Sharma tried to play a lose shot down the ground and she has been cleaned up by Jahanara Alam. Deepti departs for 4, India 26/2 in 6.4 overs.

11:45 IST: WICKET! Early setback for India as Smriti Mandhana is run out for 7

11:31 IST: Smriti Mandhana and Mithali Raj make their way out to bat.

11:08 IST: Bangladesh have won the toss and elected to field.

10:51 IST: Six-time champions India are looking to clinch their 7th straight Asia Cup title but standing in their way are Bangladesh.

10:50 IST: Hello and welcome the live blog of the women's Asia Cup T20 final between India and Bangladesh at the Kinrara Academy Oval in Kuala Lumpur.

Electing to bat, Pakistan folded up for a meagre 72/7 with Sana Mir (20 not out) and Nahida Khan (18) managing to reach the double figures in a lacklustre batting effort.

In response, Harmanpreet (34 not out) and her deputy Smriti Mandhana (38) steered India to a comfortable victory with 23 balls to spare after starting on a shaky note.

Earlier, left-arm spinner Ekta Bisht spun a web around the Pakistanis with three wickets and was well assisted by the other Indian bowlers who stuck to a disciplined effort.

During their chase, India got off to a forgettable start, losing former skipper Mithali Raj and Deepti Sharma for ducks with the scoreboard ticking 5/2.

But thereafter the defending champions did not look back as the left-right combo of Smriti and Harmanpreet forged a brilliant 65-run third wicket stand to take the side within sniffing distance of victory.

India Women Smriti Mandhana Mithali Raj Harmanpreet Kaur Cricket
Get the latest updates on ICC T20 Worldcup 2022 and CWG 2022 check out the Schedule, Live Score and Medals Tally. Like us on Facebook or follow us on Twitter for more sports updates. You can also download the NDTV Cricket app for Android or iOS.