Will Convey Concerns Over Pakistan To ICC: Cricket Board To NDTV

The Indian cricket board Committee of Administrators told NDTV that an email is being sent to the ICC to express concern over Pulwama attack.

The Board of Control for Cricket in India's (BCCI) Committee of Administrators has taken an unanimous decision to send an email to the International Cricket Council (ICC) with some key points, namely to express concern over the Pulwama attack and to tell the cricketing community in future about where such terrorism emanates. The CoA told NDTV that the decision was taken unanimously by the three member committee, which includes Chairman Vinod Rai, Diana Edulji and the newly-inducted Lt. Gen. Ravi Thogde, who was included in the committee just yesterday. 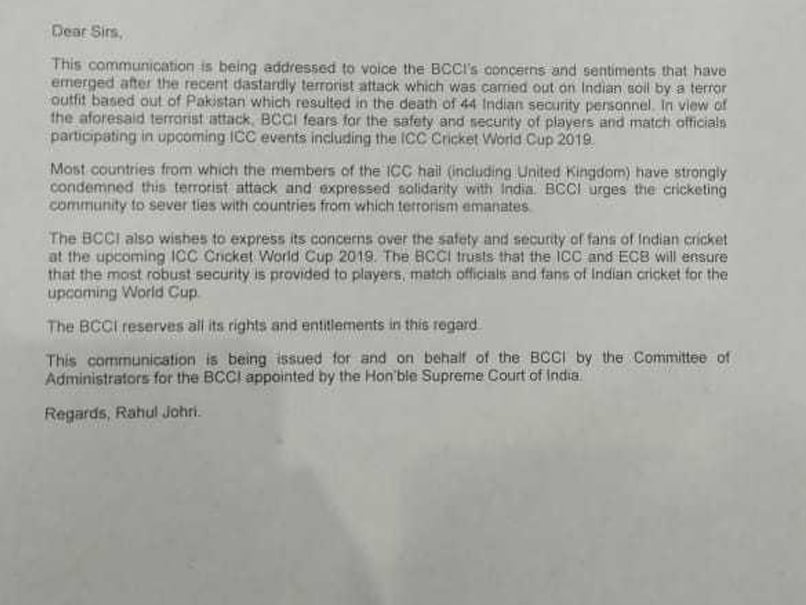 "We are expressing two concerns to the ICC. We will ask for more protection for players during the World Cup and we are telling the cricketing community in future we must to sever ties with nations from which such terror emanates," CoA Chairman Vinod Rai said.

The CoA also said that there would be no regular opening ceremony for the Indian Premier League (IPL) 2019 and the budget for that will be disbursed among the families of the jawans killed in the Pulwama terrorist attack.

The committee members also said that there had been no communication with the players regarding this.

Many former and present cricketers, including Sourav Ganguly, Chetan Chauhan and Harbhajan Singh have unequivocally denounced the Pakistan-backed Pulwama terror attack that killed 40 CRPF troopers on February 14 but said that pulling out of the clash against the green brigade will only result in India losing out vital points.

According to reports, the CoA had on Wednesday directed the BCCI CEO Rahul Johri to write a letter to the ICC to ban Sarfraz Ahmed's men from the World Cup, a ploy which could backfire as the other participants may not support India's call.