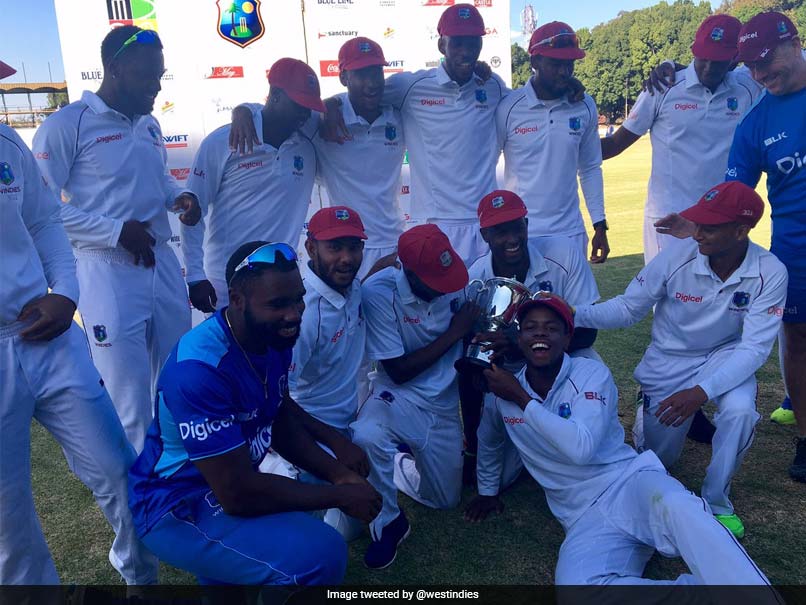 An obstinate stand of 91 between Regis Chakabva and Graeme Cremer secured Zimbabwe's first draw in Test cricket since 2005, leaving the West Indies to settle for a 1-0 series victory. The West Indies were on course to win the second Test on the final day when Sikandar Raza's dismissal for 89 left Zimbabwe on 210 for seven, leading by just 88 runs with nearly 64 overs still left to play.

But Chakabva and Cremer combined in an unbroken stand for the eighth wicket that chewed up nearly 50 overs, leaving West Indies coach Stuart Law frustrated at the slow, placid nature of a Queens Sports Club pitch that permitted just 27 wickets in five days.

"I'd just like to see a more even contest between bat and ball," said Law. "There are a lot of people saying that Test cricket is dying, and on a pitch like this it is."

Both sides had an outside chance of forcing a result when Zimbabwe went into the final day on 140 for four in their second innings, leading by 18 runs.

But Zimbabwe's hopes narrowed when they lost Peter Moor for 42 in the fourth over of the day, particularly with man of the match Raza tiring from his efforts.

The allrounder became just the second player after South Africa's Jacques Kallis to score 80 or more runs in both innings of a Test and take a five-wicket haul, but was ultimately undone by a vicious inswinger from Jason Holder after lunch.

Chakabva and Cremer fought back, but the latter enjoyed some fortune. Three times the West Indies had appeals against Cremer turned down by the umpires, only for replays to suggest the batsman should have been given out.

Having used up their two reviews, there was nothing the visitors could do about it.

"It costs a lot of money to set up the cameras and have the technology available to us, and to only be able to use it for two incorrect appeals, I think is ludicrous," said Law.

With the lead edging past 150 after tea, Zimbabwe gave some thought to declaring and attempting to gain a share of the series, but thought better of it.

"We know it's quite hard to take 10 wickets in 50 overs, let alone 30, so after Raza got out we almost had to shut up shop and just take overs out of the game to make sure we couldn't lose the Test match," said Cremer.

Zimbabwe went on to score 301 for seven before the two captains shook hands on the draw.

The West Indies were able to celebrate their first Test series win under captain Holder, who took up the role more than two years ago.

"There was only one team out there today trying to win it, and unfortunately we weren't able to do it. I can't fault the commitment of our players," said Law.

"Everybody has worked really hard to get this 1-0 victory and we're going to celebrate this series win."

Comments
Topics mentioned in this article
West Indies Cricket Team Zimbabwe Cricket Team Jason Holder Sikandar Raza Cricket
Get the latest updates on ICC T20 Worldcup 2022 and CWG 2022 check out the Schedule, Live Score and Medals Tally. Like us on Facebook or follow us on Twitter for more sports updates. You can also download the NDTV Cricket app for Android or iOS.