During the West Indies vs World XI match, Shahid Afridi was asked by former England captain and commentator Nasser Hussain if he had any plans of a comeback. 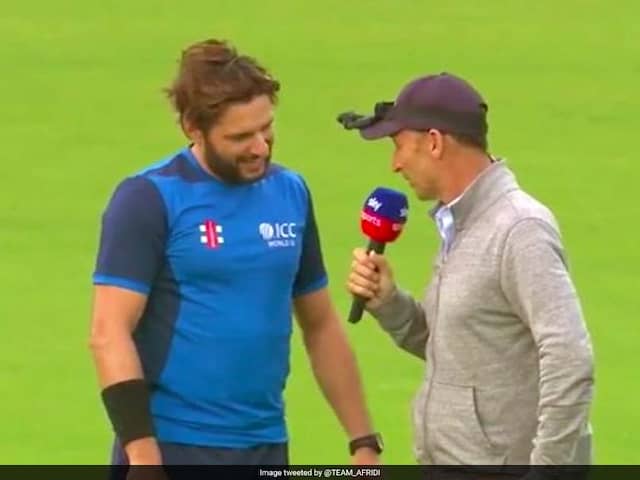 Shahid Afridi gave a hilarious reply to Nasser Hussain when asked if he had any plans of a comeback.© Twitter

Shahid Afridi was given a guard of honour during the T20I match between West Indies and World XI at Lord’s cricket stadium on Thursday. The Pakistan all-rounder bid farewell to international cricket, captaining the World XI team during the charity match that was played to raise funds to rebuild cricket grounds in Anguilla and Dominica in the Caribbean, damaged by hurricanes Irma and Maria that swept through the region in September 2017. During the match, Afridi was asked by former England captain and commentator Nasser Hussain if he had any plans of a comeback.

Hussain couldn't hide his laughter after asking the question. Afridi put his left hand on Hussain's shoulder and replied: "No that's it. You can see my situation with the injury."

Nasser Hussain: Any plans of any more comeback?
Lala: No, u can see my conditionpic.twitter.com/do7d6MjSJ8

Afridi, who has 11,196 runs and 541 wickets in international cricket, took over the captaincy role for the World XI after England’s Eoin Morgan pulled out of the match due to a fractured finger.

Evin Lewis starred with the bat for the West Indies, smashing 58 off 26 balls, including five sixes and as many fours. Spinner Samuel Badree got the job done with the ball, taking two wickets and giving away just four runs in his three overs.

Afridi donated USD 20,000 to Hurricane relief from his foundation, while all the players donated their match fees to the charity.

Speaking about the guard of honour, Afridi said,: "That's something I'll never forget".

"For that to happen at the home of cricket, it's massive. The cause was everything tonight, and to have been able to help, it's fantastic.

"Thanks to everyone who came out and supported this," he added.

Shahid Afridi Nasser Hussain Cricket
Get the latest Cricket news, check out the India cricket schedule, Cricket live score . Like us on Facebook or follow us on Twitter for more sports updates. You can also download the NDTV Cricket app for Android or iOS.