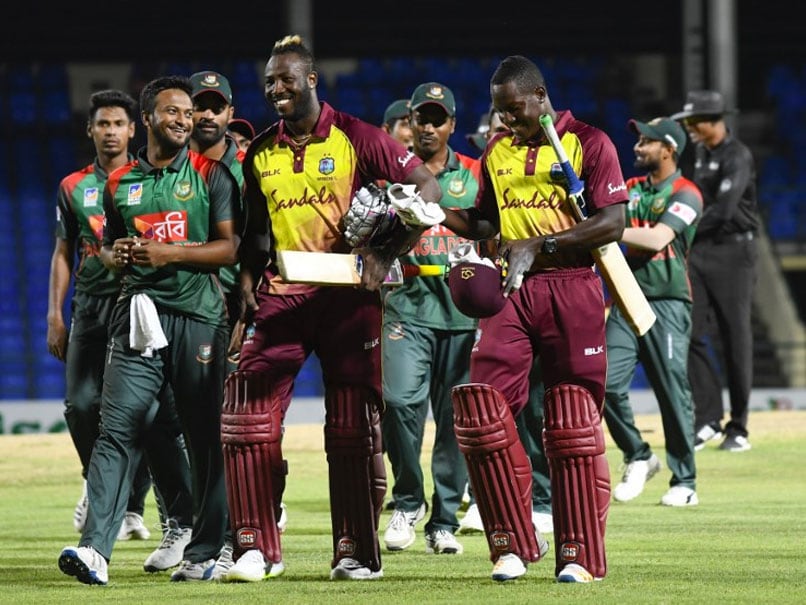 Kesrick Williams' career-best bowling figures and a hurricane batting cameo by Andre Russell highlighted an efficient effort by the West Indies in defeating Bangladeshby seven wickets in the rain-affected opener of the three-match T20 International series at Warner Park in St Kitts on Tuesday. After off-spinner Ashley Nurse rocked the visitors with the wickets of both openers without scoring in the first over of the match, fast bowler Williams claimed four for 28 to ensure there would be no substantial recovery for the tourists despite a fighting topscore of 35 from Mahmudullah as they finished at 143 for nine.

Set a revised target of 91 off 11 overs after rain delayed the West Indies response by more than 90 minutes, Russell blazed an unbeaten 35 off 21 balls with three fours and three sixes to ensure there were no alarms for the home side in taking a 1-0 lead ahead of the final two matches in Florida at the weekend.

Russell and Marlon Samuels (25) put on 42 for the third wicket after seamer Mustafizur Rahman despatched opening batsmen Evin Lewis and Andre Fletcher without conceding a run in his opening over to give the Bangladeshis hope of restraining the home side.

Rovman Powell then joined Russell after Samuels fell to Rubel Hossain to ensure the Caribbean team romped to the target.

"Our intention is to win this series 3-0 after the disappointment of the one-dayers," said Russell, who was chosen as "Man of the Match." "We are mindful of how good this Bangladesh side is but we are feeling good about ourselves."

Put in to bat earlier by West Indies captain Carlos Brathwaite, Bangladesh got off to the worst possible start.

Tamim Iqbal, who scored two centuries and a fifty to be "Man of the Series" in the one-dayers, was smartly stumped by Denesh Ramdin to the first ball of the match while opening partner Soumya Sarkar also failed to score, being bowled by Nurse three balls later.

Curiously, it was the only over bowled by the off-spinner in the innings.

"I know I will get a lot of stick for that after the experiment of bowling Ashley first paid off," said Brathwaite. "I just couldn't find a way to give him another over because the other bowlers were doing such a good job."

Despite the loss of those early wickets, Bangladesh were progressing at almost ten runs per over halfway through the innings.

But that scoring rate dropped alarmingly as the wickets continued to tumble. Mahmudullah managed useful partnerships with Liton Das and Mushfiqur Rahim, however Williams' clever variations of pace strangled the innings, his dismissal of Mahmudullah effectively ending the tourists' hopes of a substantial score.

"We lost too many wickets at crucial times and that cost us," said Bangladesh captain Shakib al Hasan.

Andre Russell Cricket
Get the latest updates on IND vs NZ 2021, check out the Schedule and Live Score . Like us on Facebook or follow us on Twitter for more sports updates. You can also download the NDTV Cricket app for Android or iOS.