The 49-year-old, who played 93 Tests and 269 ODIs for his country, also seemed disappointed with the way Indian cricket board has functioned over the past few years. 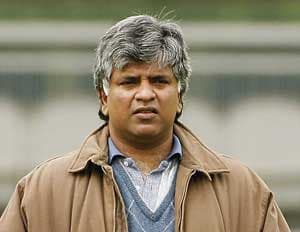 There was a time when the budding cricketers of Sri Lanka looked upto India for learning the nuances of the game but former captain Arjuna Ranatunga feels this can no longer happen due to the advent of Twenty20.

"It's unfortunate that most youngsters only want to play the shorter version for financial gains. Let's be very clear that India won't have any more Sachin Tendulkar or a Sunil Gavaskar. You won't find the elegance of Tiger Pataudi," the World Cup winning Lankan captain told a select gathering after a seminar at the FICCI here on Sunday.

"It was a part of our learning process as youngsters to look upto Indian cricket. I don't think we can learn from India anymore," Ranatunga said when asked whether the rise of Twenty20 will lead to India playing lesser number of Test matches in the near future.

The 49-year-old, who played 93 Tests and 269 ODIs for his country, also seemed disappointed with the way Indian cricket board has functioned over the past few years.

"I think that BCCI should come under the Right To Information (RTI) act as they are not answerable to anyone, not even to their union sports ministry. That's why they do whatever they want. In Sri Lanka, at least we have the right to criticise Sri Lanka Cricket (SLC) in parliament and get it corrected," Ranatunga stated.

He is not against politicians entering sports administration but feels technical decisions should be taken by cricketers in the board.

"Cricketing decisions should be limited to cricketers. That's the reason I feel insecure as a cricketer when I find that a player of (Dilip) Vengsarkar's stature loses to a politician. (Vengsarkar had lost the MCA polls to Vilasrao Deshmukh). In Sri Lanka Cricket, most of the administrators are appointed with blessings of president."

Ranatunga reiterated that he is yet to digest as to why the erstwhile Sri Lankan skipper Kumar Sangakkara made four changes in the 2011 World Cup final against India in Mumbai which the island nation lost.

"Four changes in a final. I was surprised sitting in a TV studio alongside Kapil (Dev). I told the channel to cross-check if it's right. There were players who were outsiders as far as that squad is concerned.

"I don't know what happened as only the Sri Lankan captain could tell us about those changes. I still believe we should have won that final."

Someone who doesn't mince words, Ranatunga was very vocal about how SLC is not ready to handle the transition phase once veterans Mahela Jayawardene and Kumar Sangakkara call time on their career.

"When we (and Aravinda de Silva) were getting old, we introduced Sanath (Jayasuriya) as vice-captain. Also we had players like Marvan Atapattu, Russel Arnold with whom we persisted for a long time.

"You need to give players a long rope and not discard them after one or two failures. That's how you build a team," the cocky former skipper recollected.

As has been his philosophy regarding T20 cricket, Ranatunga is certainly not amused that Lasith Malinga decided to forego his Test career to prolong his future in limited overs and especially T20.

"If I start speaking about Malinga, I don't know where it will end. I believe that when he first expressed his desire to retire from Tests and play only ODIs and T20, the captain should have spoken to him.

"I believe there shouldn't be any 'exceptionally separate' cricketer in a group. In a team, all are equals. During our time, Aravinda (De Silva) was a world class player. But he was never treated differently from others," he said.

Ranatunga is also peeved that a lot of cricketers seek political interference to get their job done.

"The moment you try to take any action against errant cricketers, he invariably goes to a politician and the person who is trying to set things in order is then removed. I am glad that new chairman of selectors Sanath Jayasuriya has a long-term vision. Hopefully, he would be able to deliver the goods."

The portly cricketer feels that regulation of sports betting won't be of any help to cure the malaise of match-fixing or spot-fixing.

"I don't agree that regulation of sports betting can change the scenario as there are no guarantees that you can keep away the unwanted elements from an organized sector."

Comments
Topics mentioned in this article
Cricket Arjuna Ranatunga Nathan McCullum Kumar Sangakkara New Zealand Cricket Team Sri Lanka Cricket Team Kings XI Punjab
Get the latest updates on IPL 2020, check out the IPL Schedule for 2020 and Indian Premier League (IPL) Cricket live score . Like us on Facebook or follow us on Twitter for more sports updates. You can also download the NDTV Cricket app for Android or iOS.