The 33-year-old batter, who led the Indian team to a historic Test series triumph in Australia last year, took to social media on Wednesday and posted a video of his visit to the school. 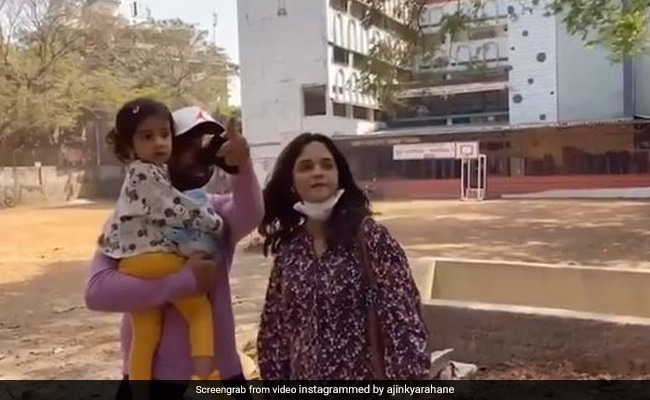 Ajinkya Rahane with his wife and daughter

Indian cricketer Ajinkya Rahane took a nostalgic walk down to the memory lane when he visited his alma mater SV Joshi High School in Dombivli, reminiscing memories spent at the school. The 33-year-old batter, who led the Indian team to a historic Test series triumph in Australia last year, took to social media on Wednesday and posted a video of his visit to the school.

"There's something about visiting your roots that keeps you grounded. Was at Dombivli with my family and irrespective of how the place changes, it holds the same place in my heart!," he captioned it.

Rahane was accompanied by his wife Radhika and daughter Aarya as he also took them to the ground, located in the same city, where he learnt the cricketing basics.

He looked back at the time when he took up the sport and dreamed about representing the country at the highest level.'

"I wanted to come here for many years and today it happened. I started cricket from this place, the school backed me. There are several changes now to the school but coming here felt special," he said.

Rahane, who recently scored a century in a 2021-22 Ranji Trophy encounter, is now gearing up for the upcoming Indian Premier League where he will play for Kolkata Knight Riders.