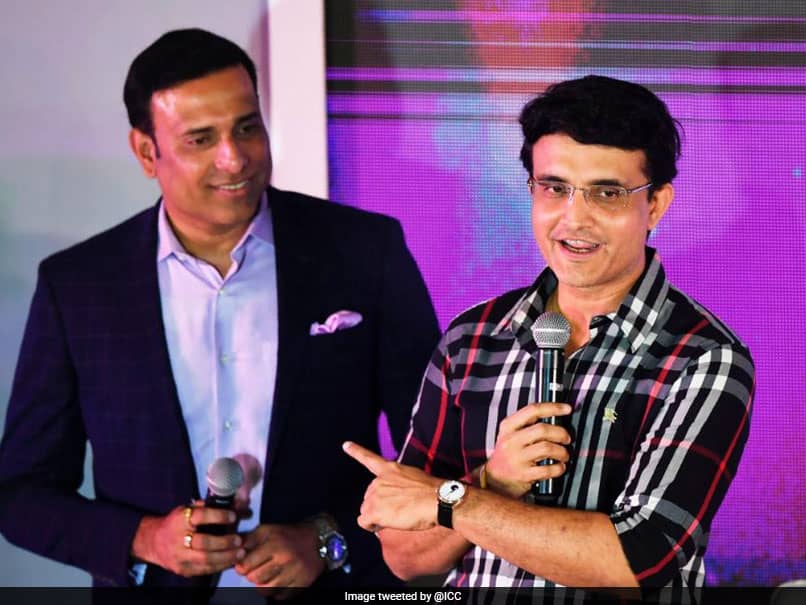 VVS Laxman was a special invitee as the Cricket Association of Bengal felicitated Sourav Ganguly.© Twitter

Terming Sourav Ganguly, former India captain, as a "very very special" batting great VVS Laxman on Friday urged the newly-elected BCCI president to revive the National Cricket Academy (NCA) so that the Indian team's bench strength continues to remain strong. Laxman and Ganguly's first captain, Mohammad Azharuddin, were special invitees as the Cricket Association of Bengal (CAB) felicitated Ganguly who took over as the 39th BCCI President in Mumbai on Wednesday. "If you ask me one thing, it would be how Sourav can revive the NCA," Laxman said while speaking on the stage flanked by Ganguly and Azhar.

"The greatness of this Indian team is their bench strength. You look at this South Africa side and it is the most depleted I have seen. This is because their domestic structure is not strong. The reason why the Indian team is doing well is because the domestic structure is so good. Through the NCA, you can produce future champions for a long period of time. Whenever rotation is required, you can come and replace established players," Laxman said.

Azhar said that he would look forward to Ganguly leading the Board of Control for Cricket in India (BCCI) like he had led the Indian cricket team.

Speaking about Ganguly, Laxman further termed him as a "very very special" captain.

"It is a great honour that my colleague is BCCI President. Ajju bhai (Azhar) is my idol and now he is HCA (Hyderabad Cricket Association) President.

"Since his debut at Lord's, he did not look back. Sourav the cricketer is special, but for me Sourav the captain is very very special," Laxman said.

"The way he revived the fortunes of the Indian cricket team, gave them security, Indian cricket did not look back since then. A leader becomes inspiring when he leads by example," Laxman said.

Laxman narrated a story when Ganguly was the CAB joint secretary in 2014, underlining how he had to shed his star image to get into administration.

"I came here as batting consultant, and Sourav was joint secretary at that time. When I entered his room, his small room shocked me. He is the most successful captain of Indian cricket. It surprised and inspired me. You forget that you are a legend of world cricket, you are a prince of Kolkata and a blue eyed boy. He was fulfilling the role of joint secretary."

Laxman, who is the batting consultant in CAB's Vision 2020 programme, further said that Ganguly is very passionate about cricketers and excels at whatever he does.

"There were times when Bengal cricket was not doing well and Sourav texted me late at night what can be done. Recently during the World Cup, me him and Viru (Virender Sehwag) went out for a meal in Birmingham and then again I realised how much he loves the game of cricket. He excels in everything he does. Everyone wants a piece of him."

Ganguly termed Laxman as his life saver for his epic knock of 281 at Eden Gardens in 2001.

"Life saver of Indian cricket is VVS. His 281 changed Indian cricket and my life as a captain. I call VVS my life saver. He is one of the best persons you will meet."

India Cricket Team VVS Laxman Sourav Ganguly Mohammad Azharuddin Cricket
Get the latest updates on India vs Australia Series, check out the India vs Australia Schedule for 2020-21 and Ind vs Aus live score . Like us on Facebook or follow us on Twitter for more sports updates. You can also download the NDTV Cricket app for Android or iOS.