Shahid Afridi and Virender Sehwag are among the former stars involved in the T10 tournament. 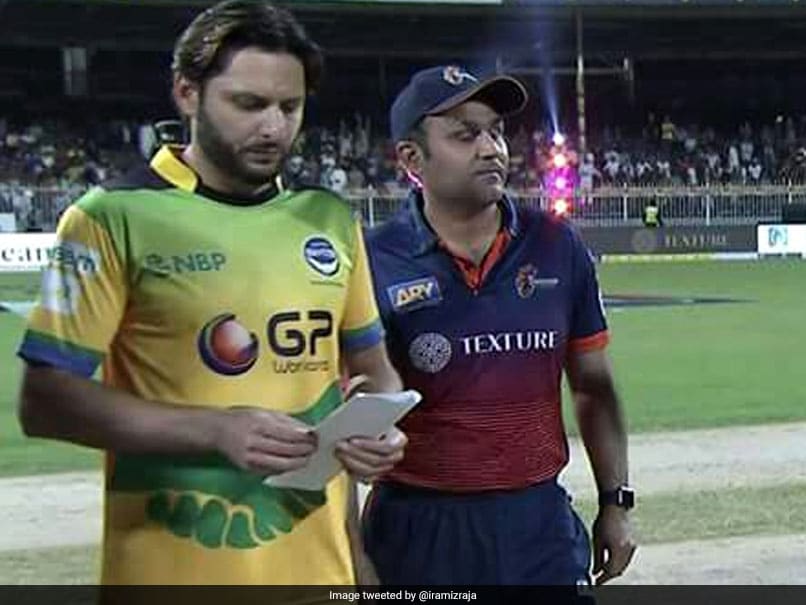 Shahid Afridi bowling to Virender Sehwag seemed the most unlikely of scenarios after both players took international retirement. However, the match-up became a reality when Sehwag-led Maratha Arabians took on Afridi's Pakhtoons on the opening night of the new T10 League tournament in Sharjah. Afridi was the star of the show as he claimed a hat-trick with the first three balls he bowled and derailed Maratha's chase and gave his team a 25-run win. The former Pakistan captain ended the match with figures of three for 19 from his designated two overs.

After four overs, the Maratha Arabians were going great guns and had reached 46 for two in their chase of 122. However, all that changed quickly as Afridi removed South African Rilee Rossouw, who holed out to Afridi's first ball in the match.

Next to go was West Indian all-rounder Dwayne Bravo, who was trapped LBW dead in front of the stumps. Afridi's third and hat-trick victim was none other than Sehwag, who like Bravo failed to read the in-dipping slider and was sent packing.

From being two-down, the Maratha Warriors were reduced to 46 for five and then 49 for six with Imad Wasim falling to Sohail Khan in the first ball of the fifth over.

Alex Hales fought a lone battle for the Maratha Arabians with an unbeaten 57 off 26 balls but with only one other batsman from the team reaching two digits, the Arabians were restricted to 96 for seven in their 10 overs.

Comments
Topics mentioned in this article
India Cricket Team Pakistan Cricket Team Shahid Afridi Virender Sehwag Cricket
Get the latest updates on Fifa Worldcup 2022 and check out  Fifa World Cup Schedule, Stats and Live Cricket Score. Like us on Facebook or follow us on Twitter for more sports updates. You can also download the NDTV Cricket app for Android or iOS.