Virat Kohli opened the Mumbai leg of Pro Kabaddi Season 7 at the NSCI Dome in Worli on Saturday. 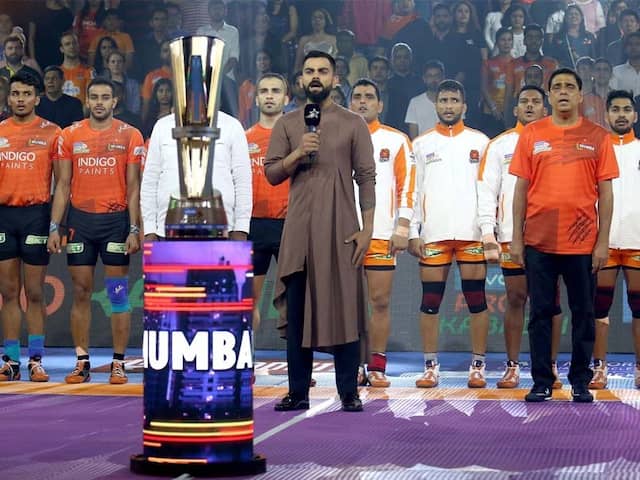 Virat Kohli's next international assignment will begin on August 3.© PKL

Virat Kohli, the India cricket team captain, opened the Mumbai leg of Pro Kabaddi Season 7 at the NSCI Dome in Worli on Saturday. The special guest also sang the National Anthem ahead of the Maharashtra Derby as home team U Mumba took on the Puneri Paltan. Kohli seemed to be enjoying the tackles and raids as the camera kept panning on him. However, the fans on social media could not stop raving about how proud they were after Kohli sang the anthem.

Here are some reactions.

#lepanga??
Unbeatable #KingKohli at @ProKabaddi yesterday night..
Enjoyed a lot seeing firstly your talk before start and our nations national anthem and then your expression at every raid or defence, I enjoyed watching u more than the match..
Love you my jaan @imVkohli ?????? pic.twitter.com/KBN3WSsG23

Nothing feels better than seeing our national icon singing our national anthem.@imVkohli is the legend,He is best Cricket player of the world and the mentor of all #CricketMeriJaan. My name is Virat and I feel proud of it as me and my God name is same. Love you Sir.@ViratLovers pic.twitter.com/H1XsIp2QSU

Didn't expect this look though??
How well he sung the national anthem

Virat Kohli singing our national anthem - it just cannot get any better. ????
What a way to start to this weekend#ProKabaddi

Virat Kohli also spoke about his love for Kabaddi and described how the game he played in childhood had grown rapidly with the introduction of the Pro Kabaddi League.

"Kabaddi has taken a leap in the sports culture in our country since the inception of Pro Kabaddi League. Seeing a sport that we all have played as kids get to this stature today gives a different feeling altogether, especially when you know that the Indian kabaddi team is one of the best ones in the world," Kohli said.

"Then seeing how players from all over the globe come to India to be a part of the PKL shows that the level of the sport has been escalated exponentially. The reason kabaddi has become a world recognised sport is due to the fitness and determination of Indian kabaddi players," he added.

Hours before the match, Kohli had also tweeted about his upcoming appearance at the Pro Kabaddi match.

Kabaddi, #IsseToughKuchNahi! Who is joining me in Mumbai to witness this LIVE?
Watch me at tonight's @ProKabaddi game at 7 PM. Only on @StarSportsIndia pic.twitter.com/JJQi9I8zs1

Kohli's next international assignment will begin on August 3 as India are scheduled to play a full away series against the West Indies.

Virat Kohli Cricket Kabaddi
Get the latest updates on IPL 2020, check out the IPL Schedule for 2020 and Indian Premier League (IPL) Cricket live score . Like us on Facebook or follow us on Twitter for more sports updates. You can also download the NDTV Cricket app for Android or iOS.