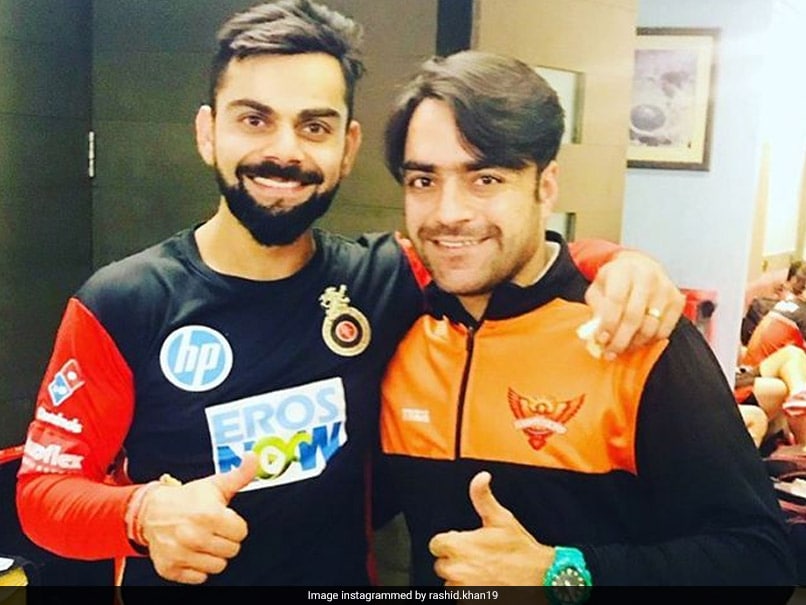 Rashid Khan named Virat Kohli as one of the toughest batsman he has bowled to.© Instagram

Afghanistan spinner Rashid Khansaid that bowling against great batsmen like Virat Kohli, AB de Villiers, Chris Gayle and Andre Russell is very tough, especially on small grounds. Rashid was doing an Instagram live session with India spinner Yuzvendra Chahal. He then revealed that playing in the Indian Premier League (IPL) was his dream as it features players from every part of the world.

When asked about was IPL his first T20 league Rashid replied, "Before IPL, I had played in Bangladesh Premier League. It was a different experience in IPL. It was a dream to play in IPL, I grew up watching it on TV. All the international players are there in the league. The coaching staff too is very experienced."

Recalling his IPL debut the spinner said he was nervous in the match but later on enjoyed his spell.

"My debut was against you guys (RCB). I got hit for boundary for the first ball. It was a tough match for me as there was due in the ground. I was nervous, when I got my first wicket I gained confidence and after getting the second wicket I was enjoying the bowling," the spinner said.

"Bowling to Virat bhai, ABD, Russell and Chris Gayle is very tough on small grounds. You don't get much support from the wicket and boundaries are short too so before the match these things come in mind," he added.

The Board of Control for Cricket in India (BCCI) is ready to host the Indian Premier League (IPL) behind closed doors and is working on all possible options to stage the tournament this year, board president Sourav Ganguly had stated in his letter to all affiliated members of the body.

The IPL was scheduled to commence from March 29 but was postponed indefinitely due to the coronavirus pandemic. It is being speculated that the tournament might be played in the October-November window if the ICC decides to postpone the T20 World Cup.

England will be playing a three-match Test series against the West Indies behind closed doors beginning from July 8. The matches will be held at Hampshire's Ageas Bowl and Lancashire's Emirates Old Trafford.

These two venues have been chosen as bio-secure venues.

Andre Russell Cricket
Get the latest updates on SA vs IND 2021-22, check out the Schedule and Live Score . Like us on Facebook or follow us on Twitter for more sports updates. You can also download the NDTV Cricket app for Android or iOS.