Cheteshwar Pujara stroked a fine fifty but it was not enough for Saurashtra while Gautam Gambhir-led Delhi stayed on course for the quarter-finals. Gurkeerat Singh Mann's century helped Punjab to a thrilling win over Assam in the Vijay Hazare Trophy. 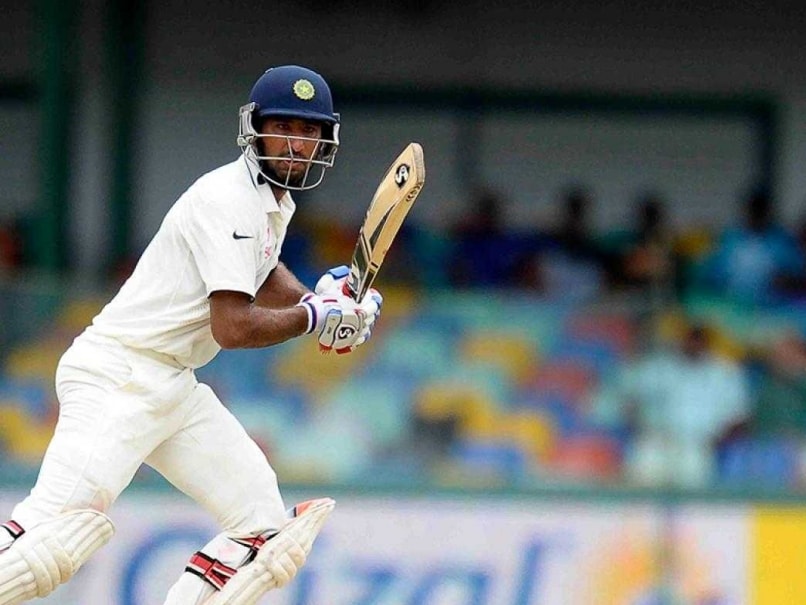 Cheteshwar Pujara's fifty for Saurashtra was not enough for them to avoid defeat against Himachal Pradesh in the Vijay Hazare Trophy.© AFP

Cheteshwar Pujara scored a gritty half-century for Saurashtra but it went in vain. Gurkeerat Singh Mann smashed an amazing century as Punjab pulled off a sensational win against Assam. Here is a wrap of all the action in the Vijay Hazare Trophy.

Opting to bat after winning the toss, Saurashtra were all out for 195 in 48.4 overs at the Madhavrao Scindia Cricket Ground.

Cheteshwar Pujara top-scored for Saurashtra with 73 off 113 balls. He hit six boundaries.

MS Dhoni did not have much to do as Jharkhand hammered Haryana by nine wickets in a Vijay Hazare Group B match here today.

Pacer Varun Aaron led side bundled out Haryana for 133 and chased down the paltry target in 29.4 overs, thanks to Ishank Jaggi (62 not out) and Kumar Deobrat (39 not out).

It was Jharkhand's third win in four matches and they now lead the group with 12 points.

Batting first, Services managed only 192 for 8 in 50 overs with former KKR player Yashpal Singh top scoring with 56. Seamer Mohammed provided his team with crucial breakthroughs as his 5/50 was complemented well by his skipper Ravichandran Ashwin (2/23).

Sarupam Purkayastha's valiant 125 went in vain as Punjab eked out a thrilling one-run win over Assam in a group A encounter of the Vijay Hazare Trophy, here today to keep their quarter-final hopes alive.

Abu Nechim Ahmed played four dot balls in the final over as Punjab snatched victory from the jaws of defeat.

Batting first, Punjab posted a massive 327 for four with Mandeep Singh (117 no) and Gurkeerat Singh Mann (62) being the chief contributors. Mandeep's 97-ball innings had 12 boundaries and three sixes.

Electing to bowl, Madhya Pradesh bundled out Uttar Pradesh for a modest 211 in 46.2 overs at the Saurashtra Cricket Association stadium. Madhya Pradesh chased the target in 39.1 overs.

Riding on half-centuries by Manender Singh and Ashok Maneria and a four-wicket haul by Tanveer-Ul-Haq, Rajasthan posted a comprehensive 102-run win over Hyderabad.Â Â Â  Â

Put in to bat, Rajasthan posted 250 for eight in their allotted 50 overs and then bundled out Hyderabad for a mere 148 in 39 overs.

Riding on a patient century by opener Aditya Waghmode, Baroda notched up a comprehensive 56-run win over Odisha in a Group C match of Vijay Hazare Trophy at the Palam A Ground here today.

Electing to bat, Waghmode anchored the Baroda innings with a 143-ball 111 which was studded with 10 boundaries. Kedar Devdhar (30), Hardik Pandya (30) and Deepak Hooda (24) were the other batsmen who reached doubles figures as Baroda were dismissed for 225 in 50 overs.

Chasing 226 to win, Natraj Behera stood amid the ruins as Odisha's innings folded for 169 in 46.2 overs.

Jammu and Kashmir's batting collapsed in the face of a disciplined bowling effort as Kerala beat them by seven wickets.

Karnataka defeated Gujarat by 15 runs under the VJD method in their Group B Vijay Hazare match.

Sent into bat by Gujarat skipper Axar Patel, Karnataka were restricted to 233 for eight in the allotted 50 overs at the KSCA Cricket Ground.

Delhi on Course for Quarter-Finals

This is Delhi's third win in four matches and the hosts are favourites to seal one of the two quarter-final spots up for grabs from this group.

Currently, Delhi are second behind Maharashtra in the group C table, with 12 points from four games. Maharahstra also have 12 points but have played a match less.

Middle-order batsman Bawne hit 11 fours and one six in his 143-ball innings, while Jadhav blasted 11 boundaries in 101 balls down the order as the duo shared 194 runs for the fifth wicket to power Maharashtra to 241 for eight in their stipulated 50 overs.

Comments
Topics mentioned in this article
Cheteshwar Pujara Naman Ojha Gautam Gambhir SAU DEL PUN Gurkeerat Singh Cricket
Get the latest updates on India vs Australia Series, check out the India vs Australia Schedule for 2020-21 and Ind vs Aus live score . Like us on Facebook or follow us on Twitter for more sports updates. You can also download the NDTV Cricket app for Android or iOS.