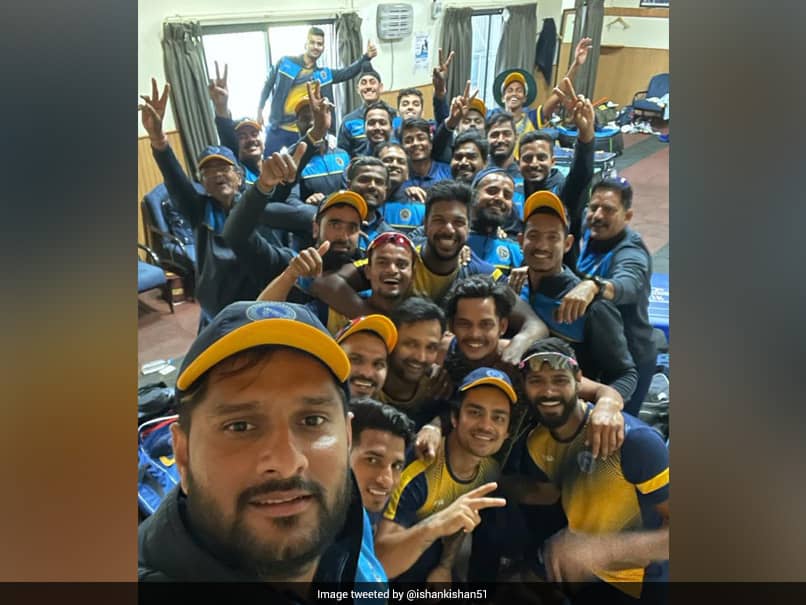 Vijay Hazare Trophy 2021: The Jharkhand cricket team pose for a selfie after their win.© Twitter

Skipper Ishan Kishan smashed a blistering 173 off just 94 balls to lead Jharkhand to a massive 324-run victory over Madhya Pradesh in an Elite Group B game of the Vijay Hazare Trophy, on Saturday. Ishan, who has done well for his IPL franchise Mumbai Indians, served a timely reminder to the national selectors before the white-ball series against England, which comprises five T20s in Ahmedabad and three ODIs in Pune. Invited to bat, Jharkhand posted a mammoth 422 for nine, shaped by Kishan's whirlwind knock, and then bundled out the opposition for a meagre 98 in 18.4 overs, with pacer Varun Aaron (6/37) doing the bulk of the damage.

After Jharkhand lost opener Utkarsh Singh (6) early, Kishan conjured up a113-run second-wicket stand with Kumar Kushagra (26) to lay the foundation for a big score. Kishan, who opened the innings, continued playing his shots before being caught by Shubham Sharma off Gaurav Yadav.

However, there was more action in store as all-rounder Anukul Roy smashed seven sixes and three fours in his 39-ball 72 and ensured that his team went past the 400-run mark.

Aaron wreaked havoc to leave Madhya Pradesh tottering at 21 for five. It was just a matter of time as they were eventually bundled out for 98 as their all top-order batsmen faltered.

Comments
Topics mentioned in this article
Ishan Kishan Cricket
Get the latest updates on India vs England Series, India vs England , live score and IPL 2021 Auction . Like us on Facebook or follow us on Twitter for more sports updates. You can also download the NDTV Cricket app for Android or iOS.