Unhappy Dav Whatmore decided not to renew contract with PCB

The PCB said in its statement that Whatmore had asked to be released from his contract when it came up for review in February next year. 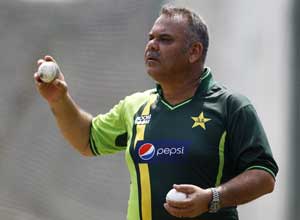 The Pakistan cricket team's Australian coach, Dav Whatmore, decided against renewing his contract after being left upset with Pakistan Cricket Board (PCB) Chairman Najam Sethi's statements regarding his future.

A reliable source in the Board told PTI that the PCB was forced to issue a press statement on Tuesday regarding Whatmore's future with the national team after he informed them he no longer wanted to continue as head coach.

"Whatmore was not happy with a statement from the Chairman, Najam Sethi in Abu Dhabi that the board would be reviewing contracts of the coaches," the source said.

"Whatmore was also not comfortable with the presence and growing influence of manager, Moin Khan in the team in recent times," the source added. (Also read: Former PCB chief Zaka Shraf says Whatmore has failed to deliver)

The PCB confirmed in its statement that Whatmore had asked to be released from his contract when it came up for review in February next year.

"Earlier this month Mr. Whatmore informed the PCB that he would not be seeking a renewal of his contract due to his personal and family reasons," the statement said.

Interestingly in a recent interview on Geo Super channel before the team left for the series against South Africa, Whatmore had said he would like to see Pakistan win the next Twenty20 World Cup and also hinted he would be interested in continuing as head coach.

In a related development, Mohsin Khan -- the man Whatmore replaced as head coach in 2012 -- late night came out with a statement that he would be interested in working as head coach if the PCB asked him to do so.

Comments
Topics mentioned in this article
Mohammad Asif Cricket Stuart Broad Zaheer Abbas Davenell Frederick Whatmore
Get the latest updates on IPL 2020, check out the IPL Schedule for 2020 and Indian Premier League (IPL) Cricket live score . Like us on Facebook or follow us on Twitter for more sports updates. You can also download the NDTV Cricket app for Android or iOS.