Captain George Bailey said on Thursday that Aaron Finch and Phil Hughes will open the batting, with left-hander Usman Khawaja coming in at number three. 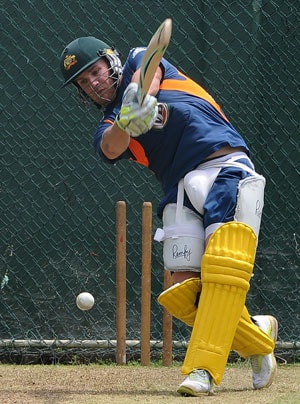 Australia will field debutants in their top three batting spots in Friday's one-day series opener against Sri Lanka in Melbourne, but captain George Bailey denied it was a second-string side. (File photo: Aaron Finch)

Bailey said on Thursday that Aaron Finch and Phil Hughes would open the batting, with left-hander Usman Khawaja coming in at number three.

Bailey will bat at number four in an inexperienced line-up that also includes allrounder Glenn Maxwell, who has only played four ODIs.

David Hussey and Brad Haddin add some experience to the middle order.

The selectors resisted naming a fourth debutant, leaving quick Ben Cutting out of the bowling attack.

That leaves Mitchell Johnson, Mitchell Starc and Clint McKay to fill the pace spots with Xavier Doherty the specialist spinner, supported by Maxwell and Hussey.

Bailey rejected claims he will lead a B team into the opening match of the five-match series.

"For these two games this is the best side that Australia can put out," Bailey said. Selectors on Sunday announced a 13-man squad for the first two ODIs.

Bailey added that it was the perfect occasion for the debutants to shine.

"It's a huge opportunity and a great one.... What you want from your top four, top five (batsmen) in one-day cricket is for them to score the bulk of the runs and to win you the game," he said.

"Whether it's your first game or your 50th game, that expectation doesn't change."