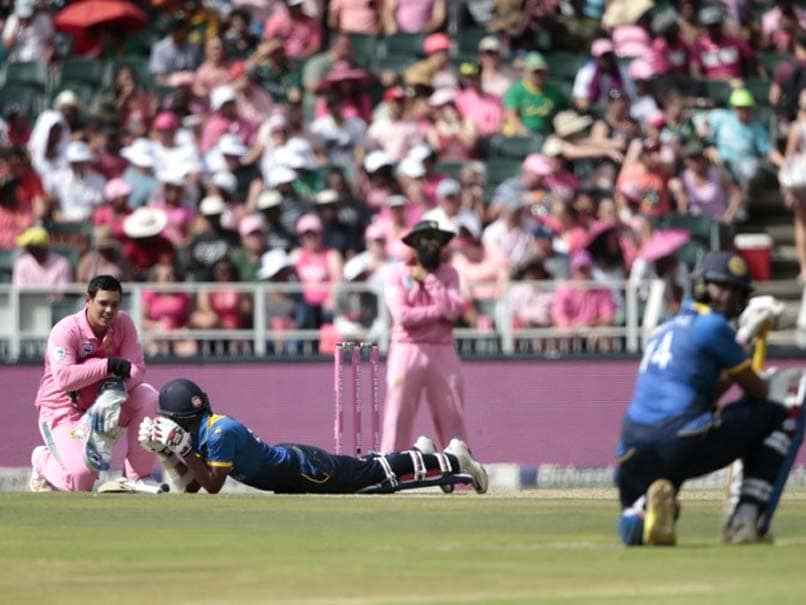 Often rain, and at times dust storms as well, have halted cricket matches. But what happened at the Wanderers in Johannesburg was something that is not seen frequently as a swarm of bees halted play for over an hour and left the teams prone on the pitch during the third One-Day International being played betweenSouth Africa and Sri Lankaon Saturday. Sri Lanka had just lost their fourth wicket with the total on 115 in the 25th over when, with new batsman Asela Gunaratne about to face his first ball, the slip fielders dropped to the ground.

Other players followed and there was a short delay. At one time all 13 players and both umpires were lying face down on the field as the bees buzzed about.

Play resumedbut midway through the 27th over the bees converged on a helmet which had been placed behind wicket keeper Quinton de Kock and the umpires stopped play.

Ground staff at the Wanderers emptied the contents of two fire extinguishers into the swarm.

Swarm of bees at Wanderers. Everyone has dropped to the ground. pic.twitter.com/47tXHGIZRW

The players returned after a delay of more than 20 minutes but again left the field because there were still bees in the area where de Kock needed to stand.

Play resumed eventually which was officially calculated to be exactly an hour, taking into account a drinks break, and no overs were lost.

Comments
Topics mentioned in this article
South Africa Cricket Team Sri Lanka Cricket Team AB de Villiers Hashim Amla Quinton de Kock The Wanderers Stadium, Johannesburg Cricket
Get the latest updates on ICC T20 Worldcup 2022 and CWG 2022 check out the Schedule, Live Score and Medals Tally. Like us on Facebook or follow us on Twitter for more sports updates. You can also download the NDTV Cricket app for Android or iOS.