Stuart Broad emphasises on need for batsmen to set up matches

The centrepiece of England's season will be the Ashes series against Australia starting in July but Broad insisted New Zealand were more than a side show. 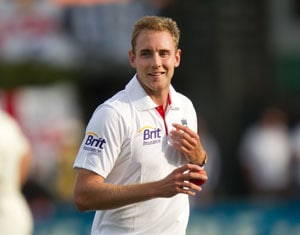 Stuart Broad believes England's top-order batsmen hold the key to victory in their upcoming two-Test series against New Zealand that starts on Thursday (May 16).

While it is a truism that Broad and the rest of the England attack must take 20 wickets if they are to win any Test, big scores from the team's batsmen give bowlers runs to play with and put pressure on the opposition.

That was certainly the case during England's victorious Ashes tour of Australia in 2010-11 where they won 3-1 on the back of a trio of innings victories.

But England's top order found life much harder going in New Zealand where the teams recently shared a three-match series 0-0.

England only escaped a shock series defeat thanks to a brilliant last-ditch unbeaten hundred from Matt Prior, the wicketkeeper, that denied New Zealand victory by just one wicket in the third Test in Auckland.

"Looking back at New Zealand, okay our skills were not as good as they could have been but the fighting character to bat out two days to save matches is the sort of character you need in Test cricket," said Broad at Lord's on Tuesday.

"We are a team that are hard to beat even when we don't play to our best. That's something we can take very positively out of that series."

The centrepiece of England's season will be the Ashes series against Australia starting in July but Broad insisted New Zealand were more than a side show.

"We have a huge summer ahead of us but nothing more important than the first hour here on Thursday," he said. "We can't look too far ahead, we have to focus on the opening bowlers or opening batters doing their job at 11 o'clock on Thursday.

"We are focused only on this week. I think it is very dangerous in a sporting environment to look too far ahead. We know we have a big job on our hands. New Zealand played fantastically well in New Zealand. We were a little bit under par, but we're very determined to put that right."

Comments
Topics mentioned in this article
Cricket England Cricket Team Australia Cricket Team Stuart Broad Kevin Pietersen New Zealand Cricket Team
Get the latest updates on ICC T20 Worldcup 2022 and CWG 2022 check out the Schedule, Live Score and Medals Tally. Like us on Facebook or follow us on Twitter for more sports updates. You can also download the NDTV Cricket app for Android or iOS.