Dimuth Karunaratne posted his ninth Test hundred along with enjoying a record-equalling opening partnership of 161 with Lahiru Thirimanne. 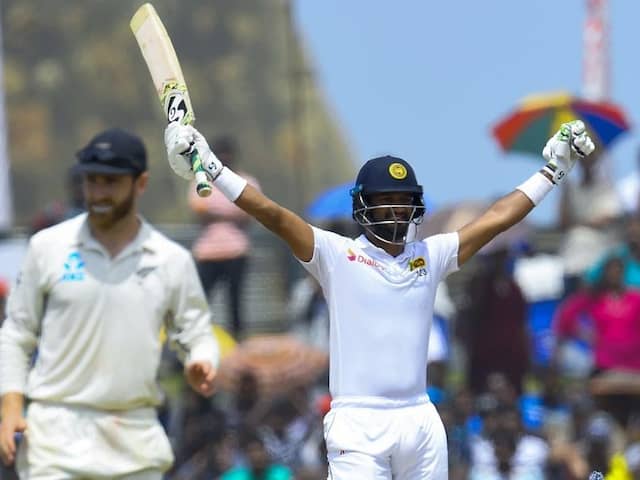 Captain Dimuth Karunaratne scored 122 as Sri Lanka chased down 268 for the loss of just four wickets to win the first Test against New Zealand at Galle on Sunday and take a 1-0 lead in the two-match series. Dimuth Karunaratne posted his ninth Test hundred along with enjoying a record-equalling opening partnership of 161 with Lahiru Thirimanne, who made 64, as Sri Lanka collected 60 World Test Championship points. Former captain Angelo Mathews chipped in with an unbeaten 28 as Sri Lanka finished off the game before lunch after the morning session was extended because only 22 runs were needed at the scheduled time for the interval.

Karunaratne enjoyed some luck on the way to his century, dropped on 58 at forward short leg by Tom Latham while wicketkeeper BJ Watling missed a stumping chance on the same score. He batted for over five hours, facing 245 deliveries, and hit six fours and a six.

Karunaratne and Thirimanne's stand equalled the record for the highest opening partnership in Tests between the two countries. In 1991, John Wright and Trevor Franklin had also put on 161 for the first wicket in Hamilton.

The opening stand was pivotal in Sri Lanka achieving the highest successful run chase in Galle, easily surpassing the previous best of 99. Resuming play on 133 for no loss, Sri Lanka required 135 from the remaining three sessions.

New Zealand finally got their breakthrough when Thirimanne was trapped leg before by William Somerville. Given not out by umpire Richard Illingworth, New Zealand overturned the decision on review.

Kusal Mendis soon fell after taking on Somerville, hitting him for a four and a six from the second and fourth balls he faced.

But when he attempted to slog sweep Ajaz Patel in the next over he ended up hitting straight to midwicket where Jeet Raval completed the catch.

Angelo Mathews joined Karunaratne and the pair put on 44 runs for the third wicket to steady the ship.

Mathews brought up the winning runs with a single to fine leg off Boult.

The second and final Test begins in Colombo on Thursday.

Angelo Mathews Sri Lanka vs New Zealand, 1st Test Cricket
Get the latest Cricket news, check out the India cricket schedule, Cricket live score . Like us on Facebook or follow us on Twitter for more sports updates. You can also download the NDTV Cricket app for Android or iOS.